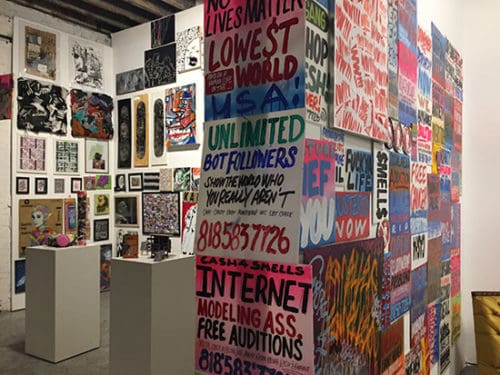 This Thursday evening December 22, local multi-use art space 17 Frost presents its last show before shutting its doors for renovation and expansion. Curator Ellis Gallagher affectionately framed the event as a “celebration of community and art by cohorts and codefendants.” The show will feature well over 200 works by more than 100 artists including former Basquiat collaborator and graffiti icon Al Diaz, the vandal collective Poster Boy, the Iranian-born duo ICY and SOT, as well as Mr. Toll, Skewville, Choice Royce among other street art luminaries.

On January 1, the exhibition space at 17 Frost will shut down for six to twelve months, according to Gallagher. Plans include adding three to four floors to the existing one story structure, as well as a bar and small café. The theater and recording studio, located behind the gallery, intends to stay open save for a couple months during the renovation. In its augmented incarnation, 17 Frost will remain not-for-profit.

Carrying on the spirit and sensibilities of New York City’s avant-garde scene of the 70s and 80s, 17 Frost was founded by childhood friends Steven Pacia and Javier Hernandez-Miyares. Pacia and Cuban-born Hernandez-Miyares grew up as participants in and consumers of creative expression. Reflecting on their shared experience, 17 Frost’s Creative Director Hernandez-Miyares says, “We’d go to these lofts in Soho and Philip Glass would be playing violin and John Cage would be reciting poetry.” Captivating first-person anecdotes of Nico, John Cale and Keith Haring follow. Hernandez-Miyares continued, “This space is a shared sanctuary, and we do it purely for the love of it.” 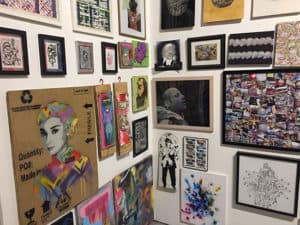 17 Frost began as a music project between the two friends with a recording studio, in part for their band, Sine Parade. Expanding to an exhibition space was “a big step forward” per Hernandez-Miyares. The story behind their first gallery show is quite remarkable—walking under the BQE on Union Avenue, Hernandez-Miyares spots a colorful configuration of gaffers tape, snaps a picture of it and posts it on Flickr. He gets a comment to the effect of, “I did that.” The two connect. And so, 17 Frost’s inaugural exhibit featured a solo show by geometric tape artist Aakash Nihalani, who remains a friend of the collective. 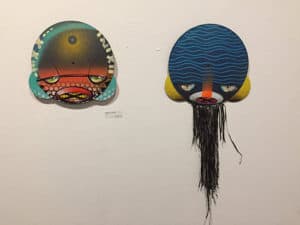 A neurologist by day, co-founder Pacia is not only the building’s owner and 17 Frost’s patron, but like Hernandez-Miyares, he serves as a producer, musician and more within the space. That’s the thing about this community: from creation to cleanup, everyone pitches in. One of the first phrases shared with this writer was, “No one here is too proud to clean the toilet.” To my question of, “Is this your place?” The troubadour and member Roberto Poveda replied, “This is your space.”

Poveda, born and raised in Havana, joined the collective 10 years ago and perfectly embodies its ethos—open, kind and without agenda. He, Hernandez-Miyares and the rest of the family at 17 Frost create for the sheer joy of creation. They make music because they want to and because they must. As Hernandez-Miyares said, no poet writes a poem and thinks, “This is going to be a hit!” 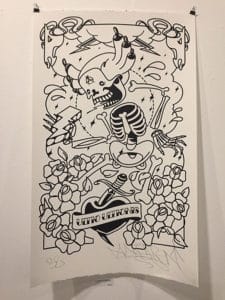 The space has always housed myriad artists looking for a home. From legendary pop artist Jim Dine’s singular works, to more recently actor Michael Shannon’s band Corporal, 17 Frost welcomes expression in all forms. The community somehow maintains, and yes, revives the bohemian sparkle and earnest intent that seems to have been lost from much of art these days, especially in New York. While their doors may be closed for some time, this city needs 17 Frost, and Greenpointers eagerly await its return.