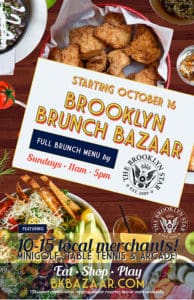 The playful menu from The Brooklyn Star showcases clever takes on Southern and Southwest-inspired favorites (Chicken and Waffles get a drizzle of “hot honey;” French Toast Sticks are a luscious version of street-hawker churros) and gives a new reason for New Yorkers of all ages “to come out and stay” on a Sunday: to eat, shop and play!

After brunch, patrons can find themselves upstairs catching a show or other scheduled program in the historically reimagined Music Venue, already lauded as the best room of its size in Brooklyn.  Dinner service resumes at 6PM, with Sunday game specials on the flat screen TV’s in the Dining Hall. Dinner service hours weekly are from 6PM – 10PM Tuesday through Sunday.

ABOUT THE BROOKLYN STAR
The Brooklyn Star Owner/Executive Chef (and Native Texan) Joaquin Baca was a chef in the Southwest for 10 years before moving to New York, being exposed early on to bold, regional flavors. When he arrived in the city, he was able to dive into the broad-shouldered swagger and occasional genre-bending of Momofuku with partner David Chang.

Baca helped Chang expand the then-small empire with Momofuku Ssam, Momofuku Noodle Bar, and Momofuku Ko—in addition to working to open Ken Friedman’s Rusty Knot along the way. But as the Momofuku empire continued to grow, Baca knew he needed his own place, so he set off to open his own restaurant: the Southern-inflected, wood-burning oven-anchored Brooklyn Star.

In his latest culinary endeavor, the Brooklyn Star at Brooklyn Bazaar. Chef Baca has opened an outpost of the beloved Brooklyn restaurant, as the center-piece of the Brooklyn Bazaar’s own newest venture at 150 Greenpoint Ave. Patrons can experience a counter-service version of his signature comfort dishes, all the while partaking in arcade games, shopping and other novel recreations throughout all 3 levels.

ABOUT BROOKLYN BAZAAR
Having been displaced by BMW from its former home a year and a half ago, Brooklyn Bazaar has made its return to Greenpoint and has taken up residence in the iconic former Polish catering hall, Polonaise Terrace. Brooklyn Bazaar offers a myriad of activities featuring four bars, NYC’s first (and only) combined karaoke/ping pong/mini golf/arcade complex in the basement, a full time anchor restaurant helmed by The Brooklyn Star, an adjacent vendor/events space on the 1st floor and a live music venue on the 2nd floor. For upcoming shows and activities, see their calendar of events.