Osakana’s refrigerator is nearly empty—what’s on display is what’s up for grabs. “In the US we catch fish by the net, but in Japan they catch with a rod,” Osakana manager Emma Kramer said. It’s a reality her team must deal with—as a fishing and island nation, Japan will always have the upper fin, as it were. But it’s not a fact that will hinder Osakana’s near sacred handling of food. 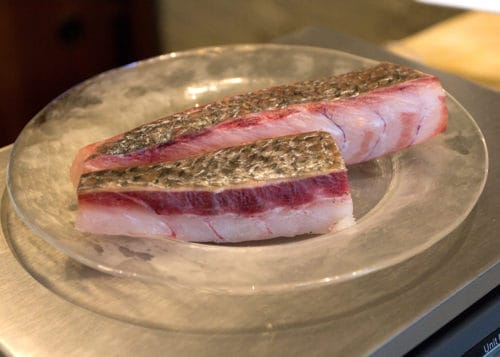 Osakana’s reverence in purposing the whole fish is not just for unlocking its illuminative umami. “We’re trying to teach people how to handle their fish better,” Kramer said.

Each morning, a team member heads to the Fulton Fish Market to find uncut seafood, allowing the kitchen to recycle fats into spicy oils and flavor ramen broth with heads that are often disposed. This philosophy factors into Osakana’s Mottainai approach. “Mottainai is a Buddhist principle that basically means don’t waste your time, don’t waste your talent,” Kramer explained. Every nutrient is extracted, every organ finds a home.

This creed served as owner Yuji Haraguchi’s north star when he first opened Osakana’s sister business, the nearby restaurant Okonomi (150 Ainslie Street). Before that venture Haraguchi had worked in Boston as a fish purveyor, importing fish from Japan and proposing them to upscale eateries. “We opened the restaurant first to introduce people to eating different kinds of fish,” Kramer said. “Then people wanted to buy fish from us at the restaurant, and Yuji saw the need for this place, this always being his intention.” 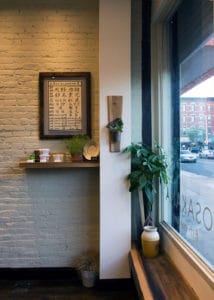 Okonomi has been open for three years, Osakana for just under three months. Already the market has regulars who pop in and scan the daily catches (all American-caught), order a takeout special, or chat with Emma about how to best prepare the next fish they’re experimenting with. For ease, some fish are prepped and flavored. “It’s much simpler to grab and cook those fish because they’re pre-seasoned, so you can just stick it in the oven, eight minutes, and Bob’s your uncle—you’re done,” she said.

When the shop isn’t selling seasonal fish and to-go meals, Osakana doubles as an event space, hosting classes that range from how to prepare ramen to “50 Shades of Tuna,” where guests learn how chicken of the sea’s cut and color dictate taste and species. Attendees can even learn to create their own rolls at private temaki sushi events. “We put out a beautiful assortment of fish and vegetables, we give a quick demo, and then people hand roll, drink beer, and have fun. They’re great for all ages, the goal being that people will bring it into their own homes,” Kramer said. 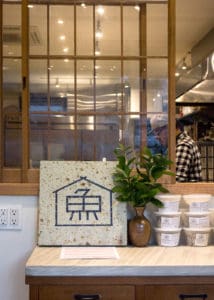 But with classes almost every Saturday, “Sashimi at Home” is the most popular event. “I didn’t have a lot of Japanese cooking experience before I came here, though I worked in food my whole life,” she shared. “I always thought sashimi was just high quality sliced raw fish, but it extends so much further. We do this cool thing where we torch the skin, making it crispy and giving it a flavor contrast to the taste of the fish. We find a way to give the skin purpose. We do torching, soy sauce curing, seaweed wrapping—lots of different techniques we’ve been teaching people to use at home.”

The various classes’ current focus is Japanese cooking, but Kramer said Osakana will soon have classes simply about cooking fish and doing so with other cultural bents. The fish market is also looking to deliver meals via UberEATS and Caviar.

This intrusion of twenty-first century convenience may seem at odds with Osakana’s methodical culinary groove. But pay a visit to the minimalist shop, and after ordering watch the chef trim the skin, marinate the meat, and wait. Add in the scent—not one of fish eyes sticking out of supermarket ice mountains, but a refreshing cocktail of scallion and sea—and you may forget you’re in Brooklyn.