Bringing Back Our Oysters with Billion Oyster Project 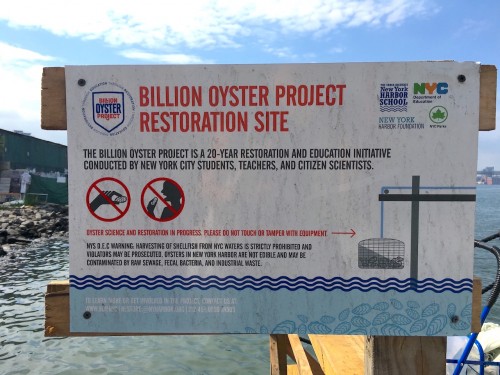 It’s hard to believe now, but there was a time when New York’s waterways were teeming with oysters. They were not only great for eating but also served a very vital function in our ecosystem: they helped filter the water. Alas, they ended up being too good as food, were overharvested, and any beds that did survive were seriously harmed or killed by the extreme amount of pollution poured into all of our waterways over the past 300 years. But there is an organization trying to bring the oysters back (but no, not for eating): Billion Oyster Project (BOP). BOP serves two purposes; it engages students in STEM education programs while also working to restore our harbor. BOP was actually founded in 2010 as an extension of student projects at the New York Harbor School on Governors Island.

Using oysters to restore a waterway’s ecosystem has gained a lot of traction over the past few years, especially along the East Coast and in the Gulf of Mexico. Oysters take heavy metals, nitrogen, and other toxins out of the water, just like your Brita filter. Nitrogen is important since it is food for algae and other plants, but takes oxygen out of the water, which hurts the animals. Oyster beds also stabilize the sea floor, protecting our shoreline. BOP estimates that in the 1.05 acres of oyster beds they’ve created, over 10.9 trillion gallons of NY Harbor’s water has been filtered and 6.75 million pounds of nitrogen has been removed. All of those heavy metals and junk bioaccumulates in the oyster so don’t expect to see them at your $1 oyster happy hour anytime soon. (Note: anyone who fishes in our waterways should really limit their intake.)

Students who work on oyster restoration beds get the full experience of BOP. They learn SCUBA diving, raise oyster larvae, build and maintain oyster nurseries, design equipment and perform long-term scientific research projects. The Harbor School hatchery now grows more than 10 million oysters a year! It is such a success with NYC school children that last year, BOP won a three-year, $5 million grant from National Science Foundation to start the Billion Oyster Project Curriculum and Community Enterprise for Restoration Science (BOP-CCERS). This program aims to help more public school children learn about ecosystem restoration and environmental field science. But the fun science experiments aren’t only open to them! Adults too can get into the action by becoming citizen scientists and maintaining their own oyster restoration sites all over the five boroughs.

Earlier this year, Billion Oyster Project trained two citizen scientists, Katy Einerson and Johanna Phelps, to care for two oyster restoration stations off The Brooklyn Barge and Transmitter Park—some of you may have noticed the sign at the base of Transmitter Pier earlier this summer. Unfortunately, the Transmitter Pier station was tampered with (thankfully, it was saved), and The Brooklyn Barge is kindly allowing them to reside off of their side dock until winter. At that point, they will most likely move back to Transmitter Pier and hopefully not be messed with. Interesting note: Brooklyn Barge says that when they did the underwater examination of their site prior to moving in the barge, they did see former oyster beds. Neither Katy nor Johanna is a scientist, they got involved because it seems cool and fun to be a “citizen scientist” and caring for a station isn’t the biggest time commitment (you sign up for two years, collecting data four times each year, typically during warmer months). The training involves spending a day on Governors Island to learn the protocols and costs $100 for most of your station’s equipment.

I joined Katy as she checked her site earlier this month. A site visit involves recording the weather, tide, and surrounding water quality; counting and measuring the live oysters; and analyzing what mobile and sedentary organisms are living on the trap (we found crabs, algae, sea squirts and worms). Oyster restoration can’t start without discarded oyster shells. Baby oysters (spat) attach themselves to the shells since they signify a good place to set up a home and grow. To help with this, BOP partners with a number of restaurants and stores, including the new Williamsburg Whole Foods, to collect their discarded shells for future oyster beds.

With a goal of one billion oysters in New York Harbor by 2035, BOP needs all the help they can get. If you’re interested in becoming a volunteer, there is one more citizen scientist training this year, Friday, October 7th, and a couple more volunteer days at the Governors Island facility. If you’re a lover of boats, BOP will be hosting their annual fundraising regatta on Friday, September 16th.

Boats will be launched from the Brooklyn Bridge Park Marina, and the race will be followed by a bash on the Governors Island Beach, catered by some of New York’s finest restaurants. Guests will be able to tour BOP facilities, as well as meet the students and staff involved in BOP. And, of course, copious oysters for slurping. Or, you could just become a frequent oyster-eater at these restaurants (Williamsburg’s Midnights, Maison Premiere and Lighthouse are on the list), and contribute your leftover shells to the project. Lastly, if you or anyone you know has access to an East River pier and are interested in hosting a site, connect with BOP to discuss the opportunity!