Last, we clue you in to some shows beyond this weekend that you should ticket up now before a sellout, like for Erykah Badu and Angel Olsen.

First though I’ve been thinking about the Grand Vic closing. I think these club closings are no longer simply about the rent being too damn high.

I think the real problem is there is no central place to find out what bands are playing in the neighborhood, no trusted, comprehensive guide to pull people into the clubs.

That’s ridiculous, you’re thinking. There are a ton of resources, from Brooklyn Vegan, the Village Voice, Time Out New York, this column . . .

But go to some of those sites and look what happened. Both TONY and the Village Voice are shells of their former selves. They carry maybe 5% of the listings and descriptions they used to back in their heyday. Brooklyn Vegan mainly sticks to punk and indie pop bands.

Free Williamsburg, Bushwick Daily, Brokelyn, and I are all going to give you recommendations, but not complete listings. And you shouldn’t have to open up a thousand tabs on Chrome to check each venue’s show lineups. 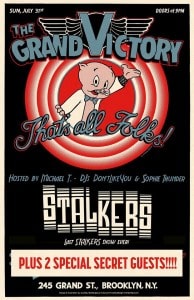 But lately I’ve become a fan of Facebook’s Events page, as a possible answer to the problem. I like the democracy of it — clubs and bands don’t have to pay to publish an event page, and Facebook ties in your interests, location, and shows your friends are going to see to prioritize results.

So I think that’s a light at the end of the tunnel. Back to the tunnel. Here’s what’s up at Grand Vic this weekend.

Tonight has Metalleg, Boytoy, and Thick playing. Metalleg does up reckless garage rock and compatibly juvenile video accompaniments, as per below.

Then Saturday there are three shows. In the afternoon, starting at 3, is their usual free acoustic matinee, with Emily Rupp, Matt Monahan, and Joe Dorane playing. Sadly, this reminds me that one of the few local venues that still hosts folky songwriters will be no more. 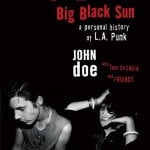 At night, John Doe (from legendary LA punk band X) and Morgan O’Kane play starting at 8, then Born Loose and Live Ones come on for the late show at 11.

Sunday it’s their usual hardcore punk afternoon show with Subzero, Antidote, and Ultraviolence playing, starting at 2:30. The close-out Sunday night has The Stalkers, a couple of surprise bands promised, and DJ’s Sophie Thunder and Don’tlikeyou, beginning at 9 pm.

Here’s a Spotify playlist that veers wildly across genres with those bands. It’s full albums, so probably best to put that puppy on shuffle. (Also you have to log into Spotify first before clicking, or the link won’t work).

After, you can soak up the alcohol with dinner across the street (oh the options — fried chicken at the Commodore, smoked beef ribs at Fette Sau, cheese-saturated Mex at Taco Chulo . . . maybe I don’t always go to Knitting just for the bands).

Amble back to see The Peach Kings play at Knitting around 9:30 pm. They have a lot of rock guitar in their sound but it plays funky with a sexual charge. So, good for a date, or finding one. Here‘s a sample.

Alternatively, if you are more to the north in Greenpoint or St. Vitus is one of your favorite clubs, check out their picks for electronica on Saturday. Odonis Odonis is the headliner, and their sound is what you’d expect at a metalhead bar – industrial, angry, bleak.

Public Memory, on the other hand, while carrying an undercurrent of menace, is more optimistic and dreamy. It’s put together by fellow Brooklynite Robert Toher, here‘s a sample.

GRT and Multiple Man round out the St. Vitus lineup. Doors open at 8:30.

Finally, as promised, those looking for tickets to see Erykah Badu DJ at Output next Wednesday should go here. Bonus, Natasha Diggs also spins that night. And Angel Olsen fans can see her at Warsaw on September 18th, but probably only if they buy tickets around now.