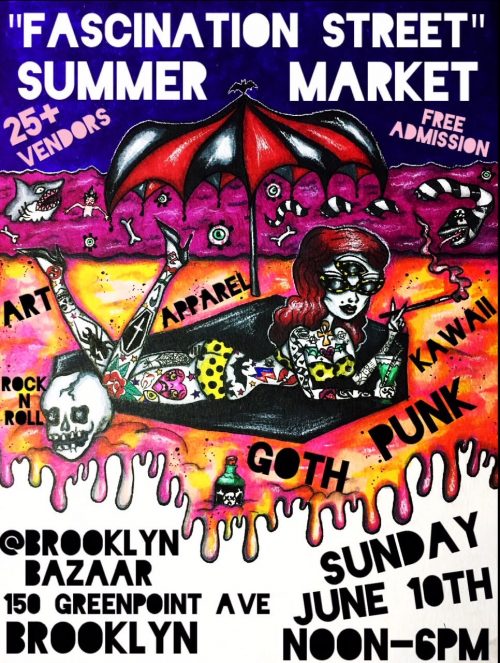 Punk power clothing brand Molly Monroe is hosting a gothy, rocky, punky makers market at Brooklyn Bazaar (150 Greenpoint Ave) on June 10th from 12pm-6pm. Fascination Street Market is a punk rock flea market happening four times a year and featuring more than 25 NYC based artists, vendors and live music. Each artist will be selling one of a kind handcrafted clothing, jewelry, cosmetics, artwork and odds and ends. Check it out!

END_OF_DOCUMENT_TOKEN_TO_BE_REPLACED

B Boys definitely got the crowd amped up for Brooklyn headliners Parquet Courts. The band’s been around long enough to be able to wistfully (and perhaps bitterly) reference the dwindling Brooklyn DIY scene and the Elsewhere owners’ fallen former venue. When the crowd started catapulting their drinks at the stage during the second song, keyboardist Austin Brown quipped, “This isn’t Glasslands, you can’t throw shit.” And being a band born in Brooklyn in the mid-aughts certainly they’re clearly schooled in the art of playing to a house full of intoxicated locals donning flannels, thick-rimmed glasses and vintage Fugazi shirts. But this time, the scene was different. It was Elsewhere. END_OF_DOCUMENT_TOKEN_TO_BE_REPLACED

It’s always a treat when Thee Oh Sees go on tour and play a few shows in Brooklyn. I always make it a point to go at least once because it’s nothing short of awesome. Thee Oh Sees psyched out the crowd at the Warsaw (261 Driggs Avenue) with dynamic jams with loud-meets-fast-riffs.
END_OF_DOCUMENT_TOKEN_TO_BE_REPLACED

Cro-Mags and Eyehategod at St. Vitus this Sunday (8/27)

Two old-time bands with a lot of hard time put on the road are doing both a matinée and a sold out evening show at St. Vitus (1120 Manhattan Ave) this Sunday (8/27) as part of their Left to Starve summer tour.

Of course calling either band old-time is just asking for a beating, because it’s generally not too safe to antagonize a hardcore punk band (Cro-Mags) nor a metal/hardcore/southern sludge band out of New Orleans (EyeHateGod, or just “EHG” for you texters).

I’m sure both these bands have been jumped by a pack of chin-less white supremacists more than once in the past with the band coming out ahead.

And it’s not right to consider their sound old-time, when that’s changed quite a lot for both bands, and in all the right directions. END_OF_DOCUMENT_TOKEN_TO_BE_REPLACED

END_OF_DOCUMENT_TOKEN_TO_BE_REPLACED

Last, we clue you in to some shows beyond this weekend that you should ticket up now before a sellout, like for Erykah Badu and Angel Olsen. END_OF_DOCUMENT_TOKEN_TO_BE_REPLACED

Thanksgiving has the biggest club night of the year.

But 4th of July, it’s like a blizzard hit here. Greenpoint empties out. Major venues don’t even bother to put on a Saturday show.

Waking up at 4 AM this morning, I fumbled around on my iPhone for podcasts to kill time until dawn. Garrison Keillor’s show came up first.

Keillor always ends with a poem, and on this episode it was Route Six by Stanley Kunitz, that follows the poet’s summer road trip to Cape Cod with his wife.

To get everyone into the spirit of our own quickly approaching day trips to the beach, I match the mood of Kunitz’ poem by quoting it alongside this weekend’s best live music. END_OF_DOCUMENT_TOKEN_TO_BE_REPLACED It’s that time of year when it seems like every band in Brooklyn has decamped for the South by Southwest festival in Texas.

Without large audiences and crowded band lineups around town these days, it’s a chance for introspective music to have its moment.

It’s a good time to hear bands live that unravel themselves slowly, and open your mind to a broad landscape.

Even our punk pick this week is more suited to chill California than the inside of a dark New York bar.  END_OF_DOCUMENT_TOKEN_TO_BE_REPLACED

Weekend Music Picks: From Club to Bluegrass with Headbanging in between (3/27-29) There is a spirit of cautious optimism in our neighborhood this week. Ice has disappeared from the sidewalks. There are fewer sightings of G train commuters cobbling together bus and Uber rides after unannounced service delays. In fact, some have even suggested that the G is a more reliable train than the neighboring line to our south. It’s a great time to celebrate with some notable live music.