According to the pundits, primaries this Tuesday could seal the deal for both Clinton and Trump. That is a great thing for this country, at least during the campaign season.

Imagine being trapped with Cab TV ads from Cruz and Rubio (meaning: “brokered” candidate Ryan) during your entire failed-second-date ride over the Williamsburg.

With Bernie we would at least get some bounce music rallies in New Orleans, but his projected delegate count is not great, so he might not be around much longer.

Now at least we’ll have in-your-face punk diva Trump. And Clinton’s got a thing for smooth-jazz bad boys. Granted, after the election, reality might set in. In the meantime, the political ads should be more entertaining than usual. Here’s my local club-hopping campaign trail for this weekend. 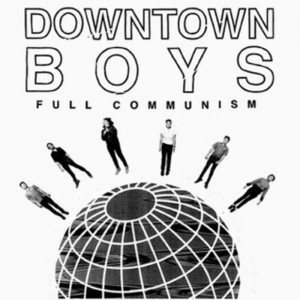 Are you an angry young person? The Downtown Boys play their Commie punk at Baby’s All Right on Saturday night (2/27).

Don’t be fooled by the Sold Out designation on the club’s website, that stretch of Broadway is recently very popular with sleazy Manhattan rich guys looking to score with some Alternateen, as shown by this Uber survey. They seem to routinely buy up the advance tix for shows there, regardless of the act.

But my guess is those folks are going to scatter like ashes when they hear the politics of this band. That should free up some room for real fans.

Maybe your politics are left-wing, but your personality is more hippie chill than angry.  There are a few nice options for you people, starting with Blunt Prophet‘s hip-hop at the Knitting Factory on Friday (2/26), and next day the brassy, laid-back New Orleans tracks of the Soul Rebels at Brooklyn Bowl.

Then Sunday (2/28) you can ease into the day with an 11:45 AM screening of Where The Wild Things Are at Nighthawk Cinema, with its great soundtrack featuring Karen O.

For right-wingers, I’m figuring you’d like a cold beer and some solid no-nonsense country music from The Gentlemen Callers at Skinny Dennis on Sunday afternoon. Or maybe you’d like the muscular sound of Snafu, followed by the libertarian-friendly lyrics of metal band Cannabis Corpse, both playing Sunday night at St. Vitus.

Those who want to put politics aside and just have fun can enjoy the hardcore-influenced rock of Live Girls!!! and The Jacked Bennies (a/k/a The Jack Bennies) at Grand Vic on Friday night.

Click on the club name hyperlinks above for set times and locations.

And here’s a Spotify playlist for all the acts.