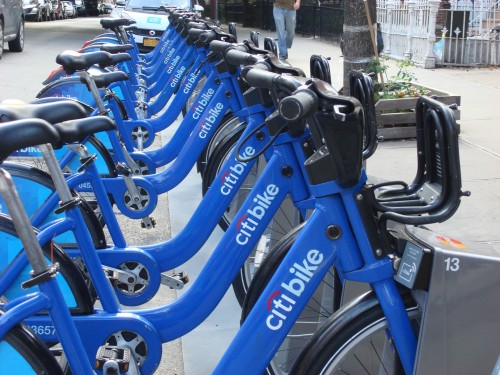 Whether you what to cheer or sneer, Citi Bike has begun the first wave of its Greenpoint bike installations. Over the weekend, rows of blue bikes cropped up on streets like tactical operatives ready to whisk us off at any minute. Following in the footsteps of other bike sharing programs in cities like Paris, Rome and Mexico City, Citi Bike’s expansion into Brooklyn was designed to ease city street congestion and give commuters an alternative means of transportation.

Until the end of this month Citi Bike is luring new customers by offering a $25 dollars discount off the $149 yearly membership. Sign into the Citi Bike club and you’ll be able to take those shiny new wheels to your next destination, so long as each ride is 45 minutes or less.

Before you hit the starting gate familiarize yourselves with NYC’s bike riding traffic rules. And now, without further adieu, let’s check out where all these blue babies are parked around the hood.

As of Wednesday August 19th, Greenpoint has 9 new bike stations installed on:

And as of Saturday August 15th, Williamsburg got an additional 7 stations including:

By the summer’s end, Greenpoint and Williamsburg will see a whopping 53 Citi Bike stations installed from as far up as Eagle and Franklin Streets down to Bedford Ave and South 9th Street.

And that’s not all…

If you think 53 stations sounds like lot blue bikes on the road, well think again. Since 2013 Citi Bike has installed 6,000 bikes at 332 stations, and with its recent foray into the boroughs, the rental sharing program expects to have 12,000 bikes available at over 700 locations by 2017. Talk about a lot of cyclists!

While the bike sharing program is meant to be a fun and sustainable way to commute in a city with serious traffic congestion, some haven’t seen that way. Residents opposed to the program have voiced concerns over reckless bikers on city streets and the death of neighborhood parking spaces. On the flip side, other neighbors welcome the bike expansion as a way to alleviate the lack of quality transportation up here in North Brooklyn.

Greenpoint for many years has been a very bike friendly place precisely out of necessity. So whether you love Citi Bike’s expansion into our neighborhood or loathe it, the blue bikes are here to stay.

For more information about how to sign up, please visit the Citi Bike website for more details.