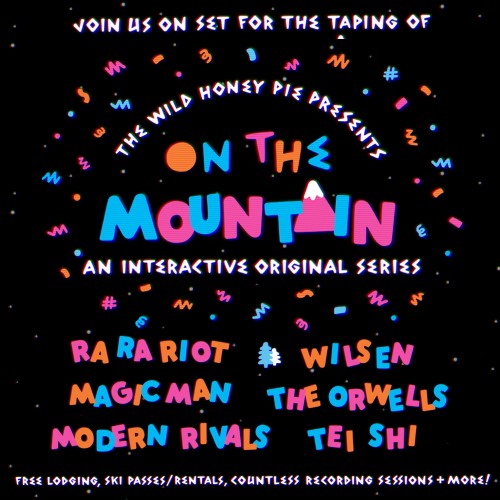 If you love music, videos, community, innovation, and fun, I hope you follow The Wild Honey Pie. It is a Greenpoint-based “online publication, music media, and events promotion collective.” I recently spoke with founder/CEO Eric Weiner and editorial director/CFO Lauren McKinney at the Wild Honey Pie home office on Franklin Street. We talked about many things including their upcoming second season of On the Mountain, an interactive recording series that will feature six bands and provide free lodging, ski passes, and rentals to 100 lucky music fans to participate in the taping. Read on for the conversation and details on how you can be part of the event.

Let’s talk about On the Mountain. Last year, The Wild Honey Pie launched their first interactive music video series, Welcome Campers. They shot performances of six bands over the course of a full day at a summer camp and brought a bunch of music lovers along for the ride. The event was such a success that Wild Honey Pie was able to move from summer camp to ski trip, unveiling a new series in the winter called On the Mountain. Guests got to see six bands play at Stratton Ski Resort in Vermont and enjoy a complimentary ski pass, equipment rentals, and one night of lodging. Obviously being there would be the ideal experience, but anyone else can enjoy the excellently shot and recorded videos in a “choose-your-own-adventure” fashion.

The team is all set to do it again, with Season Two happening December 12 to 14. That’s right, it’s now a three day extravaganza. The lineup is killer, too, featuring Ra Ra Riot, The Orwells, Wilsen, Magic Man, Modern Rivals and Tei Shi. And as I mentioned before, 100 lucky individuals are eligible to attend. Every guest is selected via lottery, so if you’d like to be in the mix, go here to RSVP. It costs you nothing, win or lose. Oh, and if you really want to increase your chances, you can post a picture of yourself in 80’s ski gear on Instagram. Wild Honey Pie will select 10 guests that way. Good luck!

I think these interactive experiences are a brilliant idea. Not only does it package music videos of cool bands in an exciting way, it is all but guaranteed the guests will have a wonderful time socializing. It’s community building both physically and virtually. Besides Welcome Campers and On the Mountain, which will each have two seasons by year’s end, Wild Honey Pie debuted On the Boat, a nautical series at Newport Folk Festival, and Spooky Mansion for Halloween. Over time, the videos have taken on more narrative elements and involved the attendees to an increasing degree, making it truly immersive.

Eric and Lauren told me all four of these series will be back in 2015 and there are others in development. Video has always been at the core of Wild Honey Pie. They have been doing Buzzsessions for years and they also have created some official music videos for bands. Events, known as the Beehive, are a mainstay as well. They put on showcases at SXSW, Northside, and CMJ, and will be expanding the lineup next year. The bee theme is perfect, because the Wild Honey Pie produces sweet goods through a flurry of collective activity, and they are by no means content to rest. I can’t share all the forthcoming things they mentioned, but rest assured that this group is going to continue to be spectacular and groundbreaking. Just keep an eye on their site, YouTube channel, Facebook, and Twitter.

I met Eric and Lauren at their home office on Franklin Street, which contains many apian touches, including a sheep dog poodle mix named Buzz who is something of a mascot. I love that something like Wild Honey Pie is based in our neighborhood. Anytime you have great people looking to collaborate and build something for a like-minded creative, passionate community, Greenpoint gets a little more awesome. Here are some excerpts of our talk:

Greenpointers: How would you describe the Wild Honey Pie and what it does?

Eric Weiner: We are building a media company as a creative agency. We focus on events, original video content, and a blog. We innovate in those spaces and enhance everything through technology. We consider ourselves an ally to everyone in the music business. We’re helping facilitate the relationship between bands and audience.

The Wild Honey Pie has always been about curation as opposed to critique. I think we tend to focus on where pop meets indie, sort of “indie for the masses.” Everything we do and everyone we feature is someone we genuinely love.

Lauren McKinney: Yeah, we would never crush a baby band. And everything we do is meant to be consistent and digestible.

Eric: Our foundation is not being cool. I’d say it’s playful, accessible, and friendly. We want to be the friendliest music discovery portal.

Greenpointers: How did it begin? Can you take me through the history?

Eric: I started The Wild Honey Pie in the summer of 2009. I was in Boulder, Colorado, finishing up school. It was a food blog actually. But then in August, I went to work for MTV in London and shifted it to focus on music.

I’m from New York City, so I came back when all that was done. I had a video background, been editing since high school and I filmed the football team in college. I bought a flip cam and went to shoot Freelance Whales on a subway platform. I called it a Buzzsession.

We put on our first show 11/11/10. The bill included Lady Lamb the Beekeeper, Arms, Alberta Cross, Forest City Lovers. We sold it out, I never saw the Living Room more packed. We did Eventbrite’s first ever SXSW showcase the next year, that had the Jezebels, Jukebox the Ghost, Snowmine.

In 2011 I started working as a music coordinator for the MTV Show “I Just Want My Pants Back” but I kept doing everything for Wild Honey Pie during all my free time. Some of my work time, too, haha. I was building up our collective. Doing things like “Honey I’m Home,” the video series we shot at band’s apartments or studios. MTV was never quite the right fit and I was always thinking about new ideas. After about two years, my contract was ending and I was like “What do I do? Maybe AR?” I did NOT want to work for a record label.

I was thinking about it and realized I liked doing the themed buzz sessions. I also had been wanting to do something at this property my parents own in Westchester. Felt like a summer camp. I got into the idea of combining them and realized if you do summer camp, you need campers. That’s where the interactive series really came from.

PR people did not get it, so that first one was sort of a proof of concept. And it really cemented us as a creative agency. We do natural advertising that is authentic and transparent. Anyways, we shot it all then had a premiere at Wythe Cinema.

Greenpointers: The events are such a cool idea.

Eric: Yeah. They’re about breaking down walls and meeting new people. All the guest have tons of fun. They’re partying with their favorite bands, they’re participating in the video shoots. People are hooking up.

We keep pushing it. We hired a professional make up artist for Spooky Mansion, which took that to the next level. We have some awesome ideas for this upcoming On the Mountain season.

Lauren: We let everyone bring a friend so they know at least one person, but it becomes very social.

Greenpointers: Yeah, that comes through just from watching. I really like that it seems to be adding story elements. The saloon shoot with Rubblebucket, for instance. What else is in the future for Wild Honey Pie?

Eric: That is definitely something we are going to do more of, the narrative thing. We have a lot coming up next year and beyond. Besides all of our interactive series and signature beehive events and regular content, we are looking at creative ways to expand while still staying true to our vision.

Our growth this year was explosive. We are building our team in other cities, especially LA and London. [The new Buzzsession with Fear of Men comes from the UK team]. It’s very cool because so many bands are coming to us to work together. Even some big ones. We are thinking about ways to work with some of these acts, only the one we love, in ways that will boost smaller artists.

One thing we are looking is making the recordings from all of our Buzzsessions and series available for purchase. People ask for those all the time. We see an opportunity to pay artists more. Our model is based on growing opportunities, so we would use that money strictly to pay artists and the crew. We wouldn’t take anything from those sales. And you will never see a pay gate on our content.

Lauren: We are still always searching for new music, for new bands to fall in love with. That’s always a part of it.

Greenpointers: Are either of you musicians?

Lauren: I play a little guitar and have a midi.

Eric: I think of musicians like magicians. I don’t know how they do what they do, I don’t want to, but I love it.

Greenpointers: What do you love about Greenpoint?

Eric: So much. We’re always at Eagle Trading Co. I love Five Leaves, especially the truffle fries. And bacon. And Moroccan Scramble. And the mussels.

Lauren: We like to go dance at Manhattan Inn.

Eric: And get free sake at Wasabi. Greenpoint is awesome. We are happy to be part of a community with other great people like Secretly Canadian and Kickstarter. We plan to stay here a long time. Oh, and I love to walk Buzz in Transmitter Park.