There’s been a lot happening in the food world, Greenpointers! Let’s play catch up.

First off, Bushwick’s famed Roberta’s (261 Moore Street) has sure come a long way from making their pizzas on a portable grill, jailhouse decor and topless servers—they are officially coming to the Williamsburg waterfront, in the new Domino complex. We can expect them to open in Fall 2019. END_OF_DOCUMENT_TOKEN_TO_BE_REPLACED

END_OF_DOCUMENT_TOKEN_TO_BE_REPLACED

Here are the highlights from last night’s meeting (which ran over by about an hour):
END_OF_DOCUMENT_TOKEN_TO_BE_REPLACED

Show Your Support for Silent Barn Tonight (7/7) at Brooklyn Bazaar!

North Brooklyn’s music scene is thriving, though our smaller and DIY music and performance venues are dwindling. Greenpoint’s favorite Manhattan Inn closed late last year, to much neighborhood disappointment. Shea Stadium recently shut its doors once again a few weeks ago, for apparently the last time. Legendary venue Don Pedro’s sang its swan song earlier this year. Secret Project Robot, which was a pioneering Williamsburg art/performance/weirdness space back in the early aughts, now located in Bushwick, somehow is managing to stay alive, having recently reopened again.

And now Silent Barn (603 Bushwick Ave), having finally received its liquor license, is asking for financial help. And to keep things on the up-and-up, they’ve released their official financial history and budgets to the public. Brooklyn Bazaar (150 Greenpoint Ave) is hosting a benefit show for them tonight (July 7) at 7pm, and tickets are $10. There will be a 15-minute Q&A with Silent Barn’s Financial Manager Jordan Michael Iannucci, plus sets from Fits, Peaer and Crosslegged. END_OF_DOCUMENT_TOKEN_TO_BE_REPLACED

The Hum, in its 5th year, is a magical project put together by Rachael Pazdan. Pazdan, music director at the Le Possion Rouge, unites female artists who have never worked together to create new music for an all-female performance series for five nights. In past years it was held at Manhattan Inn (RIP), but this year Good Room (98 Meserole Ave) is hosting all the events except one which will be held at Le Poisson Rouge. This past Monday’s session was serene, synth-ful and sinful, and full of dance-like beauty. Each group was seamless and fluid in their collaboration, making it appear that they must have worked together before. These groups that played involved several powerhouses, including Kissey as well as Sadie Dupuis (Speedy Ortiz). END_OF_DOCUMENT_TOKEN_TO_BE_REPLACED 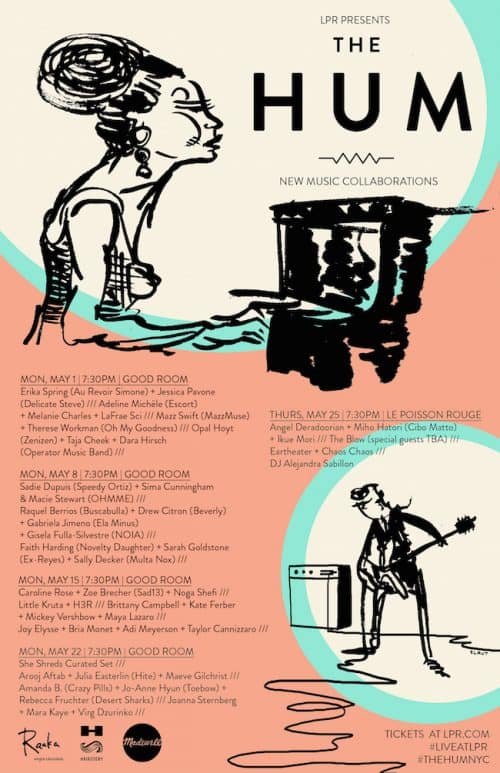 If you’re a music fan in North Brooklyn, you’ve probably heard of The HUM, a kickass all-female music fest. In past years, it was held at the now shuttered neighborhood fave Manhattan Inn, and this year Good Room (98 Meserole Ave) is playing host. Last week, Erika Spring from Au Revoir Simone took the stage with several other megatalented megababes. Tonight’s show (which we will be covering) features Sadie Dupuis of Speedy Ortiz plus a solid lineup of additional female powerhouses. Tickets ($15) will be available at the box office tonight, and you can get $12 tickets online for the upcoming shows. Rock out with your frock out! END_OF_DOCUMENT_TOKEN_TO_BE_REPLACED

The Evolution of Jazz with Angela Morris

If you’ve heard live music in Brooklyn, there’s a good chance you’ve come across the multi-hyphenate and chameleon performer Angela Morris. She often performs around North Brooklyn, frequenting venues such as Silent Barn, Trans Pecos, and Legion, along with now-closed experimental powerhouses Sunview Luncheonette and Manhattan Inn. Blurring musical genres and marrying avant jazz with pop, her music is at once whimsy but wise, stirring yet relaxing. But labeling Morris’s style may be futile; her timbre shifts depending on the night and her role. Morris plays multiple instruments with almost as many bands — including Rallidae, TMT Trio, and Pep Talk — all the while conducting, singing, or switching between strings and woodwinds. Here, she discusses her move from Toronto, Brooklyn’s evolving music scene, and — despite the strains of a performance-induced injury — what continually motivates her to share her craft. END_OF_DOCUMENT_TOKEN_TO_BE_REPLACED

So Long, Farewell… The 2016 Venue Graveyard

So, after the jump, here’s our list of who in the neighborhood bit the dust this year. It’s worth mentioning that we’re hopeful about 2017; Brooklyn Steel will be opening in East Williamsburg this coming April, this past year Brooklyn Bazaar opened in the old Polonaise Terrace banquet hall, The Lot Radio opened in May and has quickly become a neighborhood fixture, and Secret Project Robot just signed a lease on a new space, and there are still plenty of great venues in the neighborhood to catch some great music. END_OF_DOCUMENT_TOKEN_TO_BE_REPLACED

There are more events in our weekly calendar, and more Halloween picks here! Submit Greenpoint events, too!

Watch the Election Results come in on the big screen @Sottocasa Pizzeria Williamsburg (232 North 12th St) Tuesday, 11/8, 7PM Celebrate or commiserate with 2-for-1 drinks specials, like the “That Nasty Woman” or “The Deplorable”, as states are won and lost. Win a round or Nutella pizza by competing in short rounds of presidential. [Sponsored]

There are more events in our weekly calendar, and more Halloween picks here! Submit Greenpoint events, too!