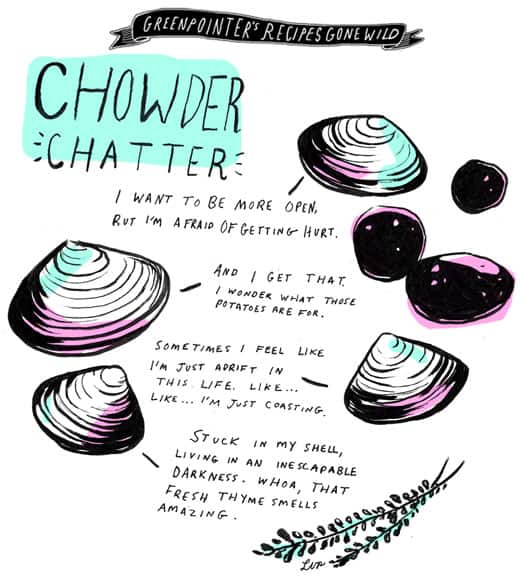 Clams have feelings too, you know…maybe? Disturb them and they’re liable to spit right in your eye. Such an action, so uncouth, so impulsive, warrants a long vacation in the soup pot, if you get my drift. What I’m saying is Ahoy! It’s time to make chowdah. And I’m not talking about that silly Manhattan version that some people have to mention when the word “chowder” comes up.  You don’t live on that island across the river, do you? So why would you make a stew that bears its name? The choice is clear (actually the choice is opaque, but whatever). This week’s recipe, New Amsterdam Clam Chowder, will keep you pleasantly fortified, as you brave the cool and craggy Brooklyn coast line. It has all of the traditional New England version’s flavor, but less of the cream—using more broth and potatoes to attain that silky-smooth texture. And while your simmering, maybe you can make some of these too, for dunking.  Otherwise, a nice, hearty slice of Balthazar multigrain boule works perfectly as an accompaniment.

At a Glance: Clams make you STRONG, son. A 3-oz. serving (roughly 9 cooked clams) contains more iron than beef, at 24 mg, which is higher than the recommended daily allowance for the average male or female adult. They’re also a good source of phosphorus, potassium, zinc, copper, manganese and selenium.

Um, Fresh Seafood in Greenpoint? Yes! You can pick up a nice, relatively inexpensive bag of fresh clams at the McCarren Park Green Market. Just make sure you store them in a bowl of ice in the fridge until your ready to cook with them—ideally the same day you buy them.

Directions
1. Put the clams in a pot with 2 cups water. Cover, bring to a boil over medium-high heat, and cook for 5 minutes. Uncover and continue to cook until the clams open, about 5 more minutes (discard those that do not open). Place the clams in another bowl, but reserve the cooking liquid from the pot. Rinse out the pot to remove any sand or debris.
Now pour the liquid back into the pot through a paper towel-lined colander. Add the potatoes, cover and simmer until tender, about 15 minutes. Scoop out a third of the cooked potatoes, and set aside. Continue cooking the remaining potatoes, covered, for about 10 minutes, until softened. Pour this mixture into the blender and purée (keeping in mind that the broth is very hot!) until smooth. Return the puréed mixture to the pot.

3. While this is cooking, remove the clams from their shells and chop roughly. Add the clams and the cup of half-and-half to the soup pot. Remove from heat, cover and set aside to let the flavors marry, about 20 to 30 minutes. Discard the bay leaves. Season the soup with salt and pepper. Gently warm the soup on the stovetop, and serve.