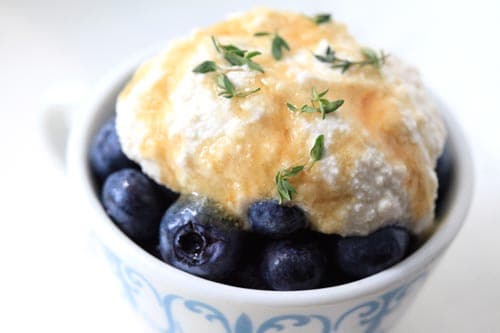 Sunday Supper #7 was particularly more stressful because I was the chef and I suffer from Food Anxiety – which is a clinical neurological condition that involves worrying about making enough food for your guests. One of the symptoms is making way too much food! Everyone in my entire crazy family has this problem – it’s a genetic mutation on the Sicilian strand of DNA I inherited from my father Rocco.

For this supper I also wanted to go vegan, partially because many readers had requested a vegan supper and also because I really love animals. Also Sicilian food translates really well into vegetarian and vegan because there isn’t much you have to do – a lot of it is already animal-free. 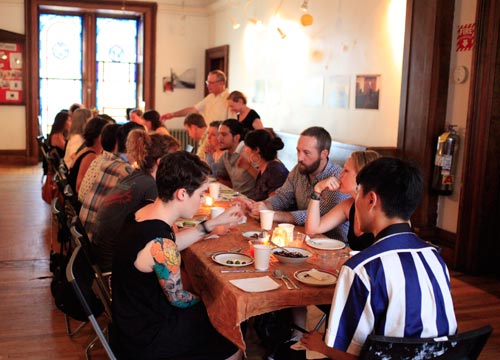 This supper was really special because it was at Greenpoint Church and proceeds benefited the Soup Kitchen. Also my Mom came (Rocco was in Sicily eating real Sicilian food) and my bestie Julie’s parents, who are so supportive of the website, also came.

I decided to share some of my favorite foods, like fava beans, fennel and red tomato sauce. And I tested out a new recipe: cashew ricotta, which I still want to blind taste test on my dad.

How do you know your Italian? When you shop at two different places called Valentino’s!

Cooking for over 25 people was a two day affair and a lot of work. I seriously wonder how people work in restaurants everyday! I did most of the prep the day before so when I arrived at the church the only thing I needed to do was heat the sauce and boil 8lbs of pasta! Good thing they have gigantic pots big enough for me to take a bath in.

Plating and serving that many dishes at the same time is also pretty hectic, but if you have great help, it’s not so bad. Thanks Jon, Martin & Santina! 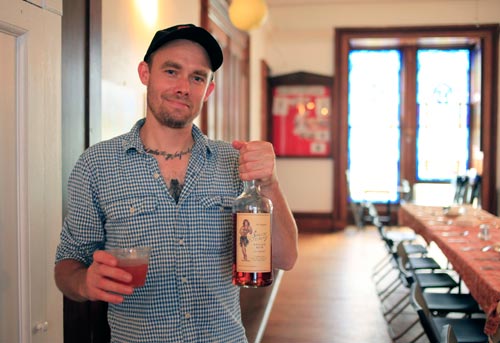 Jon, boyfriend of the blog, who owns the official pick-up truck of the blog, is also official blog bartender and made a delicious cocktails using generously donated Sailor Jerry’s rum, along with blood orange juice, lime juice, bitters and a splash of Campari. Testing those cocktails at home in the morning helped take the edge off. 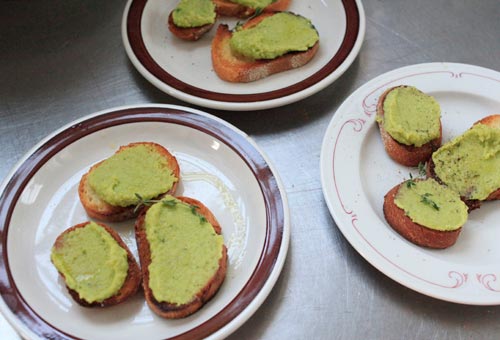 Fava Bruschetta was super easy and it strangely resembles Guacamole and tastes amazing on corn chips, too. I took a short cut. Instead of shelling thousand of fava beans twice, I bought some amazing frozen Egyptian fava beans, all ready to go, in the crazy Italian grocery store on Fresh Pond Road in Ridgewood called Valentino’s – not to be confused with Valentino’s on Metropolitan in Middle Village where I got the olives. (that one is on the way to Trader Joe’s – so stop in – they are so nice!)

Ridgewood Valentino’s is my Nonna’s favorite store, but wear ankle protection – old ladies are known to shoo you out of the way with their canes. And there is no concept of lines there – like in Sicily – so take some valium before you go. The price for produce there is cheaper than I’ve ever seen anywhere. I think they buy direct – so the prices are wholesale. We can fill a cart with eggplants and peppers and peaches and watermelons and it’s always under $25.

To make the fava bean paste boil the fava beans for at most 3 minutes in salted water. Remove and add them to a food processor along with good extra virgin olive oil, lemon, garlic cloves, fresh thyme salt and pepper. To make the toast, put Italian bread in the oven and when it’s hot smear it with a clove of fresh garlic. Spread the fava bean paste on top and finish it with a drizzle of olive oil and ground black pepper. Garnish with thyme. 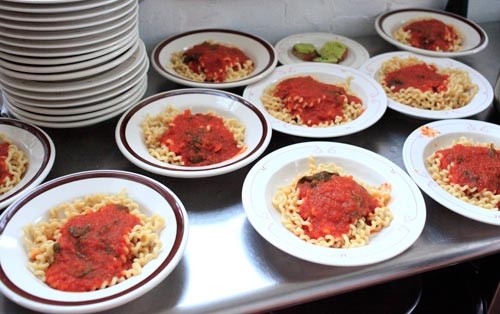 Red sauce is really easy. You just need a food mill. In a large pot sautee onions and garlic in olive oil. Add chopped fresh tomatoes. (Good canned tomatoes work, too.) Season with salt and let it go for an hour or two on low heat. Run the tomatoes through a food mill into a medium pot – add a little sugar, more salt and some fresh basil. Simmer until thickened. You can also add some fresh garlic cloves at this stage, too. Serve over pasta that you boiled with lots of salt! Top with Sicilian Eggplant – which are light purple and round. I have seen them for sale at Brooklyn Kitchen and the McCarren Park Greenmarket. 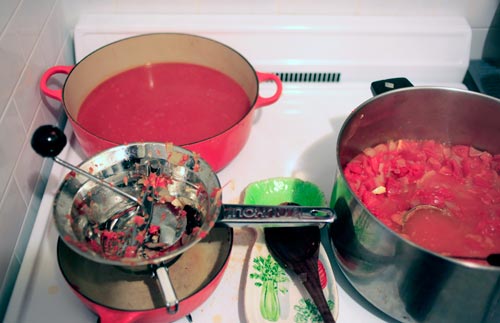 Some tips on frying the eggplants, slice and soak them in salted water first. My Mom and Grandma both do this – they say to remove the bitterness. Fry them in a mix of corn and olive oil. They will be greasy, which is why they are so delicious. 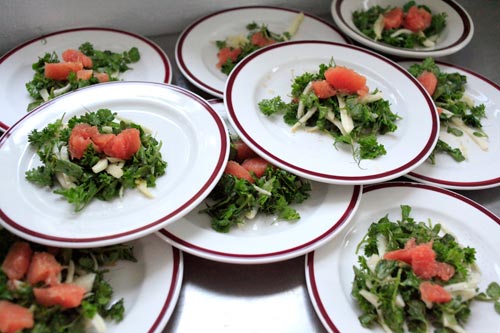 For the salad, which traditionally is a meal ender in my family, I used fennel, watercress, fresh parsley, grapefruit and a dressing made of shallots, lemon, olive oil and fresh thyme, plus salt and pepper – processed with an immersion blender so it was really creamy. 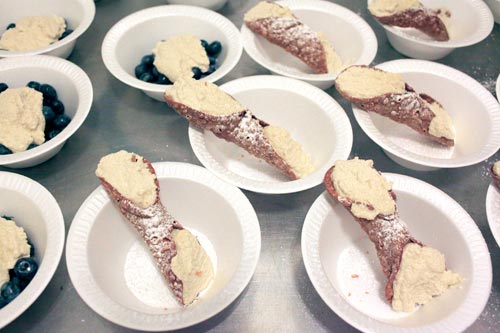 I promised Cannolis with Sweet Cashew Ricotta Cream filling before I realized that the shells have eggs in them – so I created two dessert options: the cashew ricotta cream over fresh local blueberries or inside of non-vegan shells. Over 20 guests put their veganism on the side and opted for this traditional Sicilian treat (normally made with sheep milk ricotta) and by nuns in the medieval mountains of Sicily!

Sweet or Savory Cashew Ricotta is the easiest thing to make. I got tips from Paulie Gee who uses it on his vegan pizza. What is great is that it’s not trying to be like cheese, it’s totally it’s own thing.

Soak a pound of cashews in water overnight or at least a few hours. In a food processor mix the soaked cashews with about a half a cup of water, some lemon juice, sugar, a little salt, vanilla and grated orange rind.

Served over blueberries, it is the most delicious and addictive vegan treat.