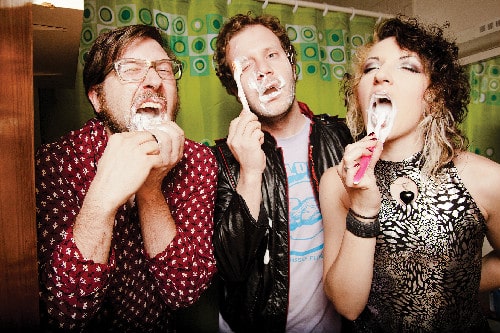 Lo-fi dance-pop darlings UNICYCLE LOVES YOU kicks off our new weekly Spotify playlist, curated by talented musician folk around GPT. Give ‘er a listen after the jump!

After seven years functioning and three albums released in Chicago, we moved to Greenpoint in late 2012. As a seasoned band, the transition has been kind of awkward and hence totally inspirational. So we dove head first into writing and recording our fourth album which we hope to release summer of 2014. This is a playlist of influences we’ve been embracing recently. Some have been in our subconscious for decades, and some we just think completely nail it. We’ll be giving away free copies of our latest album to all attendees of our next show at The Rock Shop on Saturday August 24.

Are you a Greenpoint-based musician? Then submit for a chance for us to feature your music and impeccable taste.

Beca is fueled by shoegaze and vodka. She regularly contributes to Paste Magazine, VICE, Brooklyn Magazine and others. If you see her on the streets of Greenpoint, hand her anything with guacamole and she might kiss you on the mouth.
View all posts by Beca →