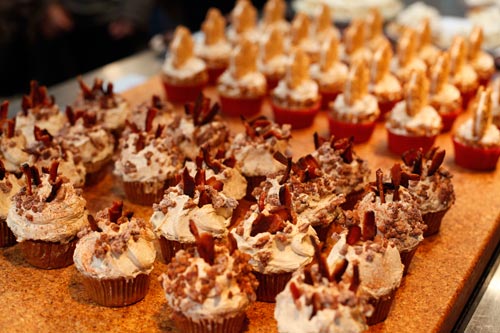 I was honored to be asked to judge a Cupcake Bake-Off fundraiser for NAG a few weeks back and I actually delayed my vacation a day in order to attend.  Cupcakes in mass quantity totally beat vacations. It’s instant brain happiness.

This is the second major “celebrity” judge opportunity I’ve had – the last one was the Halloween Dog Parade Costume Contest. I admit it’s starting to get to my head. The other judges were Ovenly’s head baker Hannah Duke, Carmen Rodriguez of Brooklyn Cupcake, and Councilmember Diana Reyna.

The Cupcake Bake-Off was held in The Brooklyn Kitchen’s awesome event space and as the contestants filed in with their goodies, I was drooling. The colors, shapes, sizes – cupcake overload! 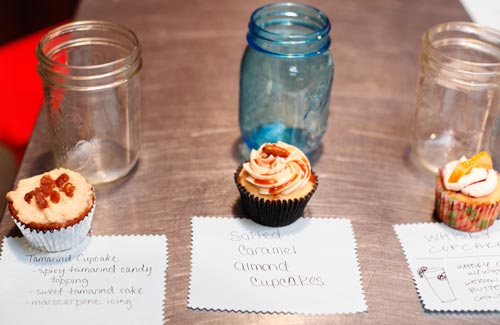 Trying over 20 cupcakes requires a game plan. While the other judges appeared to be doing a lot of thinking and note taking, I was shoving cupcakes into my mouth indiscriminately and washing them down with Brooklyn Brewery beer.

I had two available hands – they would both be used as alternating cupcake/beer mouth shovels.

When we convened to go over our “notes,” it was clear that we all had very different favorites. So we each decided to taste our top picks and then decide on a winner. The winning categories were: Best Overall, Most Inventive (replaced Best Vegan since there were no Vegan submissions), Best Savory, Best Presentation and the audience voted for Crowd Favorite.

It was interesting to discuss things that I really didn’t think of while tasting. Obviously Hannah and Carmen, who make cupcakes for a living, put major thought into their decisions. They mulled over the sweetness of the butter cream, the moisture of the cake, the flavor combinations, the savory and sweetness. Even Diana, politician by day, had the ability to pause during the engorging process and think about each cupcake.

I definitely bypassed the thinking process. When those cupcakes hit my tongue, there was an automatic: meh or LOVE!!! And the love sounded like a crazy dinging bell in my head. The cupcake with the loudest most intense and psychotic ringing was my winner. And after the final taste test – my winner was agreed on as the Best Overall.

Before I tell you who won Best In Show, let’s talk about the other prizes. 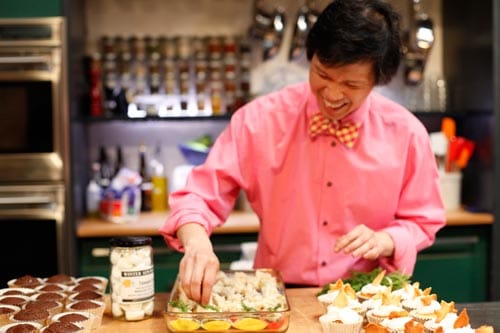 Best Savory was the only savory cupcake, a Swedish Meatball Cupcake Surprise. I questioned whether this cupcake actually was a cupcake, since it was a meatball, but it was cleverly disguised to look like a cupcake and actually was a great relief to have some salty meaty to balance out all the sweet.

Most Inventive Cupcake went to the Tamarind Cupcake (shown above). I know! Who would have thought of that? And it was delicious, a little tart just how you would expect tamarind to be and sweet enough to make it a treat but not to overpower that distinct tamarind flavor that really translated well into cupcake form. Carmen from Brooklyn Cupcake loved how the tamarind, an ingredient she has had some difficulty experimenting with, was a success.

Best Presentation went to the Maple Bacon Cupcake (shown above), which tasted exactly how you might imagine: a pancake breakfast when the maple syrups runs onto the bacon. It was the cupcake we all agreed called out loudly by way of its lovely candied bacon top – screaming EAT ME! 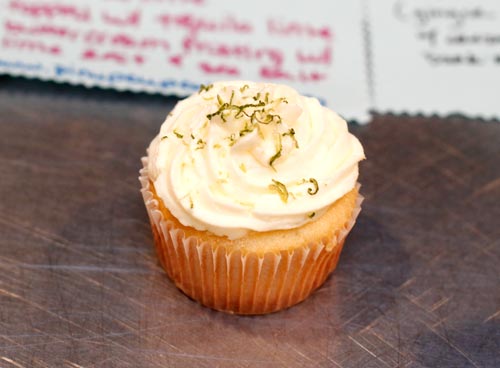 The judges were delighted to see that Crowd Favorite went to the Margarita Cupcake. While this was one of the judges strongest contenders because it was so unbelievably margarita-like with a nice salty sprinkle on top – it was criticized because the cake was slightly overcooked. Hannah said that, “if she just would have taken this one out 4 minutes sooner, it would have been perfect.” 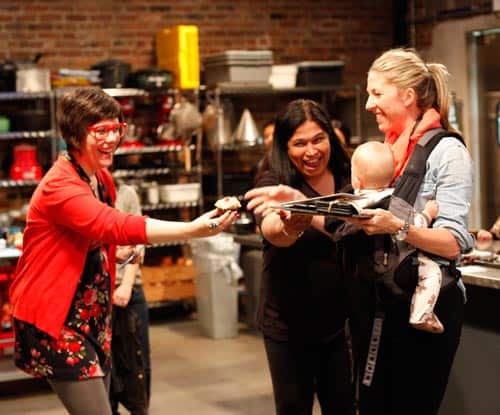 Figuring out the Best Overall among four women with very different tastes was not easy. The winner we came up with was not necessarily super inventive or incredibly gorgeous, but it was perfect no less. The Elvis Cupcake took the (cup)cake. It was a chocolate banana peanut butter cupcake topped with a piece of bacon – truly a crowd pleaser, baked to perfection, perfectly creamy – not too sweet icing.

This cupcake made the LOVE ring explode in my brain, and after thoughtful deliberation by experts, I’m happy that my cupcake winner alarm works!

After all this, let’s remember why we were all there. Yes, to stuff our faces with cupcakes, but to more importantly support NAG. Check out NAG’s Williamsburg Walks the next two weekends on Bedford Ave in June. (6/15-16 & 6/22-23).