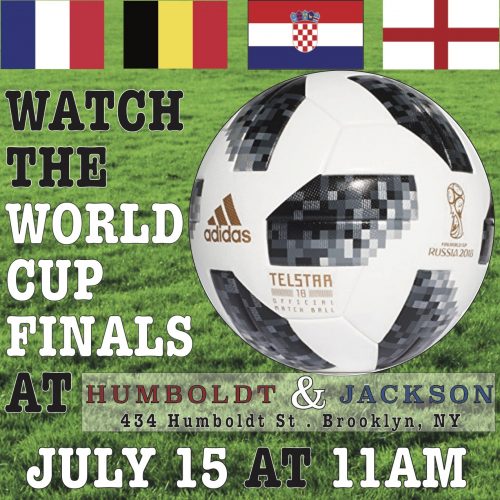 The madness is coming to an end. The World Cup finals are this weekend, and you can watch France vs. Croatia on the big screen at Humboldt & Jackson (434 Humboldt Street). The game kicks off (literally) at 11am, and the cozy American bar/restaurant will be showing it on their massive screen in the back room, for FREE. Expect cold AC, cold beer and warm and tasty burgers. If you want to bring a huge crew, you can email them for reservations ([email protected]).

Here’s some more of our favorite spots in the neighborhood to watch the big game.

KEG & LANTERN | 97 Nassau Ave
Keg and Lantern on Nassau Avenue has a great vibe. They have many screens and a great selection of beer and snacks. The only problem is that the place might be packed for some of the bigger matches. END_OF_DOCUMENT_TOKEN_TO_BE_REPLACED 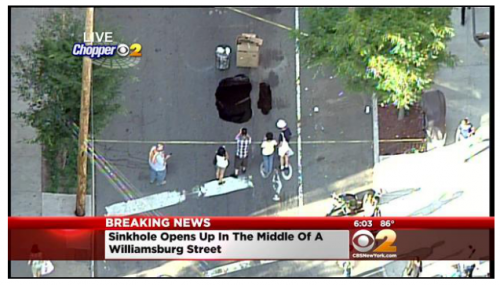 The New York Post says that “hipsters” are “hijacking” Brooklyn juries because they are well-educated and confident (serious over generalization??). They’re calling it the “Williamsburg Effect,” which leads juries to rule against defendants, and place more trust on police.  END_OF_DOCUMENT_TOKEN_TO_BE_REPLACED 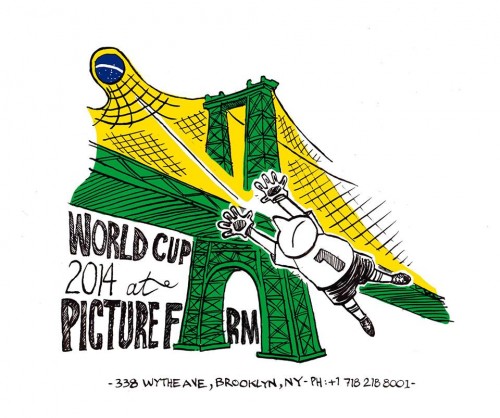 Every four years, Williamsburg & Greenpoint come alive in microcosmic fashion. Its residents, from all over the planet, ritually watching and enjoying, arguing and dancing, crying and screaming, for one very intense hot-summer month, consuming every single game of the World Cup.

If you’re still in search of a perfect spot to watch the battle in action, we have just the place. Picture Farm is showing every single game for the entire month. Hand-painted flags of all 32 countries already line the gallery walls, which will also be home to an inetractive wood team bracket, to measure the race to the goal.

So come one, come all! Rsvp here and check the official 2014 World Cup schedule for viewing times.

If you can’t make it to Brazil to find out then t.b.d. (224 Franklin St) is your best bet for watching all the World Cup madness. Soccer’s premiere international competition is just two days away and t.b.d. is your spot for every bit of world-class play. Plus they have some sweet drink deals! END_OF_DOCUMENT_TOKEN_TO_BE_REPLACED