How You Can Learn About Homeowner’s Rights (12/10) 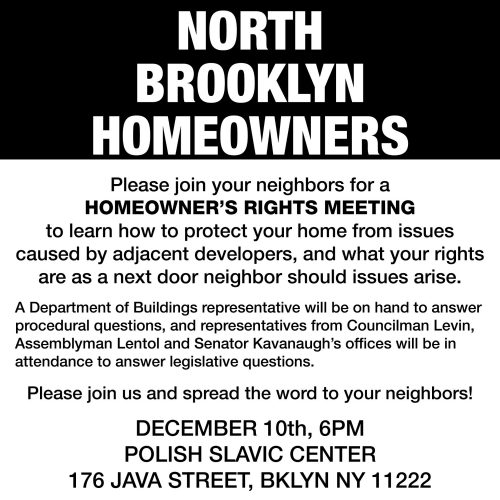 North Brooklyn neighborhoods have experienced redevelopment over the past decade with demolitions and new construction a common sight. Living directly next to an active construction site can also be a headache, to say the least, and when serious issues arise that may require legal action homeowners can be flummoxed when considering which steps to take.

To help educate the public, a North Brooklyn homeowners’ rights meeting is taking place on Monday, Dec. 10, at the Polish Slavic Center (176 Java St.) at 6 p.m., where reps from the Dept. of Buildings and the offices of Council Member Stephen Levin, State Senator Brian Kavanaugh and Assemblyman Joe Lentol will be in attendance to answer questions. Event organizer and Greenpoint resident Victoria Cambranes worked to put the meeting together over the past few months:

“The idea occurred to me back in October because I had been speaking to quite a few of my neighbors and I’ve been hearing stories for quite some time now about people experiencing cracks, and issues with foundations and getting into litigation with developers, and it seemed like people were only discussing these things once it was too late.

It also occurred to me that many of my neighbors, because they’re older, a lot of them purchased houses in Greenpoint in the 60s and 70s and they don’t really have the wherewithal to go and do their own research and educate themselves, that they were missing a lot of information that could help them prevent a lot of these issues.

I’ve been given a bit of an education just in the last couple of months with DOB procedures, and insurance policies, creating party wall agreements and essentially what your rights are as an adjacent homeowner. And this was all new to me so I’m sure it would be new to a lot more people…I also got involved with a homeowners group down in Crown Heights because I was alerted that State Senator Velmanette Montgomery and Assemblywoman Tremaine Wright were working on legislation to help protect homeowners, so I’ve been in contact with them and hoping that they could come to educate us in North Brooklyn a little bit about what their work has been and what kind of legislation they hope to pass.”

END_OF_DOCUMENT_TOKEN_TO_BE_REPLACED

Part of the reason for the Levin landslide was his success in getting the city to buy the land for Bushwick Inlet Park. In announcing the purchase of the land, Mayor De Blasio, an ally of Levin’s, spoke of Levin being a tireless gadfly in advocating for the purchase of the park. Levin was also instrumental in gaining more than seventeen million dollars in funding for the park.  END_OF_DOCUMENT_TOKEN_TO_BE_REPLACED

Powerful business interests have been flexing their muscles here in Greenpoint, too. Both the waterfront development firm Greenpoint Landing Associates, and the pharmaceutical conglomerate Pharmaceutical Research and Manufacturers of America (PhRMA) scored some good press this week by making grants to the local community. Greenpoint Landing Associates donated $250,000 to the Greenpoint YMCA (99 Meserole Ave) to renovate the gym, fitness room and spin center. PhRMA pledged $2,000 to P.S. 34 Oliver H. Perry Elementary to support the school’s science, technology, engineering and math (STEM) programs.  END_OF_DOCUMENT_TOKEN_TO_BE_REPLACED