Well, these past two years have been a long, strange trip. Whether our political climate has led you to become more active in our society’s affairs or make a difference in our local community, one thing is for certain: we all have many, many questions. So, no matter if you identify on the left, the right, or nowhere at all, some of us can’t help but wonder – what is life like on the other side? And, why do people make the choices they make? 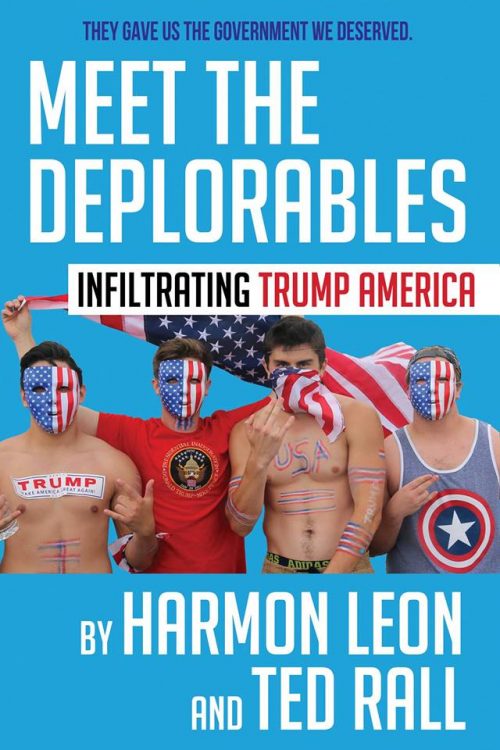 Enter: Meet the Deplorables: Infiltrating Trump America, a book by journalist Harmon Leon and political cartoonist, Ted Rall. The team joined forces to answer the burning question: “Just what the hell exactly happened in 2016 and how did we get here?” As the duo goes deep undercover and journeys into the human psyche, the book is insightful, honest, raw, and eye-opening. There’s humor and some surprises. Quite a few individuals sport real-time “Make America Great Again” tattoos (yes, really) to Ted’s own personal run-in with Trump pre-political run (and features the best boss in history).

So, tonight at Pete’s Candy Store (709 Lorimer Street), you can hear it straight from the sources: real-time stories about Trump’s America. From going undercover at anti-Muslim meetings (they sure do love cookies) to pretend-praying in tongues at an American Horror Story-esque Hell House, there’s big takes from these weird-but-true experiences:

END_OF_DOCUMENT_TOKEN_TO_BE_REPLACED

The Karcher is Supporting Trans Rights by Offering Non-Gendered Haircuts

Nackie Karcher and Madeline Jacobs, who are the Owner and Manager of local salon The Karcher (72 Greenpoint Avenue) have been talking about showing their support for women as well as the LGBTQ community for several months. “Since November and the election we’d been thinking about what can we do. We had pre-printed postcards for people to write their representatives sitting up at the desk for a while. We closed the day of the women’s march. And we’ve been thinking about ways we can use the space, for having community engagement. Being a queer-identified person myself… what can we do to make people feel accepted?” Madeline says.

Yesterday, the salon announced via its Instagram account that they would be offering Non-Gendered haircuts, stating, “We now offer a Non-Gendered Cut service option when booking on our website. We recognize that not everyone fits the commonly used gender binary service options and we want to make everyone feel welcome in our salon.” It was no coincidence that earlier in the day, President Trump tweeted, “After consultation with my Generals and military experts, please be advised that the United States Government will not accept or allow transgender individuals to serve in any capacity in the U.S. Military. Our military must be focused on decisive and overwhelming victory and cannot be burdened with the tremendous medical costs and disruption that transgender in the military would entail. Thank you.” On its Instagram post, the salon continued, “It’s a small action, but in light of today’s attack, we want to #resist how we can. You are welcome here. #transrightsarehumanrights”. END_OF_DOCUMENT_TOKEN_TO_BE_REPLACED

Greenpointer Withdrawing as Secretary of The Army Nominee

So, a local hero will not be serving in the Trump Administration after all. Vincent Viola, the billionaire owner of the Florida Panthers ice hockey team and St. Cecilia’s graduate, has decided not to pursue his nomination by President Donald Trump to serve as Secretary of the Army. It was widely reported by many American newspapers on Friday that Viola informed President Trump on Friday that he would be unable to accept the nomination because separating from the companies that he had built over the last 35 years had proven too difficult, according to the Chicago Tribune. Some reports say that Viola could not divest himself from his stake in Eastern Airlines, which he would have been required to do under conflict of interest laws cabinet members must abide by. The New York Times reported that Mr. Viola had been negotiating to swap his stake in Eastern Air Lines for a stake in Swift Air, an airline with government subcontracts. If his nomination had continued, he would have faced controversy by potentially becoming a government official who profited from federal contracts. Viola becomes the first nominee chosen by Trump to remove himself from the nomination process. END_OF_DOCUMENT_TOKEN_TO_BE_REPLACED

No, Bill Murray has not announced any further bartending engagements, but his son’s restaurant, 21 Greenpoint got some good press this week! END_OF_DOCUMENT_TOKEN_TO_BE_REPLACED