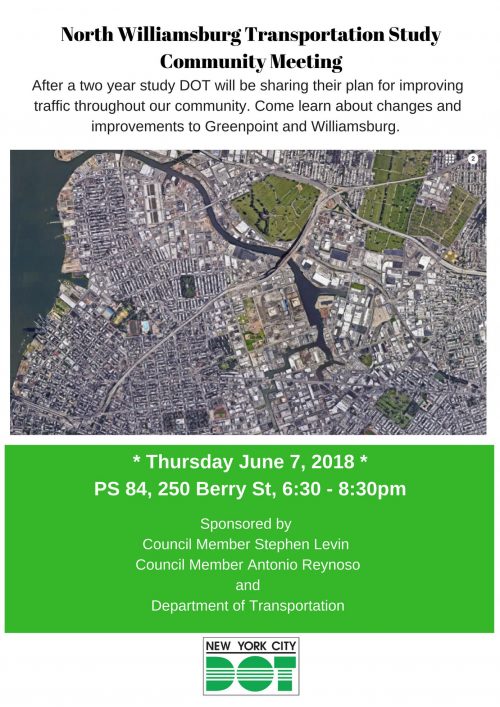 The new Kosciuszko Bridge finally opened yesterday to much fanfare (and of course, some traffic). If you’re passing by at night, or on a rooftop, you’ll be able to catch the rad light show, which was funded with the $500 million that the MTA chipped in for bridge overhauls. According to CBS New York, “The first of two new spans opened to drivers Thursday. It will carry traffic in both directions while the second span is built. The first span will be converted to five lanes of Queens-bound traffic when the second span containing four lanes opens in 2020 for Brooklyn-bound traffic. The bridge will also feature a 20-foot-wide path for cyclists and pedestrians.”

The old sections of the bridge will be imploded this summer, and there’s currently a petition to have a live orchestra play the 1812 Overture as the bridge literally bites the dust. More than 14,000 people have RSVP’d to the bridge blow-up on Facebook, with another 56,000 people “interested” in the event. And PS—if you’re wondering how to pronounce Kosciuszko, here’s a video primer with a little history mixed in.

Yesterday, photographer Nick McManus was able to ride over the bridge before it opened to traffic and captured some cool instant photos. See more after the jump.

END_OF_DOCUMENT_TOKEN_TO_BE_REPLACED

If you’ve noticed a treacherous traffic signal or wished for the addition of a particular crosswalk on the streets of Greenpoint or North Williamsburg, now’s your chance to speak up. In the ongoing North Williamsburg Transportation Study, the New York City Department of Transportation (DOT) is surveying the portion of Brooklyn Community District #1 that stretches north of Broadway and Flushing Avenue between Newtown Creek and the East River to boost both safety and convenience for commuters. The initiative is a response to complaints and transportation hitches as the hot neighborhood grows increasingly crowded with architectural developments and thronged with both inhabitants and visitors.

END_OF_DOCUMENT_TOKEN_TO_BE_REPLACED

As Greenpointers reported in November, Citi Bike announced plans to bring the popular bike sharing program to the outer boroughs of Brooklyn and Queens. The expansion plans included adding 6,000 bikes and 375 new docking stations to locations by the end of 2017. Lucky for us and the nearby nabes of Williamsburg, Long Island City and Bedford-Styvesant, we’ll be getting 1,000 of those blue babies this year. END_OF_DOCUMENT_TOKEN_TO_BE_REPLACED

This wasn’t an isolated incident. In 2010, a 28-year-old was the victim of a hit-and-run and later taken off life support after days of being unresponsive due to serious brain injuries.  In 2009, a 33-year-old British woman was struck and killed by a flatbed truck where Nassau meets McGuiness. And the list goes on. END_OF_DOCUMENT_TOKEN_TO_BE_REPLACED

Yesterday at 4pm (3/9) Jorge Rios, 47, was riding his motorcycle northbound on Manahattan Ave when he hit a car near Green Street. He passed away at Bellevue shortly after.  The driver of the vehicle is not expected to face charges, according to the Daily News.  Rios was from Queens.

This accident happened only two blocks away from the site of another fatal motorcycle crash that happened last August. The victim was 18.

This only heightens the need for safer driving/traffic regulations in Greenpoint, especially after we were already identified (with Williamsburg) as the site of the most traffic-related deaths in 2013. END_OF_DOCUMENT_TOKEN_TO_BE_REPLACED

Transportation Alternatives is advocating for increased awareness from drivers to cut down on accidents on dangerous intersections, like McGuinness and Nassau by lowering speed limits to 20 mph (which statistically lessens the likelihood of pedestrian fatalities).  Here’s to hoping. END_OF_DOCUMENT_TOKEN_TO_BE_REPLACED

The owners of Battery Harris were actually tipped off to the DOT’s Pedestrian Plaza Program by the community board itself, and had nothing but praise for the city agency that not so long ago was referred to by many as “the department of No” for their conservative attitude towards innovation in street design.  END_OF_DOCUMENT_TOKEN_TO_BE_REPLACED