The second town hall this year on petroleum vapors in Greenpoint will take place on Wednesday.

The North Brooklyn Neighbors are hosting the town hall on “persistent petroleum odors in Greenpoint homes and on the streets” on Wednesday (6/12) at the Polish and Slavic Civic Center (176 Java St.) at 6:30 p.m.

A post shared by North Brooklyn Neighbors (@northbrooklynneighbors) on Jun 6, 2019 at 7:46am PDT

At the previous petroleum vapor town hall in May, DEC reps explained how they are testing the air quality in homes where vapors are reported and that DEP has been actively flushing and testing the sewer lines for petroleum vapors near Huron Street and Manhattan Avenue.

END_OF_DOCUMENT_TOKEN_TO_BE_REPLACED

Gas odors resulted in the temporary evacuation of preschool children from the Greenpoint YMCA’s Early Childhood Center in the Polish and Slavic Center at 176 Java St. on Thursday morning, according to a parent whose child was evacuated.

The YMCA Early Childhood Program director Linda Leahy alerted parents around 9 a.m. this morning that gas odors were detected on the third floor of the building, according to the Greenpoint parent.

A teacher at the preschool said that the smell was from a potential gas leak and that the odor was strong enough for the children to be evacuated to the Greenpoint YMCA at 99 Meserole Ave. in the rain.

FDNY arrived at 176 Java St and determined the building to be safe; school staff and children returned to the building around noon today.

Separately, a rash of reported gas vapors seeping into residential buildings centered around Huron and Freeman Streets lead to a community meeting in Greenpoint earlier this month with the State Dept. of Environmental Conservation, North Brooklyn Neighbors and local elected reps.

END_OF_DOCUMENT_TOKEN_TO_BE_REPLACED

Greenpoint Soil Safety Workshop Teaches How to Test for Lead

As a result of Greenpoint’s rich industrial and manufacturing history, significant contamination of the local soil with toxins such as lead remains a problem.

A soil safety workshop from the Greenpoint Community Environmental Fund will help you learn “what lead (and other contaminants) in soils – and their soil test results – mean” on Saturday, April 20th, at Kingsland Wildflowers (520 Kingsland Ave.) from 9 a.m. to 12 p.m.

Experts on soil contaminants will answer your questions and help interpret soil test results; a 40-pound bag of compost will be available to take home for free.

If you prefer to lament, or compliment, the cleanup plan in the company of your neighbors, then you’re in luck: North Brooklyn Neighbors and NYC Council Member Stephen Levin are hosting a comment-athon this Wed. Oct. 24, from 6 p.m. to 8 p.m. at Threes Brewing (113 Franklin St.). END_OF_DOCUMENT_TOKEN_TO_BE_REPLACED

Today is your chance to learn about the toxins lurking underneath the area surrounding our beloved McGolrick Park.

The New York State Dept. of Environmental Conservation (DEC) is holding a public meeting to answer your questions about the Meeker Avenue Plume. State reps will be on hand to talk about the ongoing investigation at the site outlined in black on the map above.

END_OF_DOCUMENT_TOKEN_TO_BE_REPLACED

At press time, the scaffolding lacked visible street-level permits and extends far beyond Lot 57 to include adjacent Lot 17. This is the latest in a series of well-documented missteps by the Dupont Street Developers and their rotating cast of contractors. END_OF_DOCUMENT_TOKEN_TO_BE_REPLACED 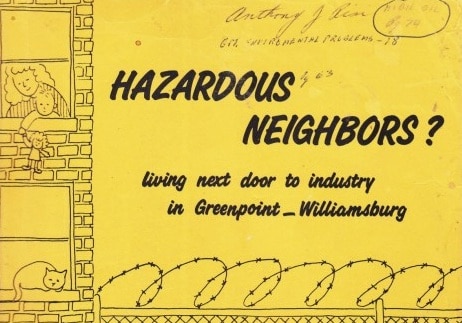 It reveals the former locations and quantities of reactive chemicals — the kind that explode when they make contact with water, such as cyanide. In many cases, they’re shockingly close to residential buildings in Brooklyn’s priciest real estate drag. From speaking with a NAG member at the map release event, I also found that the “Hazardous Neighbors” study contains information that’s not available in the ToxiCity Map. END_OF_DOCUMENT_TOKEN_TO_BE_REPLACED

To shine a light on Brooklyn’s murky legacy of contamination, the Neighbors Allied For Good Growth (NAG) and Pratt’s Spatial Analysis and Visualization Initiative ( SAVI) released a beta version of a ToxiCity Map revealing the underground toxins of Greenpoint and Williamsburg. The map release event was held at the Sunview Luncheonette in Greenpoint last Tuesday, but in case you couldn’t make it, here’s a re-cap.

To get right to the point, the most significant contamination hotspots persist around Franklin and Dupont Streets (across from where Greenpoint Landing is going up) and McGolrick Park (which is host to stubborn dry cleaning plumes). There’s also the still-functioning and unsettling Radiac storage facility (cough…VICE employees may want to look into this), keeping things radioactive on Kent Avenue around the corner from PS 84. END_OF_DOCUMENT_TOKEN_TO_BE_REPLACED