Music, party and performance art collective Rinsed debuted their latest theatre project Under The Influencer last week in Bushwick, after more than a year of ideation, planning, writing and recording an original score, building out a unique set, script writing, revisions and rehearsals. The show is immersive, but not in the same way as Sleep No More or Then She Fell—it’s more lo-fi than that, and the audience doesn’t interact one-on-one with the performers. But, what Rinsed has produced this time around is an extremely engaging ravey rockout, and straight up funny.
END_OF_DOCUMENT_TOKEN_TO_BE_REPLACED 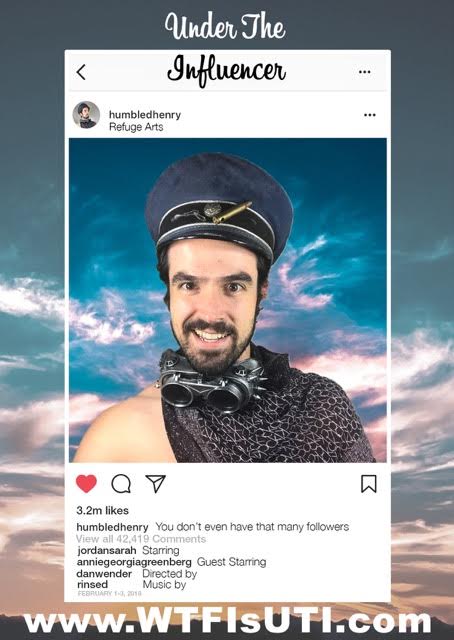 This week from February 2-3, party collective and record label Rinsed/The Umbrella are presenting their latest immersive show and music video experience, which examines the internet’s most tortured souls—social media influencers—at a secret North Brooklyn location. The satirical performance titled Under The Influencer uses a 360º hexagonal stage with surround sound pumping an original electronic score. The custom stage is set up so that the audience will constantly rotate to experience different vignettes around them. Three video screens will be playing music videos, and three stages will show live action interludes to tell the narrative. Each night there are two shows, one at 8pm and the other at 10pm.

Tickets are $15, and we are giving away a FREE pair of tickets to a show at whichever day and time you choose! To enter, visit our Facebook page via the form below and enter your email. Winners will be notified at the end of the day on Wednesday January 31st, and receive location info.

END_OF_DOCUMENT_TOKEN_TO_BE_REPLACED

Vital Joint’s venue is tiny, but the amount of pre-show audience chitchat was enormous. Most was facilitated by a a suit-donning and larger-than-life Rhinelander (more on him later), but some was organic: “Did you make that necklace” or “Hey, the bar serves beer” pleasantries were also exchanged. If there was ever a lull, our German friend was quick to fill it with a quip or suggestion that the cash-only bar is steps away. “This is experimental theater,” he said. “You’ll need a drink.”

This is all the prelude to Dandy Be Good, queer artist GJ’s storytelling cabaret now playing through January 27 at Vital Joint (109 Meserole Street) as part of Brooklyn’s Exponential Festival. Like the pre-show banter, Garlan Jude (GJ)’s show fosters community and togetherness. They lip sync to songs from Judy Garland (a fun reversal on the performer’s name?) and interviews from socialite women of yore. But GJ doesn’t hog the stage — they share it with a trio of guest performers: a vaudevillian-reminiscent actress, a consummate orator, and — yes — our chatty German pal.

END_OF_DOCUMENT_TOKEN_TO_BE_REPLACED

Experimental Indie Theatre in North Brooklyn at The Exponential Festival This Weekend!

The Exponential Festival is back again this January 2018, bringing a diverse collection of experimental and indie theatre, performance, dance and art to North Brooklyn and beyond. The last two weeks of the fest are happening right now, with these unique performances happening right here in our ‘hood this weekend and next week at varying times. We’ve listed all the remaining local performances below, and you can check out the rest of the fest’s calendar here.

VITAL JOINT | 109 Meserole Street
Dandy Be Good, Jan 17-20, 24-27 @ 8pm, RSVP to [email protected] — Dandy Be Good is a site specific interactive performance and a sexy, queer, underground cabaret! Dynamic host GJ is teaming up with a marvelous array of performers to bring you a fantastic bouquet of storytelling. END_OF_DOCUMENT_TOKEN_TO_BE_REPLACED

The richest musical score this season might not be found on Broadway. To add to its allure, it’s created by a “migraine-suffering musician who talks to dead people.”

It’s a bold self-proclamation, but Obie Award winner Heather Christian’s Animal Wisdom is an equally bold work — and one that’s near impossible to pin down. To call it a play lumps it in with traditional narratives, and yet to label it a folksy-Requiem-mass-drama barely trumpets its dynamism, élan, and pure resplendence.

END_OF_DOCUMENT_TOKEN_TO_BE_REPLACED

“The chair recognizes Joan of Arc.”

It’s hard not to recognize her, in the theatrical sense — like the Joans we’ve seen, this one’s armor-clad, cross-bearing, and all-powerful. But is this Joan? Well, of course not; it’s merely a depiction.

But is the performer (a marvelously focused Bre Northrup) playing Joan, or a character who believes they are Joan? This is one of the central questions in Arthur Kopit’s Chamber Music, now playing through September 16 in the basement of St. John’s Lutheran Church (155 Milton Street).

Director Emily Moler makes dynamic use of her staging Kopit’s absurdist play, setting it in the round and utilizing the subterranean locale’s low-budget though ample space. In fact a church basement may be the unlikely, appropriate setting for Chamber Music: the play actually takes place in a mental institution, so a church (with its rigid mores) lends itself winningly to this story’s strict asylum. The “Joan of Arc” and other lady icons, from Osa Johnson to Pearl White, inhabit this jail, and their meeting of the minds feels echoed in the opening of Top Girls, Caryl Churchill’s feminist anthem. END_OF_DOCUMENT_TOKEN_TO_BE_REPLACED

When Will Malitek, the owner of Film Noir Cinema (122 Meserole Ave), turned an old Greenpoint funeral home into his gorgeous new 54-seat movie theater, he remodeled with very specific plans in mind. There’s a sizeable gap between the screen and the first row, where Will says he could have added more seats, but he wanted space to present live music. 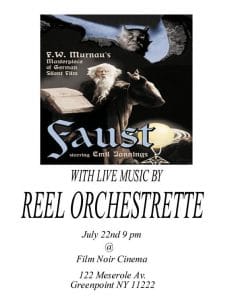 After a sold-out screening of Nosferatu in June, Reel Orchestrette is returning to Film Noir Cinema on Saturday, July 22 at 9pm with a live score for Faust, a 1926 German silent film directed by F. W. Murnau.

These two events are only the beginning. Malitek hopes to continue the series with screenings of all the major German silent films: Metropolis, Waxworks, The Cabinet of Dr. Caligari and more. And in October, he says we can expect to see a full lineup of silent horror films.

Tickets for Faust are $15 and on sale now at Film Noir Cinema (where you should also take a moment to flip through their incredible collection of films available to rent).

To find out more about the performance, we spoke with Reel Orchestrette’s Bradford Reed and Geoff Gersh. END_OF_DOCUMENT_TOKEN_TO_BE_REPLACED

LoftOpera never shies away from its edgy adaptations. In its upcoming production of Rossini’s Otello—based on Shakespeare’s tragedy of the same name—the challenge lies not in an overt modernization but in the score’s groundbreaking and complex music, and in the fact that this opera has not been produced in New York in more than 40 years. Loft’s reimagining of the classic tale of otherizing and political upheaval—themes still grappled with today—will play at LightSpace Studios (1115 Flushing Avenue) from March 16–27. We had the chance to speak to four-time Loft director John de los Santos and conductor Sean Kelly, a specialist in the bel canto technique.

GP: How have rehearsals been going?

JdlS: It’s an incredibly challenging piece but I’m very lucky to have Sean, the cast, and the incredible musicians, so it’s been going well.

SK: No one has sung this opera before, so it’s new for everyone, which is exciting. The Otello (Bernard Holcomb) we’ve technically been working with since September/October to prepare musically for the role.

GP: Rossini’s Otello has not been seen in New York in decades. Why this piece now?

JdlS: The last piece Sean and I did for Loft was Rossini’s Le Comte Ory and we had a great success with that, so it’s great to be working on one of his tragedies. This piece was an evolvement for him in his music as he was trying out some new things and really trying to push his audiences to accept and deal with topics that were pretty controversial in this period. Everybody’s familiar with the Verdi version of Otello and this one’s 70 years older. I think this version is superior; there are several things he does better than Verdi. END_OF_DOCUMENT_TOKEN_TO_BE_REPLACED

When Freedom of Expression and Censorship Battled on Manhattan Avenue!

The other day, I gave a talk on the Irish history of Greenpoint, and a long-time Greenpointer offered me a new twist on a famous old Greenpoint legend.

Before diving into the story, lets get acquainted with the story’s protagonists. The legendary scandalista Eva Tanguay was a Vaudeville legend who came to perform at the B.F. Keith’s Theater at Manhattan Avenue and Calyer Street sometime around the turn of the century. Notorious as the “I Don’t Care Girl”—the title of her signature song—Tanguay established herself as the queen of Vaudeville in 1901 with the New York City premiere of her controversial show “My Lady.” The Lady Gaga of her day, Tanguay was brazen, impudent, and shameless in the eyes of the Prudish. Some of her hit songs like “It’s All Been Done Before But Not the Way I Do It” and “Go As Far As You Like” boldly suggested illicit pleasures. She wore a shockingly revealing dress made entirely of pennies and filled her act with racy double entendres. Greenpoint’s Mae West, who later became equally notorious, was an early admirer who later incorporated many elements of Tanguay’s act into her own suggestive performances. END_OF_DOCUMENT_TOKEN_TO_BE_REPLACED

“Nightcap Riot: Mombucha”: Culture and Live Cultures Make for One Heck of a Night Out

When “I can’t feel my face,” refers to the walk from the subway instead of Drake’s oeuvre, you know the deep freeze of mid-January has descended. It’s hard to find entertainment that justifies donning a puffy coat and wrapping up like a woolen burrito. But no one can Netflix and chill forever. If you’re like me and you’ve logged at least ten hours of couch time binging “Making a Murderer” this month, it’s time to get out of the house.

Luckily, a group of nightlife veterans are eliminating the guesswork and serving up the perfect night out, right here in Greenpoint. “Nightcap Riot: Mombucha” is one part concert, one part immersive theater, one part kombucha brewing tutorial, with a dash of comedy, and plenty of kombucha-infused cocktails. The resulting two and a half hours go down smoothly. It’s fresh, different and way more interesting than spending winter downing pints at the same old bar. END_OF_DOCUMENT_TOKEN_TO_BE_REPLACED