While local residents are not currently a risk for exposure at the moment while the toxins remain more than 10 feet underground, the cleanup process is supposed to start following the demolition of the building which could start later this year following approval of the proposal of the cleanup plan by the state. END_OF_DOCUMENT_TOKEN_TO_BE_REPLACED

The deadline is today (11/19) to submit feedback to the Dept. of Environmental Conservation on the proposed cleanup plan (PDF) of the Nuhart Plastics Superfund site.

Demolition is scheduled to start next year on the building which sits on highly toxic land at the corner of Franklin and Dupont Streets, where the groundwater and soil are contaminated with a host of human carcinogens, such as phthalates and TCE.

Comments can be sent to:

A letter with recommendations on the proposed cleanup plan addressed to the DEC from Environmental Stewardship Concepts, the technical advisor hired by the North Brooklyn Neighbors, addresses many issues including the need for pressurized tents during excavation to minimize the spread of harmful airborne volatile organic compounds. 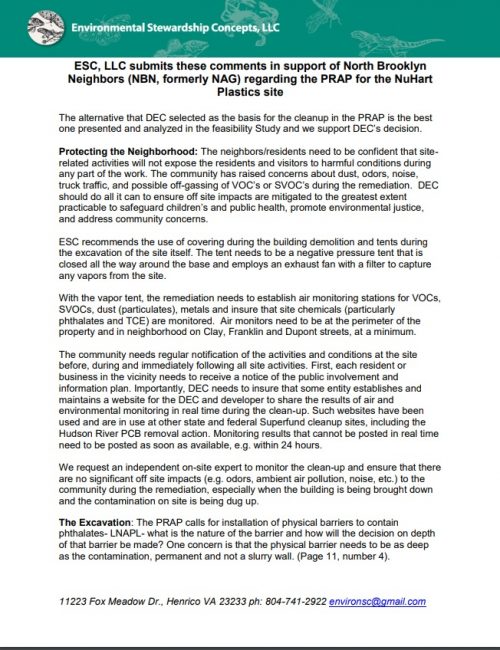 END_OF_DOCUMENT_TOKEN_TO_BE_REPLACED

If you prefer to lament, or compliment, the cleanup plan in the company of your neighbors, then you’re in luck: North Brooklyn Neighbors and NYC Council Member Stephen Levin are hosting a comment-athon this Wed. Oct. 24, from 6 p.m. to 8 p.m. at Threes Brewing (113 Franklin St.). END_OF_DOCUMENT_TOKEN_TO_BE_REPLACED

How to Submit Your Comments on Toxic Cleanup of NuHart Plastics

A two-month public comment period is now open for you to submit feedback on the proposed cleanup of the NuHart Plastics Superfund site, where two large plumes of phthalates and trichloroethylene (amongst a cauldron of other toxins) remain in the soil and groundwater at 280 Franklin Street from vinyl plastics manufatcuring dating back to the mid-20th century.

You can access and download the full report (PDF) from the Dept. of Environmental Conservation remediation database.

The operators of NuHart Plastics vacated the site in 2004 leaving behind toxins in 12 leaky underground storage tanks and two aboveground silos. Over the years the gooey liquid phthalates mixed with groundwater and migrated toward the Greenpoint Playground and the adjacent lot where a potential school is planned, conveniently stopping at the playground’s edge on Franklin St.

END_OF_DOCUMENT_TOKEN_TO_BE_REPLACED

Heads Up: Important Community Meeting on 10/4

FYI: Fellow residents and neighbors, there’s a majorly important community meeting happening this Thursday, October 4th. And, we think you need to know about it. You might even want to attend and take action.

The NYS DEC has finally released its proposed plan to clean up the NuHart toxic waste site in Greenpoint and they’re holding a meeting about said cleanup plan this Thursday. This is mega news. So, what’s the deal?Download the proposed plans here and scroll down to Former NuHart Plastic Manufacturing – 224136 for more info.

The cleanup plan for the Superfund site is  out for a 60-day public comment period. At this meeting, they’ll share the plan and your part is to give some sorely needed community input. Note: This is the only public meeting the DEC is holding for public input.

We’ll see you at the meeting, here are the need-to-know details:

Also, if you’d like to review the proposed cleanup plan in person, you can access the hard copy at these locations: 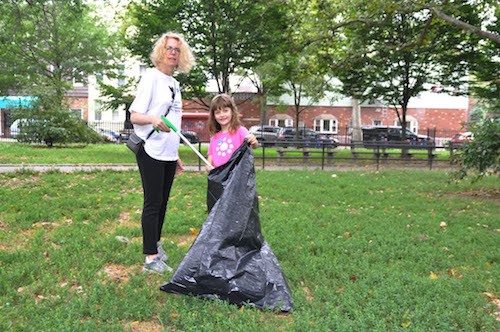 Located in the heart of Greenpoint is a park named for longtime neighborhood advocate Monsignor McGolrick, an Irish pastor who became a major community figure in the late 1800s. These days, the Greenpoint area has a new community leader. Her name is Konstancja Maleszyńska.

She works for the Open Space Alliance for North Brooklyn, a non-profit that partners with the New York City Department of Parks & Recreation to help “fill the gaps” that result from underfunding and understaffing within the city department. One of her current projects is organizing monthly “Saturday Sweeps” of McGolrick Park, where neighbors can come meet one another and work together to pick up litter. END_OF_DOCUMENT_TOKEN_TO_BE_REPLACED

At press time, the scaffolding lacked visible street-level permits and extends far beyond Lot 57 to include adjacent Lot 17. This is the latest in a series of well-documented missteps by the Dupont Street Developers and their rotating cast of contractors. END_OF_DOCUMENT_TOKEN_TO_BE_REPLACED