State Senator Julia Salazar is often described politically as being left of the center; she’s a Democratic Socialist and a self-identified “Marxist.”

It’s no wonder then that her challenger, Andy Marte, has painted himself a “realist” in his bid to unseat Salazar after her first term in office. Following months of bitter campaigning, including allegations of campaign finance abuse, Marte hopes to persuade moderate Democrats in the 18th District to replace a young, left-of-center incumbent with a young, close-to-center insurgent.

Greenpointers spoke with Marte before Tuesday’s democratic primary elections about his more restrained approach to police reform, his take on mass vaccination campaigns and his ideas for creating more jobs in North Brooklyn.

To voters who don’t know you, can you introduce yourself?

I was born and raised in New York and went to elementary school all the way through high school in Bushwick. I ended up at 14 years old stumbling into local Bushwick politics as an intern for the local Assembly Member, Vito Lopez. From there, when I graduated high school, I ended up at Georgetown University.

When I graduated from Georgetown, I started working on my teacher certification. I was a substitute teacher for some time. I worked at RiseBoro, which is a social services agency in Bushwick, doing affordable housing with them. I also some time after that was a consultant for a substance abuse program in the neighborhood that also works with HIV people. My father passed away from HIV when I was young, so that was something I was very passionate about.

Before I ran for office, I wanted to understand the three most important things to people, which were housing, healthcare and education.

Why are you running for State Senate?

I’m running for State Senate because the current State Senator that we have has zero experience in almost anything. There’s a leadership vacuum in our community, specifically with the State Senate seat. No one sees her at any meetings. It’s very easy to talk about philosophical and theoretical jargon, but not actually do anything concrete.

I have a sociology background, so I understand the importance of some of the social programs that we have. But I think when you take that to an extreme of supporting Marxism and supporting Vladimir Lenin, you’re adding a whole different aspect to your politics that is not beneficial to the people that I grew up with in North Brooklyn.

There have been daily protests throughout the city against the NYPD and police brutality. Do you believe in defunding the city police? If so, how much money would you slash from its budget?

I have not seen the police’s budget. I would love to take a look at it before we determine whether we should be removing money from them. We do live in the financial capital of the world, so we do need a police force that’s capable of protecting us.

As someone that has also studied politics in school and on the streets, there’s been African-American men that have been getting killed every year. There’s a presidential election and all of sudden the police are being attacked. It’s a very interesting dynamic. Some of that has to do with the influences of this Communist conversation that’s coming into our community. END_OF_DOCUMENT_TOKEN_TO_BE_REPLACED

Heading into this year’s June 23rd primary, Salazar is the incumbent, mired in what’s been an acrimonious race between her and Bushwick local, Andy Marte. Both have slung allegations of campaign finance abuse at each other, and Salazar has criticized Marte for sponsoring COVID-19 antibody testing at a NYCHA development without approval from the city.

Greenpointers spoke with Senator Salazar to hear her thoughts on occupying the unfamiliar role of incumbent, the push to remedy housing insecurity in Salazar’s district and her position on police reform city and statewide.

To voters who don’t know you, can you introduce yourself and explain why you’re running for State Senate?

I am the current State Senator for the 18th district. I was first elected in 2018 and I became the youngest woman in the history of New York State to be elected to the State Senate.

How does it feel to be an incumbent when the narrative of your campaign two years ago was one of insurgency?

Because we changed the election date in order to synchronize the state primary with the presidential primary, it’s actually been less than two years since the last election. It’s been an abbreviated period. That makes it particularly strange to already be running again for State Senate.

I am a Democratic Socialist. I am on the left of the Democratic conference in the State Senate. I am still committed to pushing for the most progressive policies and pushing for transformative change and challenging the status quo. In all those ways, I still feel like an insurgent candidate, despite being an incumbent.

It’s such a joy and an honor to have your support, @aoc! 🥰 The average grassroots donation to our campaign is $11.47, but if you can chip in anything, every dollar counts in this final stretch of the race! 🔗 Link in bio to join the thousands of people who have donated to my re-election campaign. . . . [Alt text: a lavender background with a gray, black, and red banner at the top reading “Alexandria Ocasio-Cortez endorses Julia Salazar,” with photos of Alexandria Ocasio-Cortez and Julia Salazar in the foreground.] #AOC #JuliaSalazar #alexandriaocasiocortez #nyc #NewYork #election2020 #election #democraticsocialism #socialism #socialismo #nuevayork

There have been daily protests throughout the city against the NYPD and police brutality. Do you believe in defunding the city police?

I believe that currently the NYPD’s budget and that of many police departments across the country are inflated. We need to be thinking critically about how much public funds are given to law enforcement and then how those funds are being used.

We’ve seen in recent weeks the militarization of police departments, including the NYPD, the brutal tactics used to suppress protests, including nonviolent protests. I would fully support decreasing the NYPD budget and then using those funds in the city budget for education, for example, to hire more counselors, to reduce the number of police officers, especially in schools that predominantly have a black and brown student body.

As far as quantifying it, I’ve heard from several Council Members, a lot of them are saying a minimum of a $1 billion reduction in the budget. I fully support that. Some of them are discussing more significant cuts depending on the details. I think at minimum the city needs to reduce the NYPD budget by at least $1 billion and then transfer that accordingly to more community alternatives.

At the state level, would you push for legislation to defund the state police and state law enforcement?

We haven’t been having rigorous conversations about this at the state level, mainly because of the way police departments are generally funded, but I would be very keen to examine what state resources are currently being allocated to law enforcement. I also want to ensure that any state or municipal resources that are currently given to law enforcement are not being used to collaborate with federal immigration enforcement.  END_OF_DOCUMENT_TOKEN_TO_BE_REPLACED

Childs’ difficulty in enrolling her son in a nearby public school reflects a growing problem in Greenpoint. Despite statistics from the Department of Education (DOE) that depict a large swath of northern Brooklyn as under capacity, Greenpoint’s Pre-K and elementary schools are filled to the brim, parents and elected officials say. END_OF_DOCUMENT_TOKEN_TO_BE_REPLACED 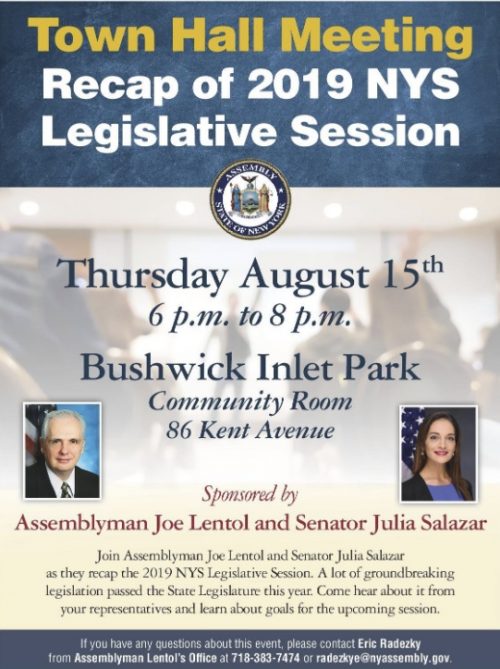 A town hall hosted by state Senator Julia Salazar and Assemblyman Joe Lentol will take place in Williamsburg next week.

The “groundbreaking bills passed this year” and the “goals for next year’s legislative session”
will be the topics of discussion at the town hall happening Thursday, August 15, at Bushwick Inlet Park Community Room (86 Kent Ave.) from 6 p.m. – 8 p.m.