Meanwhile, some in the community felt unheard following the NYPD’s decision to promote Captain Pete Rose, head of the 94th Precinct, to the rank of Deputy Inspector on Tuesday, less than a year after Rose made a controversial statement regarding rape, saying that the crime is “a trend that we’re too worried about” given that most rapes reported in Greenpoint in 2016 were “not total-abomination rapes where strangers are being dragged off the streets.” As Deputy Inspector, Rose will still head the 94th Precinct.  END_OF_DOCUMENT_TOKEN_TO_BE_REPLACED 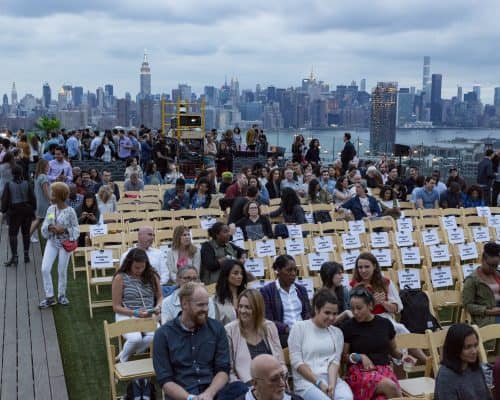 This past Tuesday night, the William Vale (111 N 12th St) hosted a screening of the fantastic new Netflix comedy The Incredible Jessica James. The event was hosted by Rooftop Films, a non-profit founded in 1997, dedicated to exposing people to new films and assisting up and coming filmmakers to produce new work.

The film stars Jessica Williams as the titular Jessica James, a young playwright in her mid 20’s navigating her emotions after a recent breakup, while keeping her spirits up amidst a slew of rejection letters from theater companies. The film follows her as she learns lessons about herself through her relationship with Boon (played by Chris O’Dowd), a recent divorcé with whom she shares a budding romance, and her students at a children’s theater company. As so many people do in their mid-20’s in New York, she starts out with a very idealistic view of where she wants to be romantically, professionally and personally, and throughout the course of the movie discovers that she is actually right where she wants to be. END_OF_DOCUMENT_TOKEN_TO_BE_REPLACED

I am sure many of you are still digesting and can think of no worse fate than standing in a line today. So here is a round-up of 10 movies I recommend on Netflix Instant, (+ 1 bonus) rather than buying into Black Friday baloney – in no particular order.

Let me know what you think and please add to this list in the comments section: Yes, every Netflix round-up WILL have a Ryan Gosling movie if I have my way, but he is NOT my favorite character in this “Bangkok Fight Club” ultra violent, gorgeously lit and impeccably scored film, which is to be expected from Nicolas Winding Refn, who also directed Drive. I will say I am more obsessed with the good (?) cop whose sick and twisted idea of punishment makes you wonder whether his brutality is worse than the crimes he avenges. And to top it all off, he is a karaoke genius. END_OF_DOCUMENT_TOKEN_TO_BE_REPLACED

Best Movies To Watch (On Instant) During A NYC Heat Wave!

One of my favorite Greenpointers is prone to disasters in social etiquette. If you want to get fired, invite her to a work party with your boss. While at such a party with a primetime TV producer friend, some big wigs asked her the ontological question: “What do you think of TV?”

She replied: “It’s like a litter box, you keep digging and digging and all you find is shit.”

The next day her producer friend was fired.

Every time I’m desperately searching for something to watch on Netflix, I think of this keen litter box metaphor, but in that moment I turn to another quote by Teddy Roosevelt: “Do what you can, with what you have, where you are.”

When it’s 101º outside and I’m in my underwear on my couch, Netflix is all I got. I’ve compiled a list of some surprisingly great movies to watch.

Jon and I are finally watching Twin Peaks in its entirety for the first time and it is as addictive and amazing and hilarious and creepy as everyone says. The opening music makes my brain so happy. The other night, Jon and I had a serious conversation over which character we associate with the most. Agent Cooper, of course! Once it’s over, I am not sure how we will spend evenings for the rest of our lives.

Here are my Netflix Instant picks. Let me know yours in the comments.

Go on an awkwardly hilarious adventure with a sex addict, a hopeless nerd doing everything wrong to save his marriage and a poor chubby kid who was dragged along for the canoe ride, in the Danish film KLOWN.

For the sweaty and bored narcissist hoping to get sucked into a life less interesting but as captivating as your own, try Tiny Furniture by Lena Dunham or Manhattan by Woody Allen, which is accurately described as “visually striking,” especially the opening credits of late 70s NYC.

• Meet The Fokkens: I never thought I would fall in love with elderly twin prostitutes from Amsterdam. So good.

Maybe you’re feeling in need of self-help, Ted Talks: Life Hacks will have you keeping a daily diary about for all which you are grateful or try DUMBO, if you need to learn how to love yourself again.

Wet Hot American Summer is a bunch of ridiculous thirty years old acting like teenagers and there is an unlimited supply of sloppy make-outs. (Sound like a night out in Greenpoint?) The best line: “Fuck you Dyke.”

If you want to laugh at art and the LA Art Scene,while seeing behind the scenes footage of the making of Pee Wee’s Playhouse, check out Beauty is Embarrassing about artist and genius puppet designer Wayne White.

Hot and bothered? Put that rage to good use. I never hated rich people so much and felt so helpless about the state of our economy and government than after watching Park Avenue, which is home to America’s highest concentration of billionaires, while across the river The Bronx is one of the poorest area codes. I know that isn’t a sell, but it’s a great documentary.

• Lars and the Real Girl: Ryan Gosling and a blow up doll. Enough said.

Update: after hearing my list, Jon was passionate about adding two more.

• Troll Hunter – After Jaws, this is Jon’s favorite movie because “it makes excellent use of the documentary style of horror movies, with surprisingly good special effects, like a 200 foot tall Mountain Troll, completely believable characters and it makes the possibility of giant trolls living in the woods completely plausible,” he said.

• River Monster – Jeremy Wade the shows host is the perfect mix of scientist, adventurer and self-mocking Brit who goes on incredibly costly trips all over the world in search of fresh water fish who have been blamed for human death. Even so he insists on throwing every fish back unharmed – mostly. And in yet another proverbial “nail in the coffin” on video rental stores, the local mainstay “Video Random” located on Norman Ave (off of Newel St.) is finally closing its doors. The owners, who have always catered to both domestic US tastes as well as those of the neighborhood’s Polish citizens, cite the usual factors in their decision to close up shop such as Netflix and online video streaming services to the failing video rental business model.

Currently, there’s no word as to what business will take the place of Video Random, but you can currently pick up any of their second hand DVD’s for $2 each and their previously rented blu-rays for only $5.

In case you were wondering, their copies of “The Godfather” and Brian DePalma’s “Scarface” were the first movies to go. But on the plus side, you can still pick up that copy of “Beverly Hill’s Chihuaha” on blu-ray that you’ve been meaning to acquire.

The owners were unsure of how long their doors would remain open, but they estimated they would still be there for at least two weeks.