After attending film school in Chicago, Matt moved to NYC in 1998 to start the art rock outfit God The Band, achieving cult notoriety on the local underground music scene. In the years since, he has worked as a video editor, videographer and, occasionally, film director. In 2011, he made his feature debut with the film “Love Stalker.” Matt has been a proud Greenpoint resident for over a decade and has no plans to leave anytime soon. He loves cats.

Kevin Geeks Out brings something weird to Nitehawk Cinema

Kevin Maher is a busy man. In addition to his professional duties as a producer for Comedy Central and freelance writer for IFC, Maher is a full-time husband and father of two boys. Even still, he manages to eek out just enough time to “geek out” on pop culture topics at Nitehawk Cinema once a month. His event, “Kevin Geeks Out“, offers a deep dive into a particular topic by inviting guest speakers, sharing film and TV clips, and producing multimedia presentations.

This coming Thursday, September 17 at 9:30 pm he’s taking on the light-hearted topic of the end of the world: the Apocalypse. It will be his fourth show at Nitehawk (136 Metropolitan Ave.) in as many months.

END_OF_DOCUMENT_TOKEN_TO_BE_REPLACED

Last Saturday, the Janet Kurnatowski Gallery opened its last show—HYPE—a look at the life and work of the legendary press agent Billy “Silver Dollar” Baxter. The show is a collection of writings, photos, videos and vintage audio recordings that Baxter was part of during the peak of his career in show business in the ‘60s and ‘70s.

“Greenpoint has always been made up of hardworking individuals: people who have the do-it-yourself attitude and Billy was all about that,” the show’s curator, David Ohliger, explains. “He loved the challenge of going against the Hollywood establishment. He was a true believer in doing a lot with very little and he loved undercutting the big dogs. And this show’s got it all. It’s a really unique look into a person’s showbiz life in that Mad Men era where different rules applied.” END_OF_DOCUMENT_TOKEN_TO_BE_REPLACED

The Vine Film Festival, a “celebration of filmmaking of all sizes,” took place Saturday, Nov. 9th, at Bat Haus Coworking Space in Bushwick. The festival, in its inaugural year, is a grassroots project lead by Weird Carbs in association with BABE, Brooklyn’s All Bush Ensemble. One of the festival organizers, Karly Snajczuk, declared the event an unqualified success. END_OF_DOCUMENT_TOKEN_TO_BE_REPLACED

To anyone who lived in Greenpoint prior to 2012, the Manhattan Furrier was a fixture along Manhattan Ave. for many years (it is now occupied by the Vietnamese restaurant Lollipop). The proprietor, Irving Feller, was also a prolific painter and used the back of his storefront as a studio where he would stretch canvases and render his various works. Greenpoint resident Jenn Nielsen has been working on a documentary film about Irving and his art and they are now in the process of completing funding for the film via kickstarter. You can also see a trailer for the film.

We asked Jenn some questions about the project and what’s next for the film, entitled How Big Little Is. END_OF_DOCUMENT_TOKEN_TO_BE_REPLACED


This Sunday, a number of major streets in Greenpoint will be closed down to traffic to allow for the annual “Get to the ‘Point”5K run to take place. Now in its 21st year, GTTP is a fundraiser organized by the good people at St. Stan’s church over on Driggs helps to provide for an education to over 250 children each year through their Catholic academy. The cost is only $20 in advance of race day ($25 day of) and you get a t-shirt that you will probably never wear again, unless it’s to the track at McCarren. END_OF_DOCUMENT_TOKEN_TO_BE_REPLACED
Category: Community, Events, News, Uncategorized | Tags: 5K, Fundraiser, Greenpoint, Run, st. stan's | 1 Comment

END_OF_DOCUMENT_TOKEN_TO_BE_REPLACED

Tuesday morning en route to the Nassau Ave. G train, I was surprised to encounter a large tree branch laying across Norman Ave. while resting partially on top of a guilty-looking Pepsi truck. It appeared, upon closer examination, that the tree had just been clipped by the truck, which caused some of the wood to split, taking down a large chunk of the tree with it. Traffic was closed on the street as a result of this significant obstruction.

However, as of that evening, the entire tree had been cut down and almost entirely removed. It’s a shame considering that it was a good tree that just got hit with some bad luck (or, in this case, a Pepsi truck). An innocent casualty in the transport of carbonated beverages, the city had no choice but to take it out it entirely.

Don’t you agree that Pepsi corporation should pay to replace it? Let’s keep our Greenpoint green!

On this rainy day, rather than trudging around on the subway, don’t you wish you could work from home? Or at least at the local cafe? If you do or plan to in the near future, here is a guide to Greenpoint’s Best “Work From Home” Cafés.

Greenpoint is a veritable hotbed of freelancers and work-from-home individuals who often look for places to get work done outside of the home. While there are now many different offerings and alternatives to our neighborhood Starbucks, we thought it was high time to acknowledge the best places to work from home away from home in Greenpoint.

Cafe Grumpy  (193 Meserole Ave.)
Grumpy has been around for nearly ten years and is the go-to coffeehouse for writers and freelancers. Subscribing to the “no-frills” philosophy, Grumpy does not offer much in the way of food or exotic pastries but it covers the basics with coffee and tea drinks and your essential scones and muffins. A hub of bustling creative activity, Grumpy is always near capacity when I’ve dropped in.

Interestingly, Grumpy also roasts their own coffee beans in the back of the shop which adds an aromatic perk to the experience. As expected, there is free Wi-Fi at Cafe Grumpy and the signal is strong throughout. Certainly, there’s something to be said about the “experience” of getting work done at Cafe Grumpy – it may not always be conducive to distraction-free working, but the energy therein is certainly palpable. And as Grumpy’s burgeoning trendiness (thanks GIRLS) may now soon extend to the likes of Times Square, it’s recommended you try the original, Greenpoint-flavored original.

Cafe Royal (195 Nassau Ave.)
Opening in 2010, Cafe Royal has emerged as one of the prime work-from-home spots in Greenpoint. Buying out two storefronts with additional seating in their back yard, there is a friendly vibe to the place that is quite conducive to productivity. Boasting two separate Wi-Fi networks so you always get good signal, there are plenty of power outlets to plug into if your laptop is running out of juice. In addition, Cafe Royal offers some decent food options in case your body fuel begins to run low. Prices are pretty reasonable overall – coffee refills run only a buck a-piece. END_OF_DOCUMENT_TOKEN_TO_BE_REPLACED 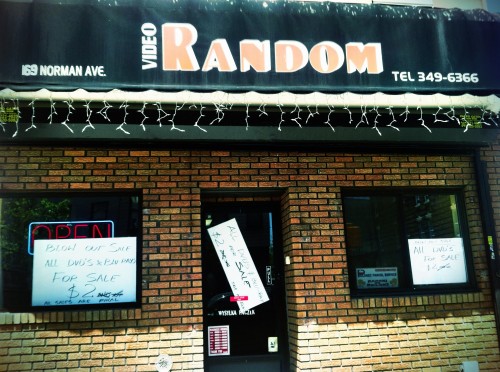 And in yet another proverbial “nail in the coffin” on video rental stores, the local mainstay “Video Random” located on Norman Ave (off of Newel St.) is finally closing its doors. The owners, who have always catered to both domestic US tastes as well as those of the neighborhood’s Polish citizens, cite the usual factors in their decision to close up shop such as Netflix and online video streaming services to the failing video rental business model.

Currently, there’s no word as to what business will take the place of Video Random, but you can currently pick up any of their second hand DVD’s for $2 each and their previously rented blu-rays for only $5.

In case you were wondering, their copies of “The Godfather” and Brian DePalma’s “Scarface” were the first movies to go. But on the plus side, you can still pick up that copy of “Beverly Hill’s Chihuaha” on blu-ray that you’ve been meaning to acquire.

The owners were unsure of how long their doors would remain open, but they estimated they would still be there for at least two weeks.

Picture Planet, a collective of local filmmakers and artists, is currently in the final stages on their debut feature: a street-balling ’80s style-comedy called Chicken which was shot almost entirely in Greenpoint. I sat down with the boys behind Chicken to talk shop over some cheap beers and free pizza at Lulu’s. The main players are Dan Bowhers, the director of Chicken, Vandall Truong, lead actor, and Mike Kolawski, the film’s producer. END_OF_DOCUMENT_TOKEN_TO_BE_REPLACED