The MTA announced overnight service changes for the G train this week along with the L train Canarsie tunnel repair project’s final schedule through next spring.

In a minor inconvenience, the MTA announced last week that the G train’s third rail will need emergency work causing trains to run at reduced frequency during Jan. 13 – 17, from midnight – 1:30 a.m.; also note that all trains will stop on the Court Square-bound platform at the Greenpoint Avenue station during these times.

The MTA has reportedly seen the light at the end of the L train tunnel (pun intended) with the release of the finalized L train repair schedule through March 2020, as repairs are expected to be completed in April 2020 “some three to six months ahead of schedule.” END_OF_DOCUMENT_TOKEN_TO_BE_REPLACED

Repairs to the Canarsie Tunnel on the L train subway line will be completed in spring 2020, Governor Andrew Cuomo announced last weekend in a press conference at the Bedford Avenue station.

April 2020 is the new expected completion date, a full three months ahead of schedule. The project includes a full renovation of the Bedford Avenue station.

Cuomo took the opportunity to scorn the naysayers during the announcement, the NY Post reports: END_OF_DOCUMENT_TOKEN_TO_BE_REPLACED

A man exposed himself to a woman while riding on the L train earlier this month and is wanted for public lewdness, according to NYPD.

The incident happened on a northbound L train near the Graham Avenue station on September 16, at 5:30 a.m. when the suspect exposed himself while sitting across from the woman, NYPD says. END_OF_DOCUMENT_TOKEN_TO_BE_REPLACED

The L train will not be in service between Lorimer Street and Broadway Junction in Brooklyn from 11:30 p.m. to 5 a.m. starting tonight (9/23) through 10/6, the MTA announced.

Service will also be disrupted overnight on one weekend in October and during all weekends in January, according to the MTA’s L Project Weekly newsletter: END_OF_DOCUMENT_TOKEN_TO_BE_REPLACED

The L train will not run between Broadway Junction in Brooklyn and 8th Avenue in Manhattan beginning at 10:45 p.m. on Friday, September 13th and ending the following Monday (September 16th) at 5 a.m., the MTA announced on Wednesday.

The new closures are related to an escalator installation at the Union Square subway station and are not to be confused with the regularly scheduled closures that are a result of the Canarsie Tunnel repairs. END_OF_DOCUMENT_TOKEN_TO_BE_REPLACED

This story was originally published on 8/29/19 by THE CITY. (By: Jose Martinez)

L train riders were spared shutdown for more than a year at the last minute in January, but other construction work pushed back by the change of plans is looming — and costs are booming.

The projected price tag for structural repairs at the L’s five Manhattan stations along 14th Street could nearly double — from $43.8 million to $77.8 million — MTA documents project.

An MTA spokesperson said some of that work would have begun during the now-canceled full-time shutdown of the L’s Canarsie tunnel in the East River, as part of a “piggybacking” onto repairs in the tunnel.

But reports that provide updates on MTA capital projects now show that a bid opening previously scheduled for May 2019 has been postponed until January 2020 to “re-examine the scope of the work in light of the changed service plan of the Canarsie Tube.”

There is no timetable for when the bulk of repairs will begin to fix steel defects in station columns, beams and braces, as well as work to repair leaks and concrete defects in walls and ceilings.

The work could potentially have impacts on riders, the MTA acknowledges, as crews come in to shore up nearly century-old stations. END_OF_DOCUMENT_TOKEN_TO_BE_REPLACED

To help remedy the disrupted commute for L train riders during the partial shutdown between Manhattan and Brooklyn for Canarsie Tunnel repairs, the MTA introduced two bus routes, the B91 and B92, which have turned out to be a flop.

Beginning this Saturday, the MTA will introduce the B91A bus to replace the B91 and B92 buses in response to low ridership where “two or three riders per trip,” are the norm, NY1 reports.

L customers: Starting this Saturday, a new Williamsburg Link bus route will replace the current B91 and B92 routes. 1/5 pic.twitter.com/IJq1ObY4MD

According to the weekly L train newsletter: 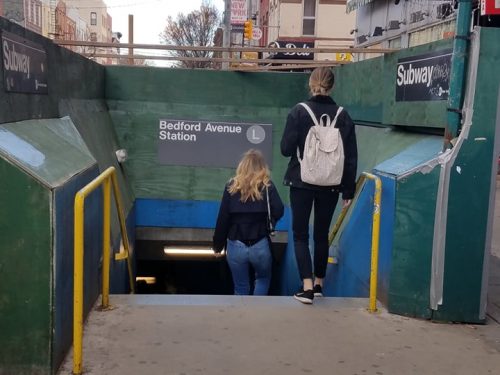 We are just a week away from the Cuomo non-shutdown of the L train, as the unreviewed Canarsie Tunnel repair plan officially starts April 26 to fix the damage incurred during Hurricane Sandy, with expected completion in the summer of 2020.

Starting Friday (4/26), commuters between Brooklyn and Manhattan can expect L service to slow to 20-minute increments beginning at 8 p.m. through 5 a.m. on weeknights; more details on the non-shutdown from the MTA:

With the revised approach, L customers will have normal service during the highest ridership times.

Weeknights: 8 PM to 5 AM L trains run every 20 minutes between Brooklyn and Manhattan and every 10 minutes within Brooklyn. Service will ramp down starting at 8 PM to make room for work trains. Overnight, between 1:30 AM and 5 AM, the service runs at its normal frequency, with L trains running every 20 minutes.

Weekends: 8 PM Friday until 5 AM Monday, L trains run 20 minutes between Brooklyn and Manhattan, and every 10 minutes within Brooklyn. Overnight, between 1:30 AM and 5 AM, service runs at its normal frequency, with L trains running every 20 minutes.

L trains will run every 10 minutes within Brooklyn thanks to extra “overlay” trains between Lorimer St and Canarsie-Rockaway Pkwy. We’ll be running these trains during the busiest times L service is impacted by tunnel work (10 PM- 1:30 AM weeknights and 6 AM to 1:30 AM weekends). Service on the L will be reduced nights and weekends. We’ll be enhancing M, G, 7, and bus service to provide alternatives.

To compensate for reduced L train service, The MTA says it plans to increase the frequency of G, M and 7 trains:

Weekends, we’ll extend service from Essex St to 96 St-2 Av. M trains will run every 8 minutes instead of every 10 minutes during the day.

Weeknights we’ll be running 5 additional G trips between 8:30 PM and 1:30 AM. On weekends, trains will run every 8 minutes instead of every 10 minutes during the day.

Weeknights, we’ll run 5 additional trips from 8:30 PM to midnight. On weekends, 7 trains will continue to run every 4 to 7 ½ minutes.

We are introducing a new bus, the Williamsburg Link. It will operate on two routes, one clockwise (B92) and one counterclockwise (B91). This bus will provide double the bus service we normally do when there is no L service during weekend and weeknight construction work.

These buses provide connection between:

The M14A regular bus service in Manhattan will run every four to five minutes across 14th Street from 8 p.m. to 12 a.m. and to the Delancey-Essex J/M station every seven to ten minutes.

There will be no L train service between Lorimer Street in Brooklyn and 8th Avenue in Manhattan 10:30 p.m. – 5 a.m., from April 15th to April 26th, according to the MTA.

What’s the work? As part of the revised L project, we’re still moving forward with the long-term reliability improvement work we had originally planned. This includes installing signal equipment. For you this means that we’ll have the right signals ready to run the one-track operation in April. We’ll also take this time to prepare the tunnel for the rehabilitation work, delivering materials, pulling fiber optic cable and installing tunnel lights so we can work efficiently during the one track operation.

Here are the key transfer points to remember during this service change: 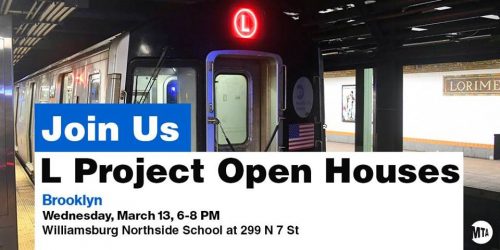 The current L train reconstruction plan is thin on finalized details, but a night and weekend repair schedule beginning April 26th where the L train runs in 20-minute increments between Manhattan and Brooklyn is expected. To help mitigate the problem, the MTA would like L train commuters to reconsider their station: END_OF_DOCUMENT_TOKEN_TO_BE_REPLACED