In its 11th year, The Korean American Film Fest’s Infinite Cinema, headed up by Chung Tsang and Mark Anthony Singh, was held this past Saturday, October 14th in the Wythe Hotel Screening Room (80 Wythe Ave).

A passage on the fest’s website reads, “Embracing the motto of CONNECT. FUSE. REPEAT. KAFFNY Infinite Cinema challenges its audience to discard notions of cultures as separate, discrete and insular, instead exploring the infinite possibilities of contact, fusion, and creation born from the mixing of different backgrounds.”

True to that directive, KAFFNY’s collection of films, which crossed multiple genres and mediums, maintained an impressive cohesiveness in its focus on shared experience, exploring distinct cultural backgrounds within the global context. Cleverly divided into five thematic segments, the fest included 25 short films and two feature length films, as well as moderated panel discussions with many of the filmmakers and actors. END_OF_DOCUMENT_TOKEN_TO_BE_REPLACED

Old Boy is a neo-noir mystery thriller that critics have called “a dazzling work of pop-culture artistry…[that] makes us feel a part of something bigger than ourselves.” With praise like that, I knew I was in for a good time, but add to it Yooeating?!’s evocative and delicious dishes, and Tokki Soju’s imaginative pours made with Soju, a traditional Korean distilled spirit, delivered at precisely the moment of the film which inspired their creation, and Tuesday’s Film Feast was one of the most exciting and satisfying experiences I’ve had at the movies. END_OF_DOCUMENT_TOKEN_TO_BE_REPLACED

Little Dokebi: A Delicious Taste of Korea in Greenpoint

Little Dokebi (85 Driggs Ave) has been open for just over a month and already it’s a huge hit.  So popular, in fact, that when we recently tried to go for a mid-week dinner the wait was over an hour-long. Fortunately, when we returned for Saturday brunch it was much easier to get a seat, though this may have had something to do with the fact that it was the snowiest day of winter so far! END_OF_DOCUMENT_TOKEN_TO_BE_REPLACED 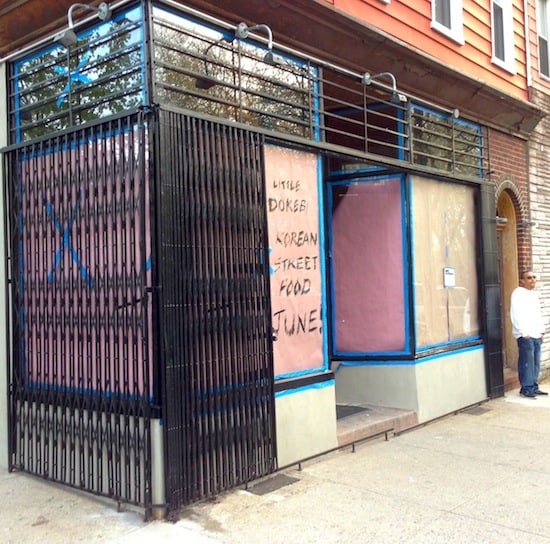