The heavy rain that poured down on NYC yesterday sparked a flash flood warning and caused flooding in Greenpoint and Long Island city affecting commuters.

The portion of India Street leading up to the pier and NYC ferry entrance was covered in water and flooded the vehicles parked on the street.

The entrance to “The Greenpoint” is open as of this morning and the “pooling” has receded on India Street for now, making for a normal @nyc_ferry commute. As a bonus, the greenspace in front of the new development is partially open.

END_OF_DOCUMENT_TOKEN_TO_BE_REPLACED

The entrance to the NYC Ferry at India Street has been flooding for months (if not more than a year) and the city vowed to take action after last week’s flooded ferry commute where multiple ferry riders shared their experiences.

Do not ever say NYers are not nice. NYers are the NICEST. Here is one now, taking time to drive fellow NYers out of flash flood zone at the Greenpoint stop of East River Ferry. He came back several times to take 25 people to dry ground. Why? Because he is a NYer. A mensch. pic.twitter.com/m5mW9wG6rN

Due to ponding at Greenpoint as a result of severe rain, service to Greenpoint is temporarily suspended until further notice. A free shuttle bus between Greenpoint and Hunters Point South will be available. For details, see service alert here: https://t.co/ezqLHZIJBX

Now the developers of “The Greenpoint,” the 40-story tower/mixed-use development nearing completion at the adjacent lot on India Street, have reached out to Greenpointers stating that they intend to remedy the situation:

While our development is not the cause of flooding on India Street near the ferry terminal, we are willing to help ease the pain for commuters while the City resolves the underlying issues regarding drainage on its property. The Greenpoint would like to immediately install a temporary elevated walkway connecting the current dead end of the northern sidewalk directly to the ferry landing on the south side. This work could be completed within days presuming cooperation and support of local officials, and would be performed at our cost. We believe this would provide a clear path for commuters and demonstrate our commitment to the good of the local community.

We have learned that the lack of proper drainage along the dead end of India Street is a condition that long predates our project. According to City records, approved drainage has never existed there. The permanent resolution of this lies with the City, and may be a slow process. The Greenpoint previously proposed alternative permanent solutions to applicable City agencies, which were rejected, but we are glad to revisit them with the City in light of the growing difficulties being faced by so many commuters.

END_OF_DOCUMENT_TOKEN_TO_BE_REPLACED

Sculpture lost on India Street. Anyone take it? 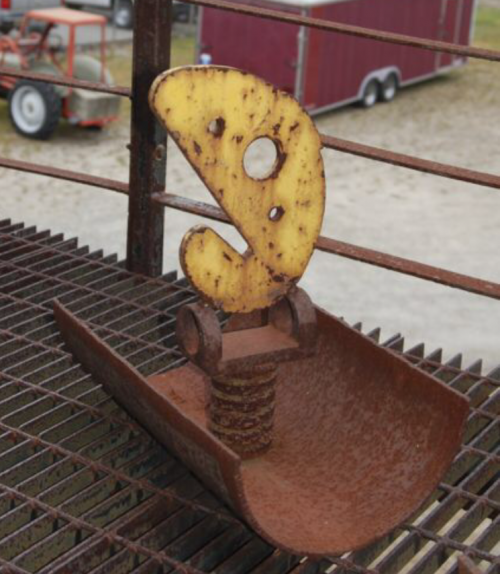 Attention dumpster divers, sidewalk scavengers, and lovers of cool rusted metal objects! Anyone see this sculpture? It was accidentally thrown out over the weekend and its owners desperately want their wedding gift back.

This past Sunday, April 18th, the sculpture was last seen alongside a heaping pile of garbage bags at 180 India Street. The landlord of the building did some spring cleaning in the backyard and mistakenly tossed out the sentimental object of art.

The sculpture is approximately 18-24 inches high. It is mostly brown rusty-metal on a rocking base. The top of the sculpture is a yellow iron piece that looks kind of like a “Pac-man” head. It is pretty heavy.

As Greenpointers reported on Monday, a duo of designers on India Street is attempting to raise funds to create a community space where a parking lot is destined to go. The deadline to raise the last $2,000 of the needed $22,000 is today, at 2:00pm.

Trish Anderson and Maureen Walsh, of Domestic Construction (a design studio), live across India Street from the lot and have spear-headed the design.plot effort to create a community space with the lot for agricultural, educational, artistic and community endeavors.

A recent Greenpoint Gazette article chronicled the duos’ efforts to save the space from becoming a parking lot, by leasing the lot and hoping that it could be made into a community garden.

The space is located on the stretch of McGuinness Boulevard above the split off from the Pulaski Bridge, making a quieter and more secluded area than further south. But with the bridge to the west, the Newtown Creek Wastewater Treatment Plant to the east, and Newtown Creek to the north, having a little oasis of green community space might mean no small amount of respite from urban pressures.

I exchanged some emails with the ladies from design.plot, who were more than eager to tell the tale.

Q. How long have you been in Greenpoint, and why is this effort important to the neighborhood?

A: We have both lived and worked in Greenpoint for about 5 years. We are both transplants. Maureen’s from Ohio and I’m from Georgia. As many people can relate, we have been living and working in an area but felt a disconnect with the amazing community that surrounded us. One thing we always missed about our lives before Brooklyn was open green space. We missed the opportunity to get dirty. When the lot entered our lives we knew we needed to save it so that all Greenpointers could have a space to explore and learn from nature.

Q. What other Greenpoint/NYC (or other) organizations have been supportive of design.plot? Have you been in contact with local groups that could use the produce?

A: We are in talks with several organizations that are in full support of the project. We are also open to any others that would want to get involved.  We want to give away the food that is grown to whomever needs it. This isn’t a money making venture. We are just very passionate about building something beautiful and educational for our community to experience. We have a network of growers and farmers with shovels ready and willing to make this happen once design.plot is funded.

Q. Are there any large/corporate donors?

A: Not yet! But for us that is why the Kickstarter platform has been so inspiring. It has been amazing to meet people that support and believe in the project. The idea of design.plot being funded little by little only solidifies the sense of community that we desire.

Q. Has there been any resistance from the space’s owner? Or are they supportive?

A: Our landlord is in full support of the project. He was only turning it into a concrete lot because frankly that is the normal thing to do on an industrial street in Brooklyn. Our neighbors (which are all auto shops and metal scrap yards) are in complete support as well. We are the only artists on the block so we stand out a bit but we have never met so many friendly and open people.

Q. What kind of film screenings do you have in mind? Have any organizations/artists expressed interest? Do you also foresee the space as a music venue?

A: For October we are in talks with thegreenhorns to have a screening of their documentary [The Greenhorns]. We plan to have plans to have fully curated outdoor exhibitions. We have a ton of talented artist friends excited about the possibility of an alternative to the typical Gallery space. We hope this interest keeps growing and growing, We imagine a multitude of different performances. As long as they are positive and can serve as a respectful meeting ground.

Q. Why the August 24th deadline? Is this because the owner wants to sell NOW? Or because the project wants to beat the cold Winter? Both?

A: We are working against the clock! The lot fell in our lap just after prime planting season. We want to be able to use this fall and winter to  prepare for next spring.

Got an email tip from reader Michelle about this final push for funds on a totally amazing project to turn an empty piece of land located on India between McGuinness and Provost into a community garden.

This is a block that definitely ain’t one of the prettiest in the neighborhood, but the ladies of Greenpoint design business Domestic Construction took it upon themselves to save the land from being paved over in concrete and made into yet another parking lot, by leasing this unused space next door to their studio. It’s now up to the community to help them raise the funds to complete it. While I can only imagine the toxins in that soil from years of industrial zoning, at some point we need to start nursing it back to health and a community garden seems like a great way to do just that.

Kickstarter projects are a dime a dozen. Everyone seems to start one for a million and one useless reasons, but there are a select few that are special and worth your hard earned dollars. This project one is one of those.

The video is adorable and even if the ladies may seem slightly stoned or something, they made a real nice save by purchasing that lot. There are too few green spaces left in Greenpoint. Check out their detailed Kickstarter page and all the cool things you can get just for donating to their cause. For just $10 you get a plant named after you!

The East River Ferry starts running tomorrow, and Greenpoint is lucky enough to have a stop via India Street.  Service is every 20 minutes during peak hours (7:30am-9:30am and 4:30pm-7:00pm) and every 30 minutes the rest of the day (ending at 9pm).  It’s free for the first two weeks, so make sure you get a ride in before the fares begin (one way tickets will be $4).  Check out the whole schedule and fare list here and a list of the local sponsors here.

You can bet your booty that I’ll be taking a boat to work tomorrow, even though I work a mile away and this is sure to take much longer.  But come on!  FREE BOAT RIDE! WEEEEE!!!!!