This Sunday the Brooklyn Comedy Festival kicks off for the third year in a row, this year with plenty of hilarious stand-up, sketch, improv, panel discussions, short films, and an evening with Reggie Watts. For $99 you can get a VIP pass to hit up all the shows all week, tickets to special parties including food and booze, entry into the pool at the new William Vale Hotel, and more. If rollin’ that fancy isn’t your style, many of the shows are free or less than $10 if you buy in advance. After the jump, check out our roundup of everything happening for the fest in North Brooklyn!

END_OF_DOCUMENT_TOKEN_TO_BE_REPLACED

Peter T, our health and wellness reporter, will be participating in this exclusive Greenpoint natural spa event he found on craiglist, and taking place on the banks of the Newtown Creek. It’s such a gem I am reposting it in its entirety:

Enjoy a total immersion health and wellness spa experience on the banks of the humble and gritty Newtown Creek, a narrow waterway separating Brooklyn from Queens, in New York City. Steeped in history and a century of environmental abuse the creek is a symbol of opportunity and a place for urban, nature enrichment. Come with us as we harvest the bounty that the placid shores of the Newtown creek yields. Learn how to reuse, recycle, and repurpose many of the things found along the way into useful, effective solutions for everyday health and wellness needs. END_OF_DOCUMENT_TOKEN_TO_BE_REPLACED

Thanks Gothamist – the best use of Citibikes yet… even though these people don’t look homeless. Whatever! 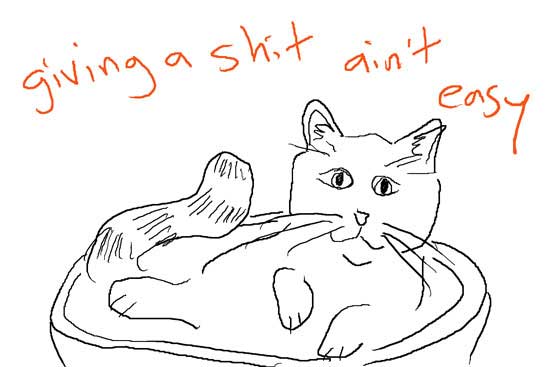 How much do cats rule? When you can’t get enough cats in real life, check out WEBCATS, a series of hilarious cat drawings along with sarcastic and witty phrases that only a cat would be thinking. Greenpoint artist Scott Chasse is the brains behind Webcats. We started worrying about Scott when he began obsessively using Tumblr to post hundreds and hundreds of cat photos daily.

WEBCATS is not only on the web, you can now purchase screen printed t-shirts made by Scott right here in Greenpoint. When the entire world almost imploded after Instagram got hit by lightening, Scott said, “this is why I had to put my internet cat drawings on t-shirts – in case the internet breaks.”

And right now you can have Scott create a digital cat drawing of your cat for only $10 (on sale.) All you have to do is send him a photo and some text (optional) and he will draw your cat in true WEBCATS fashion.  These make great birthday and holiday gifts for your cat obsessed friends and family.

VCR Party at the Nitehawk

Great news, everyone: the best thing that ever happened in America just happened, right down the street.

Nick Prueher and Joe Pickett run the Found Footage festival, a showcase for the power-nerds who scour thrift stores for unintentionally funny VHS footage, and mash it into video collages that delight and horrify. And the pair have just launched a monthly comedy night at the Nitehawk, featuring previewed material from Nick and Joe’s next Found Footage tour, as well as clips from other collectors and comedians sharing their own home movies.

The opening night was a joyous celebration of nerdy, no-brow insanity, with so much fantastically inappropriate and wonderful stuff on screen, it’s difficult to excerpt. But a mere fraction of the evening’s entertainment included:

–       the greatest amateur cable access performance artist in history (suggested title for a typical piece: “masked patriot in flag thong covers self in food and dances poorly to Beethoven for studio audience of bored seniors”).

If you haven’t ALREADY decided to attend the next show based on that list, we wash our hands of you.

Greenpointers would liken this show to a night spent watching the best of YouTube, plus delicious food and beer. But that comparison is woeful. It’s more like the President of YouTube and Charles Foster Kane co-hosting a private tour of their secret video vault, packed with footage of such intense human idiocy that only trained minds can fathom it. Plus delicious food and beer.

The next show is in the works, with the date yet to be scheduled. Tickets are not yet available but follow Nick and Joe for developments here and here, and Greenpointers will try to get the word out as soon as tickets go on sale.