A summer without tourists may sound ideal to locals, but certainly not for hotels and restaurants. The hospitality industry in particular has been hit hard by the forced closures and limited operating restrictions during COVID-19, and North Brooklyn hotels are getting creative with ways to attract and distract locals during the pandemic. Looking for a staycation within walking distance? Check out what the hotels in the neighborhood are up to:

The upscale ambiance of Le Crocodile‘s outdoor patio has lured in diners to feast since the Wythe Hotel’s restaurant reopened earlier this month, and the hotel cheekily lists a hotel room (market price) below the peach melba and flourless chocolate cake on the dessert menu. A ‘Come for Dinner, Stay the Night’ package allows Le Crocodile guests can book a room at the hotel at an exclusive rate. Those eager to extend their stay for three or more nights are also treated to a complimentary movie screening of their choice in the hotel’s screening room, popcorn included. Those who need to focus on projects or just work outside of the house for a while can also book private office space (a converted hotel room, re-furnished for productivity), which starts at $200 for 10 hours, and includes an outdoor terrace.

The Box House Hotel’s expansive rooftop space usually reserved for weddings and private events has re-launched for the summer as Top of the Box, an outdoor bar with skyline views. The 10,000 square foot rooftop offer socially distant seating, plus a full cocktail menu and light bites. Reservations are available via Resy. A QR code menu offers completely contactless ordering. During the day, YO BK hosts yoga and pilates classes atop the roof, and the bar functions as a healthy juice bar. END_OF_DOCUMENT_TOKEN_TO_BE_REPLACED

Welcome to the Hotel Greenpoint

Early this week, we got word that a four-story warehouse on Norman and Henry St is being converted into a hotel by architect, Robert Scarano. The Department of Buildings approved the most recent plan on 5/8, which is a less than a year since the owner began evicting tenants.

The Henry Norman Hotel, as it will be called, will be run by the same people who own Box House Hotel (77 Box St). Anyone been?

As Curbed points out, “the hotel’s teaser site has a photo of some dude named Henry Wylie Norman, who has absolutely nothing to do with hotels, Greenpoint, Brooklyn, or even the United States.” Hmmm.

This past year a public walk-thru of the Greenpoint Hotel, a Single Room Occupancy (SRO) at 1109 Manhattan Ave revealed mold, rats, and heat, hot water and electrical problems. The property has been purchased along with authority over ALL the tenant leases and there is talk that it may be demolished completely and transformed into a hostel. END_OF_DOCUMENT_TOKEN_TO_BE_REPLACED 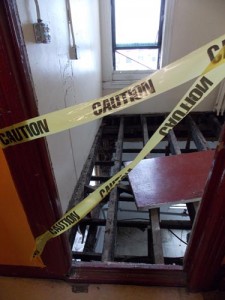 Greenpoint gossip from people who are better bloggers than I.

Someone lost their friend on Devoe. The really strange thing is I was born on Devoe and my last name is Carroll. Though there is no relation, I sincerely hope this guy isn’t dead.

Although not actually in Greenpoint, Ikea is opening June 15th. You can get there via the B61 which runs through Greenpoint. And hey, we need cheap furniture, too, ya know. – Only The Blog Knows Brooklyn

This Saturday you can take a Bike Tour of The (Future) Brooklyn Waterfront Greenway. The 10-mile ride at a family pace begins at Newtown Creek in Greenpoint to the spectacular waterfront in Red Hook. I’m guessing ‘family pace’ means it’s not going to be Lance Armstrongs and the spandex mafia.

The Fashion Skool of Hard Knocks featured some Greenpointers (and I use that term loosely) dressed in true hipster attire on the corner of Greenpoint and Manhattan Aves. Though I gotta admit I am a little in love with that purse chick number three is carrying.

I cannot believe that someone owns this car in Greenpoint. Please, please tell me there were California plates on this whip. Malibu, even?

As someone who loves, collects and sells vintage for the last ten years it makes me really sad to hear about this. Just think of all those Etsians who could have made trinkets and things with all the potentially amazing vintage stuff in there.

Ever wonder what Winthrop (McGolrick) Park looked like in 1913? You can spy PS 110 in the right corner, too.

Bette Midler came to McCarren Park to plant trees for Arbor Day. Did The Divine Miss M come as C.C. Bloom? Or maybe she sang The Rose? Ok, I’m all out of planting puns.

The Greenpoint Hotel is apparently now a Bed & Breakfast. Does everyone who stays there get a free vial of crack, too?

The trials and tribulations of Studio B and their roof deck has been all over the blogosphere. They were hit with a stop work order last week which I imagine might put a cramp in their May 2nd debut. The locals are *really* pissed with this place. The last thing you want is a bunch of people organizing themselves for a good ol’ fashioned lynchin’. The hipsters and the locals alike are getting involved in this. Since the place never has anyone I want to see, I personally don’t give a rats ass what happens to ’em. Between them and Club Exit, the only people who would be missing them are the makers of glow sticks.

The Greenpoint chocolatiers aka the Mast Brothers have snagged themselves a Williamsburg factory to make their bars. I have yet to try them myself, but I am a big fan of expensive chocolates… It makes you eat less when you have to pay more.

And if you’re home and not doing anything right now – hangout along Franklin Street between Greenpoint and Kent to see some stars filming New York, I Love You. I have an unnatural affection for Shia LaBeouf so I’m heading out to stalk – er, I mean observe, him.