END_OF_DOCUMENT_TOKEN_TO_BE_REPLACED

Cassette is adjacent to the Kickstarter HQ on Kent, which is somewhat convenient since one of the partners is Kickstarter founder Perry Chen. In creating the new restaurant, Perry teamed up with Henry Rich, owner of Boerum Hill’s popular neighborhood Italian Rucola. Also hailing from Rucola is head chef Joe Pasqualetto whose passion for good, simple food means that Cassette’s veg-focused menu is primed for success from the word go. END_OF_DOCUMENT_TOKEN_TO_BE_REPLACED

French-Catalonian Restaurant to Open on Franklin Street this September

A lot of  local places describe themselves as ‘neighborhood restaurants’. But, aside from location, what does this actually mean?  That a place is affordable? Has good food? Friendly service? Lots of regulars? Staying power?

Recently I met with some of the team behind the soon-to-open restaurant on the corner of Franklin and Kent streets.  They told me all about their plans to create their own take on the ‘neighborhood restaurant’ in Greenpoint and it sounds as though they could be on track to get the formula just right.

The restaurant, which currently goes by the working title of ‘Clouet’, is headed up by Henry Rich, owner of Italian restaurants Rucola in Boerum Hill and Fitzcarraldo in East Williamsburg. Henry is teaming up with Perry Chen, the founder of Kickstarter, with the pair having become friends after meeting at a barbecue. END_OF_DOCUMENT_TOKEN_TO_BE_REPLACED 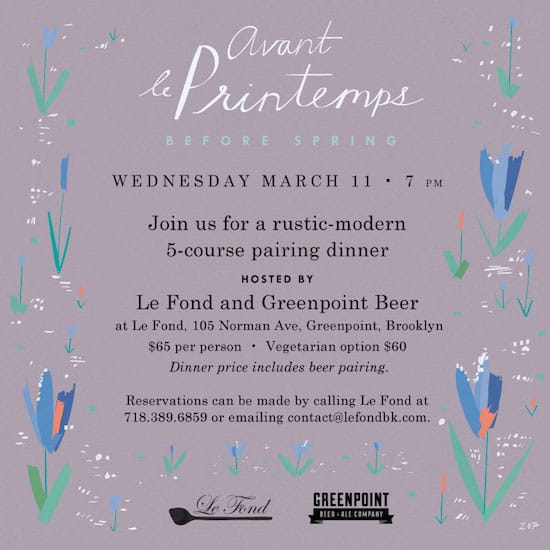 It may be March but it’s still a vile slush-pit from hell out there and is nowhere near as springy as any of us would like. However, the good folks at Le Fond are realistic with their expectations of the seasons and next week will be hosting a one-off pairing dinner sensibly titled ‘Avant le Printemps’ or (as Richard Linklater might say) ‘Before Spring’.

Chef Jake Eberle is teaming up with Greenpoint Beer & Ale Company to present a delicious five-course rustic modern dinner where each plate is carefully paired with a different local brew. END_OF_DOCUMENT_TOKEN_TO_BE_REPLACED

Regular visitors to Greenpoint Library (and indeed anyone who frequently crosses the intersection of Norman and Leonard) may have noticed that changes have been afoot around that area recently. Antek, a Polish restaurant noted for its fine pierogi, has closed down and in its place has arisen a charming new French bistro, Le Fond.

The creation of Le Fond (105 Norman Ave) involves a fruitful collaboration of the old and new. It came about when Antek owner Stanislawa (Stasha) Prenkiewicz advertised on Craigslist for somebody with a strong vision and business plan to come onboard and relaunch her restaurant. The ad was answered by local chef Jake Eberle, who’d been looking for the right opportunity to open his first business. Stasha was excited by Jake’s proposal and a new partnership was born. She handed him creative control of the space whilst remaining involved as a silent partner. END_OF_DOCUMENT_TOKEN_TO_BE_REPLACED

We can all agree that Greenpoint majorly delivers on the foodie front – with one exception – lunch. The biggest complaint I get (and I get ALOT of complaints) is that there aren’t a TON of lunch spots to chose from. We Greenpointers want choices! Well, guess who just rolled out not only a new lunch menu, but also dinner AND brunch service, that also includes wine? Charlotte Patisserie on Manhattan Ave. And don’t forget their incredible outdoor space and the infinite array of drool-worthy desserts! END_OF_DOCUMENT_TOKEN_TO_BE_REPLACED
Category: Eat & Drink | Tags: backyard, breakfast, brunch, cafe, cake, Coffee, coffee shop, dessert, dinner, drinking, eating, Food, foodie, french cuisine, french food, french pastry, greenpoint food, greenpoint restaurant, lunch, manhattan ave, new menu, outdoor dining, pastry shop | 0 Comments