Posted by Billy McEntee | January 30, 2019
Tweet
For native New Yorkers, this might be (another) hard Super Bowl to endure as the Patriots are (once again) competing. But if you want to watch Maroon 5 perform while a major sporting event happens to surround it, Greenpointers has a few suggestions of places to go to. Kick off is at 6:30 p.m., so be sure to saddle up early to claim a spot at one of the locales below: 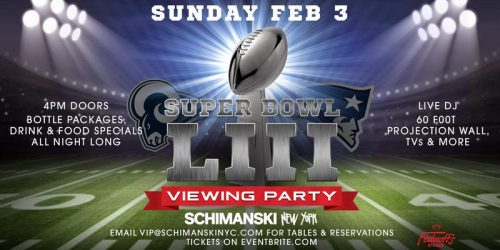 Schimanski (54 North 11th St.)
Watch the Big Game at Schimanski  in Williamsburg on Super Bowl Sunday beginning at 4 PM. The nightclub will televise the game on their 60-foot projection wall, which likely the largest in all of New York City. The kitchen will be open, serving up finger foods including wings, fries, and more while a DJ spins live pre- and post-game. Entry is free before 5 PM and other ticket options include a buffet ticket for one plate ($30) or one that includes a drink ticket for ($10). Table reservations are also available for the best seats in the house by emailing [email protected] For tickets or to RSVP visit here.
Clinton Hall (247 Metropolitan Ave.)
Stop by Clinton Hall Williamsburg where $30 buckets of beer will be served up as well as a big $25 bowl of wings.

END_OF_DOCUMENT_TOKEN_TO_BE_REPLACED

KEG & LANTERN | 97 Nassau Ave
Keg and Lantern on Nassau Avenue has a great vibe. They have many screens and a great selection of beer and snacks. The only problem is that the place might be packed for some of the bigger matches. END_OF_DOCUMENT_TOKEN_TO_BE_REPLACED

The Miracle on Manhattan Avenue: Viking Fever at Lake Street

None of the Vikings fans crowded into the bar will ever forget Sunday January 14th on Manhattan Avenue, and the football miracle that happened that day. Lake Street (706 Manhattan Ave) is a Minnesota bar, and home to local Vikings fans who take over the place every Sunday clad in purple uniforms. The Vikings were losing in the playoffs and were ten seconds away from a season ending loss. Looks of pain and anguish were visible around the room as their quarterback threw up the ball in one last desperate attempt to snatch victory from the jaws of defeat. The ball flew up and a Minnesota receiver caught it. Then, miraculously the defender behind him missed a tackle allowing the Viking player to run half the field and score what was one of the most dramatic and unexpected touchdowns in football history. In a flash, local Vikings fans moods shifted from sorrow to rapture, exploding in wild ecstasy and unbridled joy.
END_OF_DOCUMENT_TOKEN_TO_BE_REPLACED

Nowadays, Greenpoint has a bewildering number of bars, but many of the best ones aren’t really places to watch a football game. So what makes a great sports bar where you can watch all the Sunday N.F.L action (or Monday night or Thursday night or Saturday College Football)? First, the bar has to have a big screen TV, preferably many TVs, so if you don’t root for the Giants or the Jets you can still catch your team’s game. Second, the bar’s gotta have good cheap beer and preferably some kind of beer and shot specials. Also, who doesn’t watch a football game without getting the munchies? A bar that serves pub grub has to rate higher than one that doesn’t. Finally, you want to watch with a good crowd, not in some mausoleum. With those categories in mind, here is a list of the top ten places to watch an N.F.L game! END_OF_DOCUMENT_TOKEN_TO_BE_REPLACED

Although Poland suffered a heartbreaking loss to Portugal yesterday in the quarterfinals of the 2016 Euro Cup, Polish pride was on full display around Greenpoint. Several soccer-friendly neighborhood bars were packed to capacity with red-and-white clad Poland fans, many of whom could be heard shouting passionately in Polish at every missed scoring opportunity.

Poland took the lead early with a goal from Robert Lewandowski, but were unable to strike again for the rest of regulation. Portugal tied it up with a goal from the 18-year-old phenom Renato Sanches, and with a 1-1 tie at the end of 90 minutes, the game went into overtime. Still, no one scored, so the match was decided by a shoot-out, which Portugal won 5-3.   END_OF_DOCUMENT_TOKEN_TO_BE_REPLACED

This girl needs a blog! This photo proves that the Super Bowl is just as much a day for creative hostesses (and hosts) to show their skills and literally dress up a turd of an American holiday. God bless this woman!

Best Bars To Watch The Super Bowl In Greenpoint Super Bowl XLVII (#47) is taking place on Sunday February 3rd, 2013 in New Orleans. Kick-off is 6:30pm and the competing team are the San Francisco 49ers and the Baltimore Ravens. Beyonce is headlining the halftime show. (I had to google this all.)

Who are you rooting for? And more importantly where will you be funneling beers and enjoying nachos and wings? A local dive? A house party?

Below are some of the best places to watch the annual man and cheese fest:

For those of you who hate sports, look out for tomorrow’s post: Best Bars To NOT Watch The Super Bowl In Greenpoint.

Best Bars To Watch The Superbowl In Greenpoint

• The Warsaw (261 Driggs Ave)
You heard correctly, Roberta’s is throwing a superbowl party at The Warsaw and you can rent private rooms and skyboxes! Not to mention nachos and pierogis and wings and towers of beer. This will be more epic than Beyonce’s halftime show performance.

• The Palace (206 Nassau Ave)
If you’ve never been to this Greenpoint institution, now is your chance in all its local sports bar glory.

• Turkey’s Nest Tavern (94 Bedford Ave)
Technically not in Greenpoint, but one of the best sport’s bars in Brooklyn. Because they serve beer out of styrofoam cups and you can see a TV from every angle, even if you’re upside down.

• Boulevard Tavern (579 Meeker Ave)
I have one thing to say: tater tots.

• Greenpoint Heights (278 Nassau)
If you live all the way on this side of McGuinness, not sure why you would need to watch the Super Bowl anywhere else.

Red Star Bar (37 Greenpoint)
Who can forget Red Star? Not Mike (below). Plus they have the best wings in town!