A discussion on the River Street Mater Plan and the environmental review process known as ULURP will be discussed at a community meeting hosted by the North Brooklyn Neighbors this Thursday at the Williamsburg Hotel (96 Wythe Ave.) at 6:30 p.m.

Don’t forget to RSVP for the River Street Community Meeting this Thursday, 2/13 at 6:30 pm. We will be discussing the proposed development plan for the site in addition to a ULURP (rezoning) explainer. RSVP and additional details at the link in our bio.

A post shared by North Brooklyn Neighbors (@northbrooklynneighbors) on Feb 11, 2020 at 8:04am PST

There are six acres for a public park with three acres designated for water access in an area bounded by breakwaters. The three acres of green space would have have picnic tables and seating along with a nature walk and a beach on the East River for water access.

With water quality increasing in the East River, the developer’s plan for a public pool, much like the remediated Copenhagen Harbor, may not be as crazy as it sounds as Curbed explains:

And eventually, the developer wants to create a swimming spot that would be open to the public and enclosed from the river’s turbulent wake, which would put New Yorkers in direct contact with the East River for the first time in generations. It would not be filtered, like the proposed +Pool—just pure, natural East River. Lisa Switkin, a senior principal with James Corner Field Operations and the park’s lead designer, predicts that it could happen within a decade; if successful, other developers could follow suit.

“We’re a city that has decided not to retreat,” Switkin says. “And if you’re not going to retreat, you have to change your relationship with the water. This whole idea of living with water instead of fighting it is something that has become a new way of thinking in resiliency.”

At Thursday’s meeting at the Williamsburg Hotel the Center for Urban Pedagogy will present on the ULURP process  and attendees can participate in breakout sessions to organize responses to the plan. 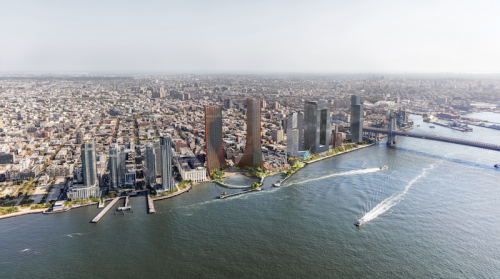