The Holocaust revisionist Edward Reid who advertised an upcoming speech in Greenpoint at Warsaw (261 Driggs Ave) allegedly scheduled for this Sunday never ran it by the venue. “It was never actually booked, they put up this poster without our consent,” said Adam Romanowski, production manager at Warsaw. The event was never listed on Warsaw’s internal calendar he said.

Romanowski said he became aware of Reid’s marketing of the speech this morning when Warsaw’s social media was flooded with complaints. 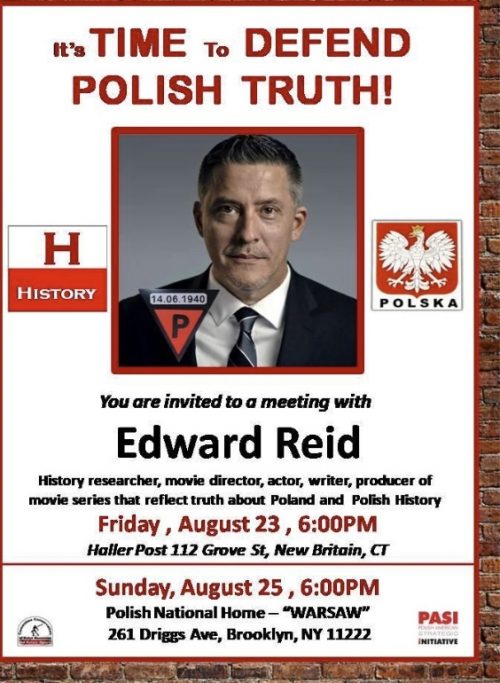 A flyer circulated online and shared by Reid this week lists his appearance at Warsaw in Greenpoint on Sunday, August 25th and a separate speech in New Britan, CT.

Reid has published videos online claiming “Jewish collaboration” in Poland during the Holocaust which resulted in YouTube banning his account.

Live Nation who manages bookings at Warsaw sent Brooklyn Vegan a statement claiming that the venue booked the event separately:

Live Nation, is among many promotors that books shows at The Warsaw. We were just made aware that Edward Reid was booked separately by the venue without our knowledge. After voicing our concerns to the building’s landlord regarding the reprehensible and repugnant nature of this individual’s subject matter, this appearance has been cancelled.