Thursday Spotlight: Tommy Kha and the “negotiation between worlds” 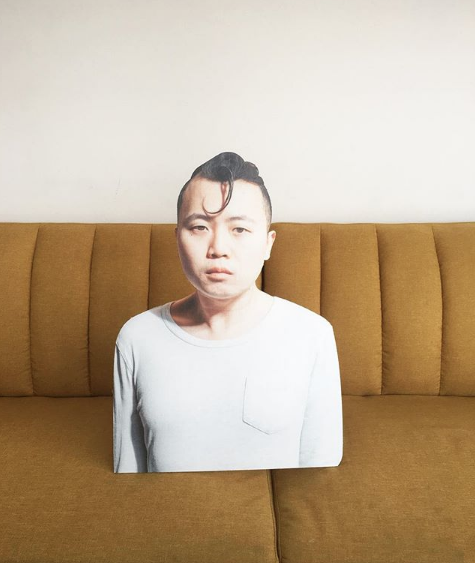 To complement last Thursday Spotlight’s article on Meena Hasan, today, we speak wtih fellow artist Tommy Kha who, alongside Meena, is deconstructing identity through their joint show at LAUNCH F18 Gallery in Tribeca. Tommy, a Greenpointer of multiple years, is a photographer who elevates the mundane and finds touches of surreality and the bizarre in the quotidian (as evidenced from some samples sprinkled around his Instagram).

Greenpointers: You live in Greenpoint, I hear! What’s it been like to work in a community so rich in visual artists?
It’s odd, this is the beginning of my fourth year here and only now, I feel I can settle in and unpack my anxiety and work. I’ve lucked out to be near my schoolmates that my existential status feels less isolating. It’s a sight to see spaces like DAAB, the Java Project, the Greenpoint Gallery, and my artist friends pushing up against stones and making work, in turn, I find myself pushing as well.

Your current show at LAUNCH F18 Gallery in Tribeca wrestles with the effects of imperialism. Can you discuss the pieces you contributed to this exhibition?
I wanted to go in the opposite direction as my previous iterations of my self-portrait work, being given the space to present work less about performed Otherness but being a product of colonialism. I’m more concerned with the direct experiences my mother and family members has had.

The portraits I’ve made of her from our long-form collaboration are alongside photographs she made back in 1984, the year she successfully fled Vietnam (Old Country), which is something g of a familial trait — my great-grandparents fled 1930s China (Older Country). I didn’t know she made photographs at some point, it’s striking for me to see them because

I view photography and art differently than my mother’s generation, whose life’s experiences were contingent on survival and non-conforming (my mother went through an indoctrination camp).

Additionally, I’ve included newsprints for people to take, on one side are Southern landscapes and interiors, on the other side is an illegible article recalling my aunt’s murder, fading over the four images, which I never quite resolved her death.

You’re sharing a show in Tribeca with another Brooklynite, Meena Hasan. What does it mean to have your pieces be in conversation with each other?
The show is something we’ve been discussing for quite a while — mainly we had a similar experiences to being offsprings of immigrant parents, being Asian, being American, the constant negotiation between those worlds, feminism, and a feedback loop not aligned to our image. The disparate in mediums and experiences through gender, sexuality, and race dissolves.

This may be a broad question, but as a photographer, what kinds of subjects or themes interest you?
The first photograph I made was a venue marquee in New Orleans, and when I started making photographs, I made portraits. Though, I’m very interested in the performance for the camera, how Western canon has influenced the depiction of Otherness, the act of picture making itself, and humor as a way covertly speak on serious issues. I’ve read something in a Miami art museum explaining those theatrical faces — explaining that Greek playwrights believed humor and tragedy are the basis of human experiences. I continue to go back down South throughout the year and aimless hunt and gather landscapes and interiors, spaces that are peppered by Asian diaspora, or queer figures who haunt them, and in general, the American South as a site of parallel and conflicting narratives.

You’re from Tennessee and your website features a portrait of Southern lifestyles. What was it like growing up there and how may it have influenced your perceptions and work?
There’s a sense of urgency to hold on to the past while reconciling its fleetingness, in moving forward. I’m haunted by Eggleston, Christianberry, and Sally Mann, and much of my color work is indebted to Eggleston, but I’m very much a product of immigrants who do not hold onto such sentiments to photography and art. So perpetually, I think through my staged and straight photographs, I’m confirming both experiences of Otherness and homogeny to Western canons. At the same time, in inhabiting both worlds, I’m hoping not to answer or resolve anything necessarily, but to give myself permission to exist in those worlds and communities.

Any other projects coming up you’re excited about? Anything else you’d like to discuss?
Yes! I’m currently preparing for some shows later this year. Particularly, I’m excited to show my Kissing Pictures, for the first time, in its near totality at LMAK Gallery through print, installation, and a unique projection. I’ll make my way to Elvis Week in Memphis later this summer to continue meeting these amazing Elvis Tribute Artists while doing two publications.