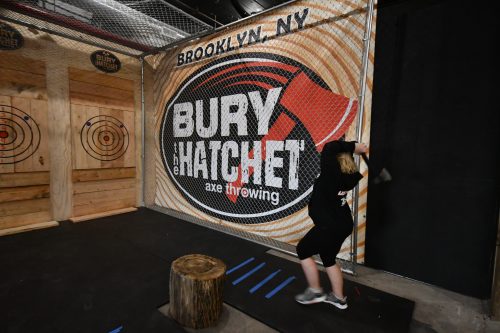 Hatchet and Hops, a Buffalo-based axe throwing bar is planning to open at 98 N. 11th St. in the Greenpoint-Williamsburg Industrial Business Zone between Wythe Avenue and Berry Street. The business signed a 10-year lease on the new venue and also operates a mobile axe throwing station called the Axemobile; the Williamsburg space is their first New York City location.

Opening in Downtown Brooklyn this May at 436 Albee Sq., Bad Axe Throwing is currently building their space and is the first commercial tenant at the new development known as “The Azure,” according to the Commercial Observer.

Kick Axe (622 Degraw St.) opened in Gowanus in the winter of 2017, seemingly kicking off the growing axe throwing bar trend.

While drinking alcohol and wielding a sharp object may instinctively seem counterintuitive, axe throwing bars so far have operated without major incident and review sites such as Yelp list dozens of positive reviews for Brooklyn’s exisiting axe bars.

A close call at Colorado axe throwing bar earlier this month went viral after a woman narrowly dodged an axe that bounced back off of the target towards her head.