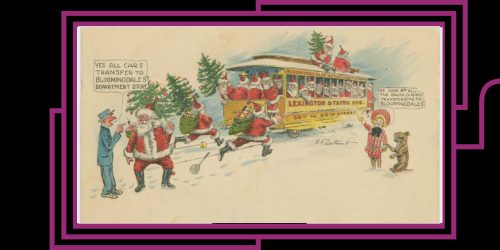 Hey Greenpointers! Are you ready to deck the halls…with History?

Holiday History runs deep in this town, since Santa is a Native New Yorker. It’s true! Saint Nick is the Patron Saint of New York City, and New York’s writers and artists were the first to describe and depict Santa as we know him. He even got his sleigh in Chelsea! Add to this the fact that New York retailers invented holiday window displays, the original yule log footage was filmed here, and we’ve even got the original manuscript of “A Christmas Carol,” and it’s clear New York is a veritable holiday hot spot.

If you’d like to hear more about New York’s holiday history, please join me around town this month for my Hometown Holiday History event series!

Santa’s from West 23rd Street and other Secret Histories of New York Holidays @ Caveat (21A Clinton St.), 7pm, $15, I’m so thrilled to be joined by two incredible storytellers who will add to the historic holiday fun with tales of the ancient roots of the Winter Solstice, and the origins of Santa’s reindeer! Buy Tix

TRIVIA Night: Deck the hall, drop the ball! @ Archestratus (160 Huron St.), 8pm, FREE, you know the drill for this one, Greenpoint! This month’s Trivia will be Holiday/New Year’s themed. Feel free to swing by solo, or with a team of up to four, to strut your stuff, win wonderful food and drink, and claim the title of Greenpoint Trivia Champ! RSVP