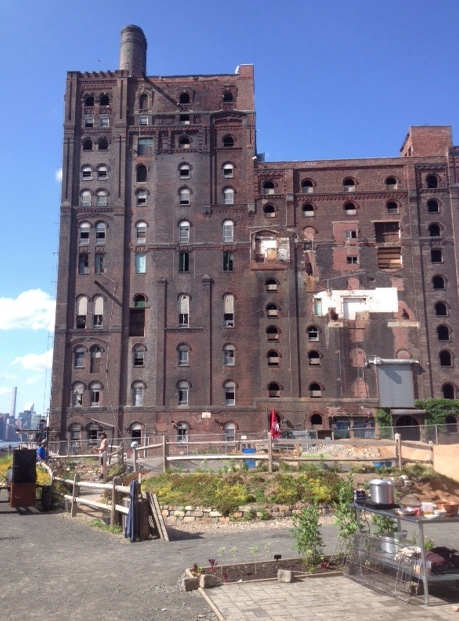 The refinery, the largest building in Williamsburg at the time, was nine stories high, covering an entire block on Wythe Avenue between South Third and South Fourth streets and stretching some two hundred feet in from the street to the East river shore. Having been in the sugar business for more than eighty years, the Havemeyer family knew the danger that fires often broke out in sugar refineries. The presence of steam, thousands of moving parts that could cause sparks in the refinery and the highly flammable sugar all made fire a grave risk. For a quarter century they had refined huge amounts of sugar without incident, but their luck would run out that January day.
At about three o’ clock in the afternoon, Theodore Havemeyer made his customary inspection of the plant and noticed nothing suspicious. Three watchmen, two superintendents and two assistants remained in the refinery. The night shift was just appearing at 4pm when watchman Edward Haman began to smell smoke and found the flames in a storeroom on the refinery’s first floor. Dense smoke quickly filled the room and flames soon leapt from storeroom. The watchman pulled an alarm, alerting the plant’s workers and sending a signal to the fire department. About fifty hands on duty at the plant rushed to refinery, grabbing hoses and attempting to put out the blaze. There were precious minutes of indecision, which wasted critical time in finding and turning on the water spigot for the hose. Four horse-drawn engines responded to the first alarm and four additional companies also answered the second alarm, but twelve minutes had elapsed since the fire was reported, and this interval had given the fire time to spread. The fireboat Havemeyer even appeared on the scene from Manhattan, trying to douse the flames, but all the firefighters’ efforts were in vain. 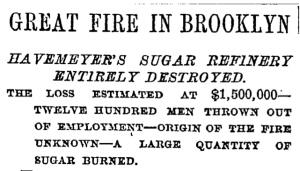 The fire moved both upwards and downwards at an alarming speed. Dense masses of potentially flammable vapor poured into the areas where the workers were now using the hose to douse the blaze. Other workers were removing stacks of records, while some others were trying to wheel out barrels of sugar. But soon, choking fumes reached the area where they were unloading the barrels and they had no choice but to abandon the plant.

Outside the factory the first fire companies quickly deployed, frantically setting up ladders, while spreading out hoses. When the firemen and company employees looked up, they realized that it was already probably too late. Fueled by tons of sugar, the fire was racing upwards and flames could soon be seen in many of the windows. The heat from the fire was so intense that many of the fire fighters developed blisters on their faces. Firefighters had to move back from the building’s façade due to amazing heat of the fire. A number of vats of alcohol blew up, sounding like cannon fire. As the sugar burned it glowed in a rainbow of colors, the beauty of the flames masking their deadly effectiveness.

Chief Smith, immediately realizing the scope of the blaze, called in a third and fourth alarm as other companies rushed to the scene. The flames had reached the pan filter rooms, adding coal to the already hot blaze. The flames raced upwards in the seven stories that faced Kent Avenue. As they went higher and higher they could be seen in other neighborhoods and soon the alarm bells and the shooting flames attracted crowds of fascinated onlookers. A brilliant glow of flame filled the foggy night sky, which could be clearly seen far away in Queens and even in northern Manhattan.

The firefighters were hampered by a lack of hydrants close to the great refinery. They realized that wind might spread the conflagration to other sugarhouses and there was the real possibility that all Williamsburg could burn down. There was a covered second story bridge connecting the refinery to the boiler house on South Second Street that could allow the fire to spread. Chief Nevins, who had just arrived on the scene, ordered the bridge taken down and the firefighters had just commenced cutting the span from the burning building when the burning refinery walls began to sway, signaling its impending collapse. A panic ensued and the firemen instantaneously abandoned their task, fleeing from the bucking walls. Only a few seconds later three stories of brick and mortar came crashing down the to street, severing the bridge and fortuitously achieving the aim of the firefighters in limiting the spread of the flames.

A few minutes later the steam pipes burst, and the hiss of their exploding was loud enough to be heard above the din of the flames. Realizing that the job at hand was to save the new refinery building on the other side of the street, Chiefs Smith and Nevins deployed their men inside and outside the structure across the street. He sent a team up the winding inner staircase with a long hose and another up the fire escape on the exterior of the building. Both crews did excellent work fighting the fires that threatened to jump the street.

Suddenly, a massive section from the top of the old refinery came crashing to ground in the shape of a giant V. Much of the falling material hit the new refinery, engulfing it in flame and threatening to create a second inferno.
Then, the roof of the old refinery collapsed and a gush of flame shot up like lava from a spewing volcano. The flames from the burning refinery soared over the top of the ruins, lighting up the river, and there was a lurid beauty to the ghastly spectacle that attracted huge crowds along the Manhattan shoreline who watched spellbound by the blaze.

At about six o’ clock, the remnants of the wall of the old refinery facing Kent Avenue, which had previously crumbled at the top, buckled and collapsed in a deafening roar as a great cloud of smoke rose from the street. When the cloud disappeared they could see the entire interior of the doomed refinery. The fire burned green, fueled by the chemicals that only a short while ago helped refine the sugar. The south wall finally gave way, crumbling to the ground and showering the street below with brick. It soon became apparent that the danger of the fire spreading had passed and that the fire would slowly burn itself out, consuming the remaining parts of the massive refinery in the process.

Then just as it seemed that the fire was contained, flames broke out in the new refinery, fueled by the collapse of burning wooden tanks on the building’s roof, but the firemen stationed there fought heroically and contained the blaze. A half hour later they had doused most of the fires in the new refinery and finally the danger had truly passed.

Theodore Havemeyer, who had built the refinery twenty-five years earlier, helplessly witnessed the lurid scene in total horror. Interviewed by a throng of reporters, Havemeyer was asked to identify the cause and to estimate the extent of the damage. Havemeyer could put forward no theory explaining how the fire had started. He put the figure of the total loss at $1.5 million. He also reckoned that the value of the plant was $250,000, and the machinery inside was worth $750,000. He further estimated that the sugar stores inside the plant were worth a half million dollars. A thousand two hundred men who worked in the old refinery would be put out of work. The refinery had been insured with several policies, but its value was so great that its total value could never have been fully insured.

The loss was devastating, but the family decided to rebuild and used all its vast financial resources to rebuild. Eighteen months later the new refinery was complete and it was even bigger and more state-of-the-art than the one destroyed by fire. It would be the crown jewel in a sugar empire that would soon dominate America and make the Havemeyers among the richest men in the world.