Black Kids have gotten perspective from afar away on every level. Almost four years ago Reggie Youngblood moved to Athens, Georgia and the rest of the band members live in Brooklyn, Portland and Florida.When he was a bit younger, besides his well-proclaimed love of music (and Morrissey), he found inspiration in novels, films and alcohol. He does lament that books have taken a backseat to Netflix and TV but perhaps that is just right for these streaming-from-internet times we find ourselves in. He still uses “the good old inspiration standbys of eavesdropping on conversations and drawing from whatever relationship I find myself in.”

The band’s first full-length album, Partie Traumatic was released in 2008, so what about that close-to-a-decade delay for Rookie‘s release? Well, the main reason was that “the songs just weren’t there for us, even when we went into the studio, we weren’t sure how things were going to play out.” Reggie explains that he really needed to take his time as “my heart wasn’t there…[it was part of the reason] I moved to Athens, I wanted to just play guitar music and play louder [for a while].” He explains that the space was necessary for the creation of Rookie, kind of like farming where you let the seeds be in the soil for a bit before any growth occurs. And that’s when Black Kids were able to create music that left them inspired and feeling good about releasing it into the world.
Black Kids will be performing in Greenpoint’s backyard, at Baby’s Alright (146 Broadway) on Monday October 23. Tix are $15. 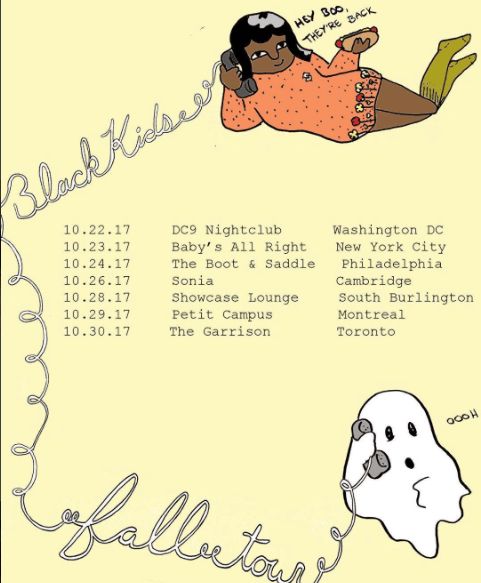 Carolina writes about contemporary art, style and other lifestyle related subjects. She also works in branding, photo shoot producing and creative directing all around NYC.
View all posts by Carolina Mesarina →