Westlight Celebrates One Year in Williamsburg

The William Vale hotel is one of the most obvious additions to Williamsburg’s skyline and the beautiful Westlight sits at its very top. Luckily for us, they scored James Beard-winning chef Andrew Carmellini to create outstanding menus throughout The William Vale, not just at the street-level Leuca, his first Brooklyn restaurant. Chef Carmellini is no stranger to the transformation Williamsburg has undergone and is proud of his contribution. “When I used to come down here in the 90’s with my guitar, I’d get off the train and there was nothing here. There was the Turkey’s Nest and that was it and there was never anyone here,” says Carmellini. Westlight has helped draw a crowd to the area and is now entering its second year. 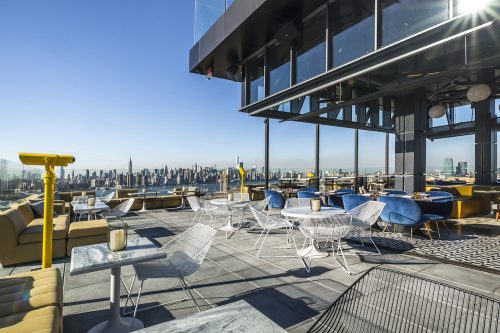 Unsurprisingly, Westlight’s 22nd story view remains unsurpassed in Williamsburg and is the main draw to the bar. You can’t go wrong with the menu by Carmellini—he’s also behind Locanda Verde, The Dutch, and Bar Primi, among others—and reasonably priced drinks (after all, this is a hotel).

Menu items range from small bites to hearty fare and include Seared Octopus Skewers ($15), Crispy Potato Skins with Kaluga Caviar, Yuzu Hollandaise ($18), and the Westlight Burger; dry-aged beef, mushroom & onion jam, Gouda, Secret Schmear ($18). Try the tequila-based, False Start ($16) or their spin on a classic, the Negroni Sbagliato ($15). Beers from $7. Bottles of wine are available ($55+) and a great option for lingering at your table to watch the sunset.

“Westlight is more of a cocktail, light fare, bar food advanced, very, very much on purpose. The scene, a rooftop is a rooftop. I’m very proud of what we did up there because if you go hang out at rooftops, 95% of the time it’s an epic shit show and Westlight is definitely not an epic shit show,” says Carmellini. You will find that the line for the elevator moves quickly and functions to keep the bar from overcrowding. Friendly hosts and attentive servers make this experience a stand out from most Manhattan rooftop establishments.

The lounge draws a mixed crowd of hotel guests, successful first dates, and large groups of friends. The spacious interior is matched by an equally expansive wrap-around terrace with comfy outdoor lounge seating and unparalleled views of Brooklyn, LIC, and Manhattan. The posh interior design by Studio Munge is modern with a vintage vibe, which won them the Design of the Year at the Eater Awards.

Consequently, Westlight mirrors the “new” Williamsburg as luxury boutiques and million-dollar apartments dot the streets below. While this will never become your local watering hole, it’s not meant to compete with those establishments. Westlight is just one of the NoHo Hospitality Group’s mark on The William Vale. In addition to the southern Italian-focused Leuca, NoHo Hospitality and Carmellini are also behind the Vale Park trailer Mister Dips, made famous for its burgers, dirty dipped waffle fries, and towering soft serve.

“In the end, it was really important to me that we served a great product, but we are super friendly and become part of the neighborhood,” says Carmellini. In that vein, the whole neighborhood is invited to tomorrow’s Mister Dips Block Party marking its one-year anniversary and benefiting the Open Space Alliance For North Brooklyn (OSA). The event takes place at Vale Park at the William Vale this Saturday, September 23rd, from noon until 5pm. If you make it out to the event, don’t miss the view from the 22nd floor!