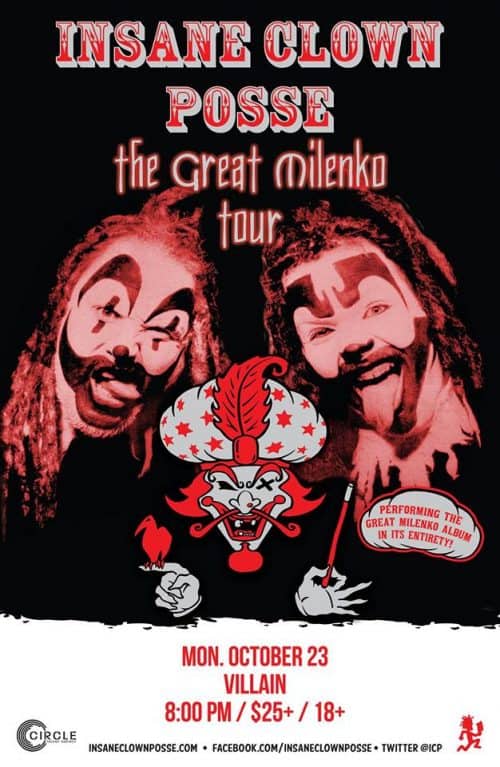 The infamous Insane Clown Posse and presumably, their posse of clown-faced juggalos, are bound for Brooklyn with a show at Villain (303 Kent Ave) in Williamsburg on October 23rd where they will perform their classic hiphop album The Great Milenko in its entirety. Why should you be afraid? Well, according to Wikipedia, these are some of the identifying characteristics of juggalos:

And, shit got (literally) real in 2010 when juggalos threw feces and stones at actress Tila Tequila while she was performing on stage at the band’s annual Gathering of the Juggalos. The event, if you have not already heard tell of it, is more than a concert or music festival; it has been described as a free-for-all “demented utopia” and a “heavy metal shit-show”. This September, juggalos will march on Washington to protest being called out as a gang by the FBI. You can not. Make. This. Shit. Up.

And if you happen to be an ICP fan or just want to watch the killer clown horror show, tickets are available for $25 for their October 23rd show at Villain (303 Kent Ave).

h/t to Brooklyn Vegan for helping us get woke to their local appearance.