A Greenpointer who Survived Pearl Harbor 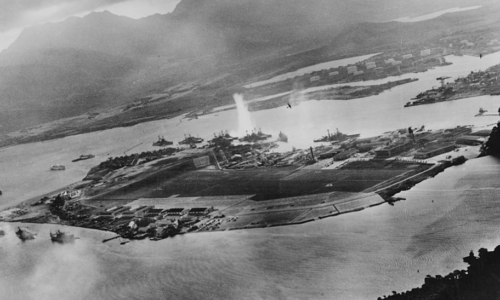 Last year on December 7th marked the seventy-fifth anniversary of one of the most momentous days in American history—the surprise attack on Pearl Harbor, in which more than two thousand four hundred American military personnel were killed and which led the United States into World War II.

Greenpointer and United States Navy Botswain John Hogan was there that fateful Sunday morning. The twenty-one year old had enlisted in 1939 and was below deck on his ship, the submarine Sumner, which was moored at Pearl’s submarine base. Appropriately enough for a local boy, Hogan was reading the local newspaper, the Greenpoint Star, when he heard commotion on the deck and the alarm ring to report to general quarters. The Sumner was about to go down in history and Hogan would witness it. Hogan saw a group of Japanese torpedo planes flying low preparing to attack battleship row. The gun crew from the Sumner opened fire and took down a Japanese torpedo bomber, the first Japanese plane shot down by the surprised American forces in the war.

Hogan survived that awful day and served for two more years aboard the Sumner. Hogan would later be transferred to another submarine the Fessenden, which sank a German U-boat off the coast of Brazil in 1944. Hogan’s brother was not as lucky as he was, however. While serving in the Marine Corpse at Ie Shima island in 1944, Private First Class Daniel Hogan was killed in action.

John Hogan returned to Greenpoint and married local girl Dorothy Athinson at St. Anthony of Padua church on Manhattan Avenue in 1945. They would have thirteen children. Hogan remained in the navy until 1959. He then became a New York City Police Officer and retired from the force in 1983. His daughter, Mary Hogan, is one of the most active members in the local Ladies Ancient Order of Hibernians, an Irish-Catholic group and Hogan has served as president of the organization.