Thinking of heading up to the mountains this summer?

Some music festivals take a journey to see. For this weekend, here’s a suggestion for the Catskills but also a nice outdoor band line-up in Bushwick for those who prefer to stay close to the L train.

Plus, a reminiscence about Northside Festival.

If you miss the Grateful Dead festival scene, or don’t want to wait for the Phish tour to return back East, gather your camping gear and take the Trailways bus to Cairo to the Grey Fox Bluegrass Festival.

Just stick your bike under the bus then from the Cairo bus stop it’s about a 17-mile ride to the festival. Or you can take Amtrak to Hudson, NY.

Amtrak won’t let you take your bike on the train, so you’ll have to cab it, but at least it’s the Albany route, so it runs regularly and is fairly priced.

You can camp out right at the festival. If you do so, you will get to see people trading songs around a big campfire well into the night, and experience beautiful clean mountain air.

All told, the transport and camping and tickets will run about $200, but that’s going to be the same as you’ll pay for the usual city festivals on Randall’s Island this summer.

For those on a stricter budget or not into bluegrass, Out in the Streets is out by the Jefferson St. stop on the L in Bushwick this Saturday and Sunday.

There will be tunes and a talking art wall. It’s a good spot to hear a lot of bands you’ve heard about but haven’t had the chance to see yet. 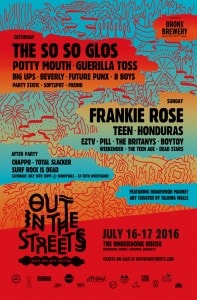 Here is a playlist for preview.

To encourage you to venture outdoors this weekend, below is a long-form essay on what Northside Festival gave to Greenpoint this past June, as penned by Greenpointer’s Courtney Bassett:

While I was only able to catch the tail end of the Northside Festival’s musical lineup, I was impressed with the range of music I heard there.

I returned to Greenpoint from an excursion up to the Berkshires for the weekend to see The National at MASS MoCA, dropped my weekend bag off at home and promptly made my way over to McCarren Park for yet another show…or four.

There was already a significant crowd assembling when I got to the park – undoubtedly in anticipation of Brian Wilson’s performance.

As I was arriving, taking the stage was ROSTAM, the passion project of Rostam Batmanglij (Vampire Weekend, Discovery). He was joined by some familiar figures from Dirty Projectors and The Walkmen (Angel Deradoorian and Hamilton Leithauser, respectively).

Rostam has collaborated in the past with Jenny Lewis and Santigold, reminding me how close the music community can be, despite stretching over disparate influences. 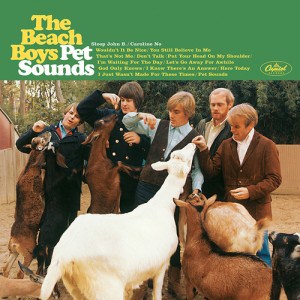 Next up was the main draw, Brian Wilson.

He led with some of his classic hits – California Girl, I Get Around, Surfer Girl, Don’t Worry Baby – and then launched into the iconic and influential Pet Sounds.

That album turned 50 in May and is being celebrated through Wilson’s current world tour with fellow former members of The Beach Boys, Al Jardine and Blondie Chaplin.

I was struck as I took a look around at the concert. I cut through the park every weekday on the way to work. It always seems like such an open expanse of land, but now was packed with festival-goers, delighted and reminiscent. I peered up to my right and noticed onlookers at the McCarren Hotel enjoying the sights and the sounds from their vantage on the terrace above. That’s the thing about a live show in North Brooklyn – everyone may be strangers to each other, but around here there never seem to be any cliques or divisions in the audience, they are all there for the music.

I also appreciated that Northside books intimate venues. At the first, Pete’s Candy Store, I caught Brooklyn’s Dead Leaf Echo thanks to a tip from a friend. At the second, Bar Matchless, I caught a band I’d listened to before but had never seen, Humeysha.

Both shows were informal and intimate, even more so at Pete’s where the narrow, dark, alcove-like space provided a resonant environment for Dead Leaf Echo’s ambient, shoegaze sound. Stay tuned for DLE’s second LP, which they are currently finishing recording in Greenpoint.

The turnout for Humeysha was solid, and within one song I could tell why – the band is even better live. The quartet’s performance was tight, polished and engaging.

The two shows reminded me that Northside, by design, was intended to expose people to new ideas and talent. It’s one thing to make that your mission statement — another for the venues to actually succeed in creating a microcosm of that intended experience.