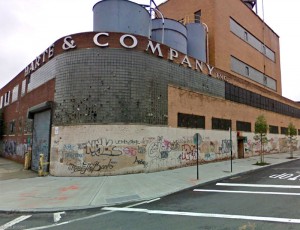 In the meantime, here are a few of the latest updates from the land of jackhammers drilling into toxic soil.
The NuHart Feasibility Study is still under review by the New York State Department of Environmental Conservation (NYSDEC). According to NAG, the DEC disapproved the initial study released by the property owners in March, and a modified version was released in April. Once the DEC comes up with a Proposed Remedial Action Plan, the public will have an opportunity to provide comments. If you live nearby, you’ve got some skin in the game, because a botched or incomplete remediation process could expose residents to dangerous, potentially cancer-causing chemicals that have been lurking beneath the ground for decades. As our own Aaron Simon has explained in the past, these things have a way of getting botched.

Over on West Street (specifically from Quay to Eagle, and from Franklin to the waterfront), developers are roughly 60% of their way through the water-maining process. Sewer work will be next, and then some streetscaping (that’s sidewalks, trees, and a bike lane on the East side of West Street). It’ll all be over (hopefully) in Fall of 2017.

If you were sad to see all those trees go on West Street, representative Ian Thornell (the Community Construction Liaison for the NYC Department of Design and Construction (DDC)) says we’ll get more trees than we lost. As some pointed out, not all trees are created equal, however. It’s unclear whether we’ll get a bunch of saplings to replace their leafy, mature predecessors.

Some nearby residents have been unpleasantly surprised to see sediment in their water, which is what happens when construction companies flush the pipes. If you forgot or didn’t know to shut your water valves, letting the water run for a bit should eventually fix the issue. That said, construction companies don’t have a great history of providing sufficient notice.

In case there was any confusion, the waterfront esplanade that’s part of the Greenpoint Landing project will be open to the public. And yes, they’re using real grass.

Ground has officially been broken for one of two high-rises coming to Commercial Street via Brookfield Properties. The work on that building is expected to take place between April 2016 and January 2019, with work on the second tower scheduled for the 2017-2020 window. However, the next phase of the foundation excavation that’s been underway for the last couple weeks is expected to be “more intrusive for the neighborhood,” said Brookfield’s VP Construction Dan Berger. You can thank the nature of the soil and bedrock.

Many residents complained about the lack of parking around construction sites, where spots are often reserved for the workers. “I’ve driven to Williamsburg and back looking for parking before,” said one resident. One question without a particularly reassuring answer from developers: whether all these new buildings will provide enough parking spots for the influx of new neighbors they’ll bring. The writing on the wall is that things are only going to get worse for car owners: “the ratio is not 1:1” for parking that’s included with new construction, said Berger.

Hurricane Sandy was a sewage overflow nightmare. One thing Brookfield is doing to mitigate future flooding is installing new dedicated sewer lines. It’s also raising the elevation of the building entrances. However, it’s unclear what the actual evacuation plan would be for all those new residents living in Flood Zone A.

The toxic underground plumes coming from the NuHart site, which contain phthalates and trichloroethylene (TCE), has been creeping slowly toward the playground across the street. According to Levin, that plume has barely moved at all over the last two years, but many residents are worried that all the drilling will disturb and mobilize the viscous substance. A “very rigorous and specific tracking process” is in place to monitor the situation, according to the Office of Environmental Remediation’s Chief, Superfund and Brownfield Cleanup Section Jane O’Connell. However, even with all the tools available to us today, it’s not an exact science. See above re: why that public comment period is so important.