The former impending office and manufacturing development known as 12 Franklin St. is now on hold as the developer who purchased the lot three years ago for $24 million has relisted the property for more than double their investment, the Commercial Observer reports. END_OF_DOCUMENT_TOKEN_TO_BE_REPLACED

The sale comes just three years after the building changed hands for $10.9 million when a Joseph Brunner-managed LLC picked up the property. END_OF_DOCUMENT_TOKEN_TO_BE_REPLACED

The existing three-story building at 996 Manhattan Ave. is slated to be demolished for a seven-story development by BHLD Capital, who neighbors say is not doing their job to keep the site in order until work begins. END_OF_DOCUMENT_TOKEN_TO_BE_REPLACED 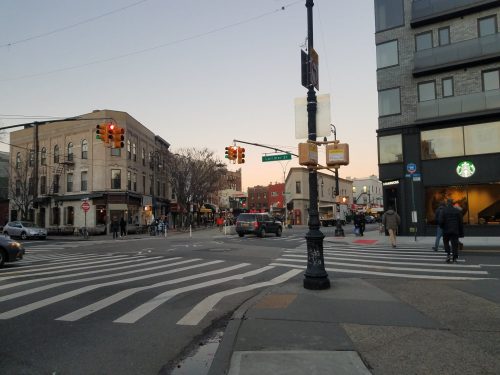 Albany is currently debating rent reforms to help solve the ever-worsening affordable housing crisis in NYC, and two new reports show that apartment rental prices have reached historic highs in Brooklyn and Queens, with the exception of North Brooklyn, and retail rents are dipping in Williamsburg while rising in Greenpoint.

The StreetEasy Q1 2019 Market Report shows that rents “in Brooklyn and Queens reached all-time highs of $2,608 and $2,173, respectively.” A 0.5 percent decrease in North Brooklyn’s rental prices is linked to the L train debacle and the uncertainty that the Canarsie Tunnel repair schedule caused.

The full Q1 findings for Brooklyn:

END_OF_DOCUMENT_TOKEN_TO_BE_REPLACED

The two incongruent Tetris-esque buildings are part of the 10 building, 22-acre Greenpoint Landing development, bringing 5,500 apartments to the northern-most area of the neighborhood, abutting the  Nuhart Plastics Superfund site and on a Zone 1 hurricane evacuation area (most prone to flooding and future rising tides). One tower will be 30 stories and the second 40 stories with a total of 768,000 square feet of residential space and 8,600 square-feet for retail. END_OF_DOCUMENT_TOKEN_TO_BE_REPLACED

“Bath Haus” Renderings of the Under Construction Huron Street Bathhouse

Sales have officially launched along with the release of new renderings of the”Bath Haus” condo development by Caro Enterprises. The luxury development is currently under construction at 139 Huron St. with 9 units hitting the market ranging in price from $750,000 to $3,300,000. The architectural firm Perkins Eastman is behind the redesign and have a global portfolio spanning the Hilton Lagos in Nigeria and the Abu Dhabi Court Complex in the UAE.

A state mandate in 1895 required the construction of public baths in cities with more than 50,000 residents. The city’s poor were previously given access to floating baths off the shores of the East River, but they fell out of favor due to unsanitary pollution.

Greenpoint’s former Huron Street Bathhouse was built 1903, opened 1904 and closed 1960, it’s completion was a result of the City Beautiful Movement, which inspired ‘beautiful’ public architecture and increased municipal amenities to improve the living conditions of the city’s poorest residents.

25 baths were built in the Classical Revival Style around NYC with seven constructed in Brooklyn. All were based on the baths of ancient Rome. END_OF_DOCUMENT_TOKEN_TO_BE_REPLACED

The residential high-rise construction along the contentious Greenpoint and Williamsburg waterfront is moving forward during the frigid winter months with towers advancing toward completion.

On the South Williamsburg waterfront, the rising towers at 1 S. 1st St. are being structurally connected, as YIMBY reports.  When completed, the conjoined building will have 330 apartments (66 will be affordable) spanning 462,000 square feet directly next to Domino Park. The completion date for 1 S. 1st St. hasn’t been announced but the incongruent tower will count as the second residential building at the former Domino Sugar Factory, where two more towers are planned at the southern end of the site.

1.2 miles north of S. 1st St. along the waterfront, “The Greenpoint,” is “awaiting imminent completion” according to YIMBY, and the 392-f00t-tall shiny glass tower is currently open for leasing/selling with 500 condos and rentals. A one bedroom rental at the namesake 39-story tower is going to set you back as much as $4,020 per month.

END_OF_DOCUMENT_TOKEN_TO_BE_REPLACED

After 97 – 99 Clay St. was sold to developers in 2014, the 25 rent-stabilized tenants in the building reduced to five, following what current tenants claim has been a sustained effort by the new landlords to push them out through untenable demolition and construction conditions. “The first thing that happened is that they changed the locks on Christmas day and didn’t tell us,” said Gretchen, who wishes to withhold her last name and continues to live in a rent-stabilized studio at 97 Clay St. despite alleged harassment.”We live between a halfway house and two homeless shelters and there was no front door for two months,” she said adding that one of the other tenants is a wheel-chair bound senior citizen, making him especially vulnerable.

OUR FRONT DOOR DIDNT CLOSE OR LOCK FOR TWO FULL MONTHS! This photo was on a Friday : Front door (only door with lock) fully removed at 5pm. All the workers went home for the weekend and left it this way, so that anyone could wander in off the streets. We were continuously told the door would be fixed “tomorrow” for 2 months. #rentstabilized #greenpoint

“They let everything get very run down and then started offering buyouts. They first offered me $4,000 and I said no.”

The new landlords originally planned to raze the building to make way for new construction, but with at least one tenant remaining in each of the buildings, the owners had to settle for renovations instead. Around February 2018, tenants say that demolition commenced and the living situation became increasingly hazardous. Complaints to the management company, Perfect Management, would simply result in a visit from the building’s super who tenants say has acted hostile toward their complaints. Perfect Management has not yet responded to Greenpointers.

I share this wall. Toilet, sink, mirror cabinet SMASHED TO PIECES WITH A CROWBAR while I was home, by the super. No demolition permit. He caused a huge leak in our hallway when he ripped out the toilet. Would you rent from these #SLUMLORDS #rentstabilized #greenpoint

END_OF_DOCUMENT_TOKEN_TO_BE_REPLACED

If you are dreaming of living in luxury directly on McGuinness Boulevard surrounded by gas stations in the footprint of a former Pep Boys Auto Shop, then you’re in luck. The city’s affordable housing lottery presents you the opportunity to apply for one of the 60 low and middle-income units at The Otto Greenpoint, a 197 unit “luxury” development at 211 McGuinness Blvd that markets itself as “community-forward.” The lottery is open through March 6.