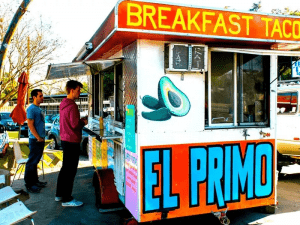 It’s music and food pairings at Weekend Music today. Where to find the best local wursts, feijoada, and gumbo, all with live bands to accompany the food.

Plus country rock, funk, and best bets at the WFMU Record Fair, below.

You know you pass by these places all the time: Radegast Hall. Manhattan Inn. Beco.

They are all popular with out-of-towners. They can get busy. But you know the reason is because their underlying concept is solid: Comfort food with live music.

Here are some good live music options at those places. On Friday nights, Joaquin Cotler plays improvisation-heavy piano blues to accompany dinner at Manhattan Inn from 8 pm until midnight.

If you have never been to the Inn’s stadium-like back dining room, you should go, it’s a very dramatic setting.

And for hot brats and cold good draft beer,  Radegast has live music going pretty much all weekend every weekend. I like Tipsy Oxcart playing this Saturday at 3 pm. The band’s fusion of jazz and Balkan zaniness will sound familiar to fans of the Slavic Soul Party.

If Radegast is full, Skinny Dennis and The Grand Victory are nearby, and both have live music starting in the late afternoon on Saturday. Skinny Dennis also has a vintage country jukebox, if you get there before the bands start.

Admittedly, there’s more to drink than eat at both Skinny and the Grand Vic. But you could make a pit stop first at Diner or Delaney Barbecue nearby.

For Brazilian food and music, Beco has the five-piece band Roda de choro playing on Sunday (5/1) between 5 and 8 pm. The good thing about having dinner at Beco is you avoid the typical wait at brunch for this tiny eatery.

OK, now that I’ve got everybody fed, let’s see what else looks good for music this weekend. Tonight (4/29), although it’s outside the neighborhood, it’s worth catching rock legend Eric Ambel live. At 8:30 pm he’s having a record release party at Berlin, just over the Williamsburg Bridge on Avenue A.

Saturday (4/30), there’s no need to leave North Brooklyn. The Pale Green Stars are one of the best country rock bands out there now, and they are New York’s own, by Syracuse way. Here‘s a sampler, where you won’t find one dud track.

The band will be at Black Bear Bar on Saturday, that crazy place on N. Sixth St. with its own skate bowl. They play last in a lineup of four bands that start at 7.

Also on Saturday, The Hall at MP continues its excellent curation of Big Easy-type bands. The Screaming Headless Torsos need no introduction to devotees of party funk. It’s a great choice if you want to down some Hurricanes and dance on Saturday night.

On to the annual WFMU Record Fair, taking place all weekend at Franklin Ave. at that expo place near Word bookstore. As usual, the fair organizers have found some obscure but cult favorite musicians to play live, including ’90s Australian alt-music band The Moles, appearing Saturday around 3 pm, and jazz and funk saxaphonist James Chance at 3 pm on Sunday.

Here’s some vintage footage of Mr. Chance when he was touring with his backup band The Contortions.

Possibly most intriguing, though, is the film lineup the festival has scheduled this year. It includes, of course, the recent documentary on the history of WFMU, Sex and Broadcasting, at 2 pm on Saturday.

The movie This Ain’t No Mouse Music! has received many favorable reviews, and it screens at 2 pm on Sunday. It’s about Chris Strachwitz, who is famous for scouring the back roads of the U.S. to find music outside the mainstream, and popularizing it through his record label. Here’s the trailer.

My favorite movies at the record fair, though, are always the bizarre films, like Spider Baby, showing at 10 am on Saturday, a horror comedy that includes the following, according to the WFMU website: “inbred orphans, a bizarre genetic disorder, a lecherous half-wit, a disputed inheritance, and Lon Chaney Jr.”

And here is their description of Meet Peg Bordelon, playing at 4:50 pm on Sunday:

This series of vignettes follows phony Women’s Studies major and southern transplant Peg Bordelon, who skulks through the streets of Brooklyn looking for attractive young ladies to be in her film, a celebration of female sexuality titled “Ass and Titties”. If this doesn’t sound hilarious to you, please do not watch this film.

For all the other weird stuff happening at the fair, visit the full schedule here.