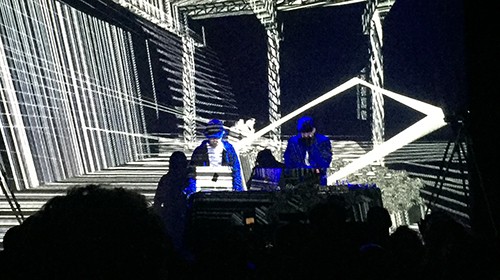 LA-based DJ Nosaj Thing (Jason Chung; “Nosaj” is “Jason” spelled backwards), and Japanese artist and VJ Daito Manabe threw down an intense collaborative set at Music Hall of Williamsburg this Monday night. I’ve been a peripheral fan of Nosaj Thing for years, seeing him at a festival or two, and been an occasional listener. But this show was proof that he’s an artist with some diverse musical chops.

Walking down North 6th Street towards the venue, as I’ve done hundreds of times, I was reminded of how much the street has changed in the past ten years since I moved to the neighborhood. You used to walk down there at night and see nothing much but warehouses and blackness leading up to the East River. Now, a pair of tall buildings light up and frame the horizon. Tops market (once the only good grocery spot around) is closed and covered in graffiti; Galapagos Artspace is long gone; now there’s the Urban Outfitters, a specimen of hipster perfection housing a basement record shop and rooftop restaurant; there’s a Madewell, and some other higher-end shops and a smattering of new and revised bars. And of course, the OG venue Northsix, where a handful of epic acts (Sonic Youth, Broken Social Scene, Yeah Yeah Yeahs, Joan Jett, Animal Collective, Queens of the Stone Age, and Elliott Smith among others) used to play in a tiny sweaty basement, was replaced by Music Hall of Williamsburg in 2007. 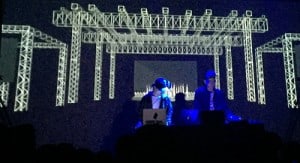 Knowing and having lived through all this transformation, Nosaj Thing and Daito Manabe’s performance and visuals resonated with me on a somewhat nostalgic level. Their set started out with house beats transitioning into deep house, as visuals that looked like architectural diagrams for a fantasy stage set in The Fifth Element were projected behind them. Small cameras on the sides of the stage captured the guys’ live movements and built an entire abstract universe behind them, and that universe was constantly changing and moving as if we were all inside The Big Bang happening in real time. And it made me think: sometimes living in rapidly changing North Brooklyn feels like this, too. The area is infinitely exploding.

As the deep house rhythms transitioned to hip-hop beats, they served up ear-shaking bass that made my nostrils vibrate. Back in the days of Northsix I was too cool to wear earplugs, but these days I’m older and give less of a fuck so I didn’t mind putting them in. At times, what they were throwing down sounded like the kind of music you’d blast out the trunk of a car tricked out with rims and hydraulics. The audience was suspended, even just for a moment, in the bowels of a djembe drum while constellations spun around Nosaj and Daito as the projections behind them transformed their bodies into exploding pixels. 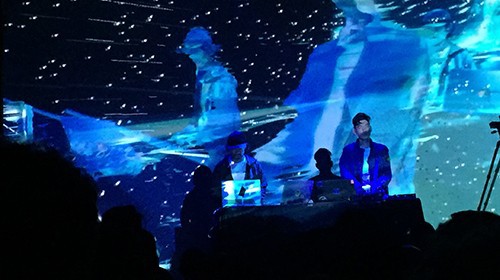 It’s the mark of an epic show if you see at least one guy bugging out. And I did see one guy shaking, jumping and screaming, surrendering himself to total euphoria as the noise quaked the floor and the visuals mutated the performers on stage. He was maxed out. So his buddies removed him from the dancefloor. I overheard him later at the bar as his pals were forcing him to drink water: “Fuck no, I’m not goin’ home! I bought tickets to a brain show!” Considering the source, “brain show” was an apt description.

After the gig ended without encore, I walked back down North 6th Street, passing by Sea Thai. I had flashed back to the first time I ever dined there in 2005 or 2006, with a couple girlfriends. We thought we were hot shit for going to a place where they filmed an episode of Sex and The City. As I was walking past, I overheard a bro dude wearing a collared shirt say to his buddy, “Hey man, you ever been to Sea? “

I silently scoffed at him. And then I realized, maybe I’m not that different than I was ten years ago and maybe the vibe of Williamsburg isn’t that different. No matter when you arrived, there’s always gonna be somebody else you can say this to: “I knew about that thing before you did, man.”