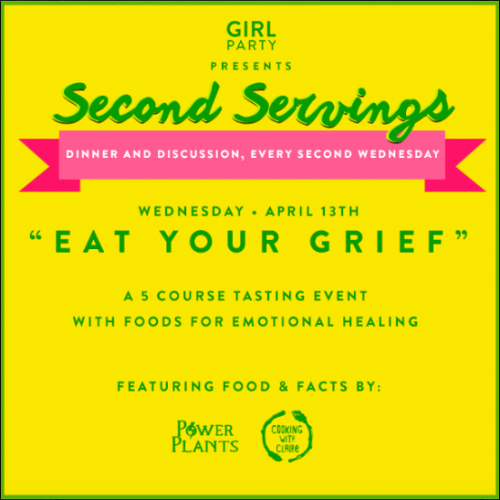 The Greenpoint-based group throws parties, dinners and events in Brooklyn, like this alternative Valentine’s Day dinner and the in-vogue yoga parties of our generation (in case you didn’t know from trips to neighborhood spots like New Love City and Maha Rose, yoga isn’t yoga these days unless it’s accompanied by things like tarot card readings, sage smudging, crystals, reiki, aromatherapy, past-life regression or witchy spells).

Together with Cooking With Claire, a local chef pop-up by Claire Phelan, and Power Plants Herbals, an herbalist company founded by Ray Edwards, Girl Party is throwing a dinner and discussion called “Eat Your Grief” as part of its Second Servings series.

“Recent studies have shown that specific nutrients in our foods can help manage, and even reverse, depression, along with anxiety, attention deficit hyperactivity disorder, schizophrenia, and even autism,” Girl Party writes. “So why is that so many ‘depressed, tired, overweight women’ are often told they need Prozac when in fact all they really need to get their brains and bodies on track is a steady supply of real food?”

The five-course dinner will serve foods known to support healthy moods and relieve stress and anxiety (might there be kava?). Chef Claire Phelan started thinking about the concept a couple months ago, after she received the Assouline cookbook “Food & Life,” co-authored by world-famous chef Joel Robuchon and acupuncturist and neuropharmacist MD, Nadia Volf. After being inspired by their recommendations on foods for mental health, she began researching and reading scientific studies. Her resulting dinner will feature salmon to boost cognitive function, bell peppers for higher dopamine, norepinephrine and epinephrine levels, pineapple for the amino acid tryptophan, which the body uses to produce serotonin, curry because tumeric helps the brain produce new cells, and black pepper for depression.

Vegetarian options are not available. Alcohol and caffeine will not be served, but will you need it after you’re high from all the delicious food?

The dinner will be held in Greenpoint, at an undisclosed location to be revealed upon ticket purchase. Get tix here.