House of Vans to Resolve Marital Discord this Saturday (1/16)

You know the old adage, opposites attract. Admit it, you know of at least one couple where that’s the case. Maybe you are that couple.

She plays lead guitar in a band, he’s a librarian. Or she’s an art critic and her girlfriend is a day trader who skates on the weekends.

Then you know what happens when the weekend comes around. One person wants to do something high-minded, like go to a play or gallery opening. But it’s the weekend and the other person protests that that’s the time to blow off steam while watching football.

I met up with a friend at the Piper’s Kilt a few years back, a storied Irish bar in the Inwood neighborhood at the northern border of Manhattan.

I asked him why he hadn’t had a girlfriend in a while.

He looked up at the TV behind the bartender, then looked at me, and said, “I like sex as much as the next guy.”

“But then I think, I’m drinking this Guinness, and watching the Yankee game, and this makes me happier than any date I’ve ever been on.”

This Saturday, House of Vans on Franklin St. is doing their best to resolve the classic hi-lo couple culture clash.

We start with the first half of the couple (uh, me). The one who wants to camp out on the La-Z-Boy on Saturday and eat nachos with queso.

At Vans, he’s going to get to watch some dumbass on a skateboard face-plant on the venue’s indoor skate ramp. Draft beer will be served. 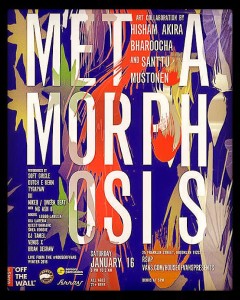 All the while, he gets to play romantic hero for the weekend, because his girlfriend is checking out the Bharoocha / Mustonen / Dave and Gabe art collaboration at the same venue.

According to the Vans’ press release, the exhibit is an “immersive, large-scale floating tunnel featuring kinetic light animations playing with a variety of interactive elements including space [and] light.”

The artists’ themes are “the changing light of the day, the idea of a mutation, and ever-evolving human beliefs and progress.”

A full lineup of “counter-culture music and dancers” will complete the experience.

Apologies, I don’t mean the artists, that exhibit sounds kind of cool. I’m just dreaming about watching the skaters wreck themselves on the ramp.

Also, I just like a place where the house rules include: No weapons or fireworks, No spray paint or markers or pens, No selfie sticks, No in & out (oh yeah), and No Strollers.

You can RSVP here.

For salvaging your relationship for at least one more week, you are very welcome.