Listen While You Can: The Hum Returns to Manhattan Inn

Two weeks ago, Nandi Rose Plunkett of spectral pop Half Waif and Johanna Cranitch of synth-pop White Prism returned to Plunkett’s apartment in Crown Heights with iced teas in hand to find an image of Frida Kahlo taped to the door. On the back was a message from a neighbor, Emily Chapman, whom Plunkett had never met. Chapman had been working from home and heard a song Plunkett and Cranitch were performing. She wanted to know how she could buy it.

Cranitch and Plunkett had only just met in person for the first time earlier that day. The song they had been playing and singing was freshly written in preparation for their collaboration for The Hum, where the song would likely be publicly shared for the first and only time. This is the magic of the popular series – seasoned musicians coming together to work on new material to create a truly special experience.

“Emily left her email address on the note, so we corresponded and I let her know about The Hum show,” said Plunkett. Chapman and her husband came to the event last Monday where Cranitch gave her a shout out by relaying the story and thanking her. “The note was so earnest and filled with encouragement—it was exactly what we needed on our first day of collaboration,” Plunkett gales.

“It’s a challenge to create and be vulnerable with someone in that way anyway. Throw someone you never met into the mix and it becomes all the more challenging,” explains Cranitch who found the idea of The Hum very appealing.

Cranitch was introduced to Rachael Pazdan, founder of Hypnocraft, through her manager Eric Sosa. “[Rachael] told me that it was about strengthening our musical community in New York and having an opportunity to create with people we’ve never worked with before. That part was exciting.”

Pazdan paired Cranitch with Plunkett, whom she had met around the time of the Spring series of The Hum. Plunkett had seen promotional information about The Hum last March and knew many of the musicians who performed. She had also begun running a monthly concert series for the non-profit Found Sound Nation, which brings together musicians from different musical genres and backgrounds, and she was intrigued by the premise. Plunkett asked a mutual friend to put her in touch with Pazdan.

“I was so inspired by what she was doing, by the community she was creating and supporting, and by the high caliber of artists who were involved,” Plunkett said. A primary reason for Plunkett feeling inspired is that it provides a new platform for women in music, but “Rachael is very careful not to brand this as ‘women musicians collaborating for the first time’ but rather as ‘musicians collaborating for the first time.’ It becomes obvious pretty quickly that everyone involved is a woman, but she [doesn’t] focus on that.

“On the other side of the coin, if it were just ‘musicians collaborating for the first time,’ without the careful curation, I’m sure it would be a pool of 90% male musicians, because that’s the way the scene breaks down. So I think what Rachael is doing, admirably, is fostering a community of women artists who can support each other, learn from each other, and gain confidence in a male-dominated industry, while de-emphasizing the hierarchy of gender in music-making altogether. I was super honored when she asked me to play in the October edition of The Hum.”

Cranitch and Plunkett didn’t know each other prior to being paired and were grateful for the opportunity to work together. “I was so pleasantly surprised,” Cranitch said, “looking at the entire night, Rachael definitely has a knack for pairing people together based on their musical taste.”

“It was a pure stroke of genius on Rachael’s part to pair us together, because our voices are really similar and we hit it off immediately,” shared Plunkett. ”Johanna has such an infectious energy and is a super talented songwriter. I learned a lot from her during the week we worked together.”

Among all of their various projects, Cranitch and Plunkett were only able to spend the six days leading up to the event to prepare, so it was increasingly impressive to learn that they wrote six songs in six days and after the first half of day one, an upstairs neighbor asked how she could purchase their music. “[The songwriting process was] blissful, therapy, heart warming. It lit the flame again for me to write. Nandi was so enthusiastic and giving of herself and it was so infectious. I was a little tired going into it. Tired of the hustle I guess. I feel like hustling again after being in Nandi’s presence for a week.”

The Hum continues to be a beautiful event for audience members and musicians who leave wanting an encore. Plunkett posted a message on Facebook saying “We met last Tuesday, we wrote 6 songs, we became best friends, we played a show, we will meet again. I <3 u, White Prism. Let’s record these lil jams asap!” I hope they do, otherwise it’s like hearing a song once and wanting to hear it again, but not being able to. 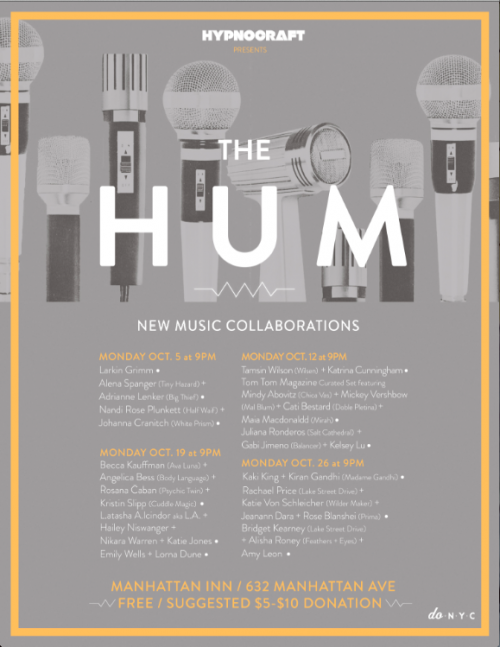 I asked, “have you ever had the experience of hearing a new song once, like in a coffee shop or in someone’s car, and wanting to hear the name of it or musician so you could find it again, but not being able to?”

NRP: That doesn’t happen to me so often anymore, because I can usually just Google a tiny snippet of the lyrics and then find out who it is!

But nothing beats that moment of discovering something new – even if I can’t track it down the rabbit hole, hearing a sound that is unfamiliar and moving is the most exciting thing. It just happened to me tonight, actually! Driving through the Bay Area, my friend and I heard a piece come on the radio. It was instrumental, and we were trying to place it – Celtic? Middle Eastern? Finally, the radio announcer came on and revealed that it was a piece of music from Albania. Never heard that before! I don’t know what the piece was called or who wrote it, but just hearing that new configuration of scales and sounds has clearly stuck with me.

Catch The Hum by Hypnocraft every Monday starting at 9:00 pm in October at Manhattan Inn. Free with a suggested donation of $5 to $10. All donations go to the musicians. Follow Hypnocraft on Twitter, Instagram, and Facebook.

Sonya is most drawn to voices, sounds, and lyrics that tell vivid and compelling stories. Her playlists include everything from folk, country, rock, and pop to hip hop and R&B, to blues and jazz. She will fly hundreds of miles to hear something live that piques her interest. (Instagram: @sonyacpatel Twitter: @sonyacpat)
View all posts by Sonya Patel →