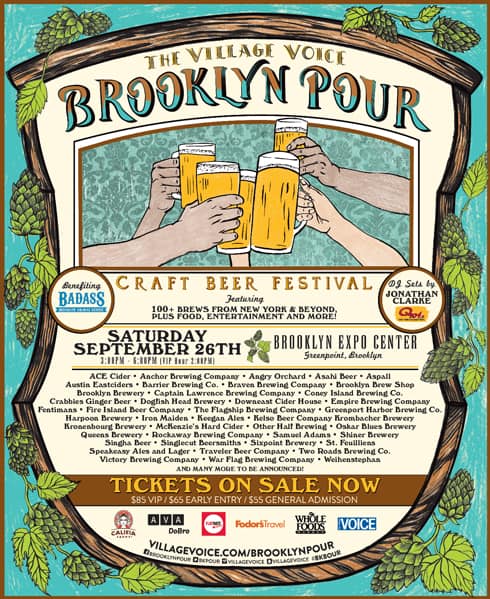 Featuring over 100+ craft brews from New York & beyond, The Village Voice is hosting the fifth annual Brooklyn Pour Craft Beer Festival on Saturday, September 26th from 3:00PM–6:00PM at Brooklyn Expo Center in Greenpoint. Craft beer aficionados will sample the best seasonal, micro and reserve brews from breweries located in the country with a pinpointed focus on the tri-state area. Plus there will be food, games and more!

We have a pair of General Admission tickets ($110 value) to give away.

To enter: In the comments, tell us what your favorite craft beer is.

A winner will be chosen randomly and will be notified by email Tuesday (9/8).

The Village Voice is proud to partner with Badass Brooklyn Animal Rescue for Brooklyn Pour 2015. A portion of this year’s proceeds will be donated to the charity, which is a 501(c)3 non-profit, all-breed dog rescue composed of a network of fosters and volunteers who work together to rescue sweet, loving, adoptable dogs from high kill, rural shelters in the southern U.S. states and get them adopted into wonderful forever homes.

VIP, Early Entry and General Admission available now! To secure your spot, visit villagevoice.com/brooklynpour to buy tickets. Greenpointers readers get an exclusive neighborhood discount. Enter “GPOINT” to get $5 off admission.